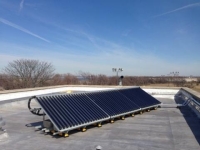 Solar hot water heating is the redheaded stepchild of the renewable energy world. Most people have no idea what it is. Or, they confuse it with its attention-grabbing cousin, solar photovoltaics, the solar panels we all know about that convert light into electricity and glint on a rapidly increasing number of American roofs.

Despite its obscurity, solar hot water heating is a great technology — cost-effective, pollution-free, climate-resilient. And that’s why we’re celebrating New York City’s recent installation of solar hot water systems on the roofs of five firehouses in the Rockaways section of Queens. All five had been damaged by Hurricane Sandy, with four of them suffering from extensive flooding that required repairs to equipment housed in their basements, including furnaces and boilers. 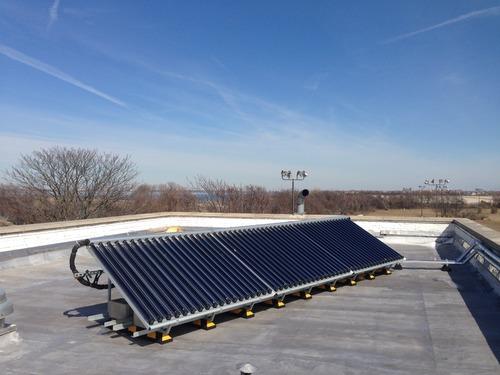 A new climate-resilient, solar hot water heating system on the roof of Engine Company 329 in New York City’s Rockaways neighborhood will not only save New York money and cut greenhouse gases, it will make sure firefighters have access to hot water when they need it most.

That’s where solar hot water heating is coming to the rescue. “The firehouses in the Rockaways are ideal sites for solar hot water heating,” explains Kristin Barbato, Deputy Commissioner of the city’s Department of Citywide Administrative Services, which initiated and financed the project. (The project was managed by the New York Power Authority, the state’s public power provider and a national leader in energy efficiency.) “Firehouses,” Barbato says, “operate 24-7 and they use a lot of hot water for showers and laundry. The addition of the solar thermal systems makes each facility independent of the need to use natural gas or other fossil fuels to heat water for showers and general use.” In other words, should we face another storm like Sandy, Engine Companies 264, 265, 266, 268, and 329 will have functioning hot water systems when they need them most.

Current solar hot water heaters are based on a technology that’s more than 100 years old. (It was invented in Baltimore, actually, and was quite prevalent in the U.S. before it was supplanted by cheap hot-water heaters that use natural gas.) The heaters rely on a phenomenon we all know from parking cars in un-shaded spots: “Something left out in the sun is going to get hot,” explains Tim Merrigan, a solar hot water expert at the National Renewable Energy Laboratory. “If you put glazing over it, that’s going to trap the sun’s heat.”

The way the solar hot water heaters on the firehouse roofs work is relatively simple. Water from the building is piped up to the roof and then through a series of panels containing evacuated glass tubes. While inside the panels, the water absorbs the radiant heat of the sun. Then, it’s piped back down to a storage tank in the basement.

The savings, in both energy and carbon pollution, can be considerable. At the city’s St. Mary’s recreation center in the South Bronx, where a solar hot water system provides hot water for showers and the pool, the city is saving $39,000 a year on energy and cutting the complex’s carbon footprint by 141 tons a year—the equivalent of taking 27 cars off the roads.

The firehouse installations aren’t so much one-time events as a pilot program of sorts. “We’re taking steps to see how some technologies that might be newer to city government operations work and potentially expand them out,” says Barbato. The City of New York owns almost 4,000 buildings and other facilities—courthouses, wastewater treatment plants, police and fire stations, schools, hospitals, and libraries. “We’d definitely like to use these resources in other facilities that make sense—facilities with large hot-water usage.”

The work the city has already done in cutting its carbon emissions is nothing short of impressive. Between 2005 and 2012, under Mayor Bloomberg’s PlaNYC, greenhouse gas pollution from New York City government operations dropped by 19 percent, putting the city about two-thirds of the way to its 2030 goal. The new solar water heaters on five Rockaways fire stations are another step toward that important achievement, one that makes the city and its vital first responders more resilient and secure as we go.