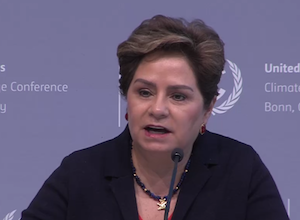 Speaking at the start of a new round of climate talks in Bonn, Germany, today, Patricia Espinosa, executive secretary of the United Nations Framework Convention on Climate Change, said the current climate pledges put forth by signatories of the Paris Agreement “simply aren’t ambitious enough.”

“A rise of this magnitude in the temperature would be extremely destabilizing and we can’t allow this to happen. That’s why this process — these negotiations — is so important,” she said in a live press conference webcast today. “During this round of negotiations, we are encouraging parties to increase ambitions by making progress on the Paris Agreement work program.”

Related: Does the UK Need a Net Zero Target?

During the talks in Bonn, participating governments will develop the guidelines — or operating manual — for implementing the Paris Agreement. The final decisions on the guidelines will be undertaken at the UN Climate Change Conference (COP24) in Poland at the end of the year.

During the press conference, Ambassador Luke Daunivalu, chief negotiator of the Fiji COP23 Presidency, echoed the sense of urgency from Espinosa.

He said the Fijian COP23 Presidency is focused on advancing the work program of the Paris Agreement.

“The work program must be completed at COP24, and any suggestion that they be delayed will delay overall response to the climate crisis,” he said. “We don’t have any time to waste.”