The Intergovernmental Panel on Climate Change warns the world must triple its use of renewable energy AND develop nuclear power to avoid the worst ravages of climate change. OK. But what’s the optimal percentage of each to develop? 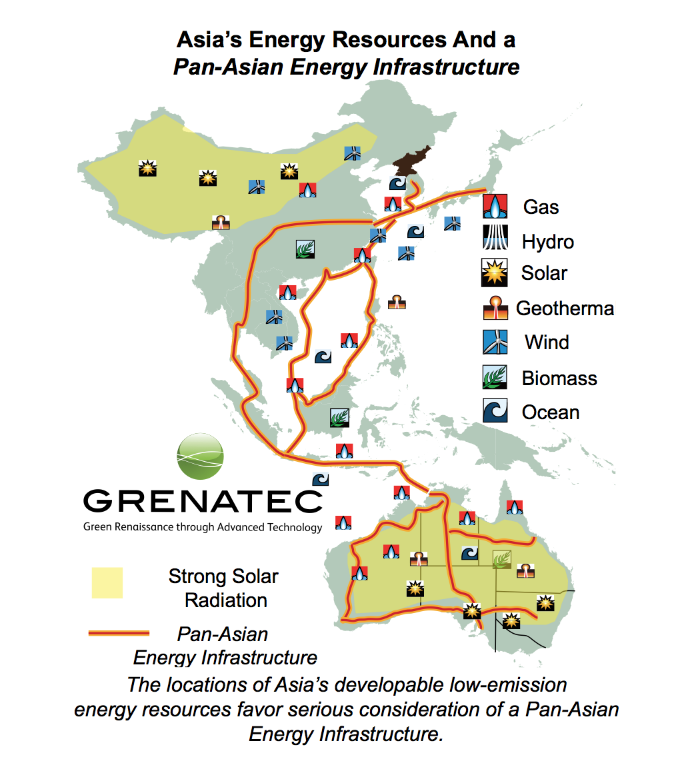 No one knows, but it’s time to think about this.  Take Asia — it has solar, wind, hydro, biomass, geothermal, wave, tidal and ocean thermal energy.

Like elsewhere, the question isn’t the availability of renewable energy resources — but getting them to market. As the world’s emerging dominant economic bloc, what Asia does in coming years will matter hugely to humanity in the second half of the 21st Century.  What should Asia do?

In making the low-emission energy transtion on both a regional and global level, building out the proper delivery infrastructure is critical. In coming years Asia needs trillions of dollars of infrastructure — much of it greenfield (newly built). This includes roads, rail, air transport and telecommunications networks.

But the largest percentage of Asia’s needed infrastructure, roughly half of it, is for energy. This includes not just generation, but power lines and gas pipelines. How and where this infrastructure is built will have a crucial impact on the pace and speed of Asia’s renewable energy resource development. This, in turn, will influence the global pace toward lowering emissions.

The good news here is that Asia’s renewable energy resources lie in a neat line stretching from Australia to China, Japan and South Korea.

Meanwhile, Australia’s Outback is perhaps Asia’s region’s richest single treasure trove of energy.  It has conventional and unconventional gas. It has oil and uranium. Most importantly, it has huge amounts of strong sunshine capable of generating solar power and growing biomass ranging from jatropha to algae.

Just north of Australia, big conventional gas fields lie in the Timor Sea. Indonesia’s eastern islands have geothermal and tidal potential. All of Indonesia has promise for biomass energy.

Further north, the South China Sea has wind energy, offshore gas and oil, the potential for developing methane hydrates and ocean thermal energy. China’s long coastline, particularly in the middle of the country, has good wind resources. Interior China has hydropower, as do the Mekong States.

Japan and South Korea are, relatively speaking, renewable energy poor, but both make up for it by being technology rich.

In a perfect world the best strategy would be to link up Asia’s renewable energy to a giant, frictionless, cross-border market that would sort out winners and losers. As it happens, something roughly along those lines already is starting to be built.

In the lead are the 10 small countries that make up the Association of Southeast Asian Nations (ASEAN). In a bid to carry more weight in the global economy, the ASEAN states they’ve been working to better integrate their small economies.  As part of this, ASEAN planners have drawn up the Trans-ASEAN Gas Pipeline and Trans-ASEAN Electricity Grid. These two projects will create a more integrated 10-nation electricity and natural gas market that will lower prices through greater competition, increase supply security through diversification and encourage innovation by ensuring better market access.

Over time, this infrastructure could be extended north to China, Japan and South Korea. To the south, it could be connected to Indonesia and Australia.The result would be the closest thing to a ‘perfect market’ for energy anywhere in the world. The benefits would be hard to overstate, particularly when it comes to developing new energy resources.

To make the transition from fossil fuels to renewables, fossil fuels need to become more expensive. Carbon taxes do this. China already has several operating urban carbon markets. More are planned. Over time carbon prices — applied ever more widely to Asia’s 13 billion metric tonnes of CO2 per year from the consumption of energy (one third the world total) — can be recycled into new infrastructure along the lines above.

Vehicles for this recycling could be the Asian Development Bank, which already operates a ASEAN Infrastructure Fund. Another vehicle could be the proposed Asian Infrastructure Investment Fund, into which China has hinted it might be willing to stump up $25 billion, half the bank’s initial capital.

Concepts for larger scale energy grids aren’t limited to Asia. The North Sea Offshore Grid Initiative is a plan to tie together the energy networks of the North Sea littoral nations.  Google’s has proposed a large array of wind farms off the US East Coast stretching from New Jersey to Virginia.

Progressively interconnecting cross-border electricity grids and natural gas pipeline networks represents an excellent start. Since the 1990s, the Internet has demonstrated the power of frictionless networks in telecommuications. It’s now the energy industry’s turn for a similar transport revolution.