New Hampshire, USA — Raina Russo drives through the ravaged streets of her coastal neighborhood in New York, dodging downed trees and aware of the constant sirens that indicate emergency workers are responding to yet another fire. This is what she calls her “new normal” in her life post-Sandy.

Two weeks have passed since “Superstorm” Sandy ravaged the Northeast, and according to Russo, it’s been, and still is, an eye-opening experience. Living like a gypsy, she and her family have been on the move looking for a bed to sleep in each night. Today was a lucky day — she finally found a rental where they can settle in for consecutive days.  Her beachfront property was flooded during the storm, her cars totaled, and her electricity and heat are still off and not expected to return for another few weeks.

Her trials have influenced this week’s #SolarChat, a bi-weekly Twitter-based solar conversation that Russo introduced more than one year ago. Russo wants to know what everyone is saying about the Hurricane Sandy situation (she hasn’t been able to follow media reports since the storm hit), and thinks this week’s topic on climate change and solar solutions will generate an interesting discussion.

Reflecting on her own experience, Russo says she has come to realize our true dependence on power and how it affects our lives.

“You think of power and you think you’ve lost electricity in your home, refrigerator, heater, and so on. But it’s so much more than that. We lost power and cell service dropped; we were up against a gas shortage because the pipelines turn off during the storm and during loss of electricity,” Russo explains. “So you have no power, and all of a sudden you have no communication and no transportation – and you have no means of even operating generators that weren’t flooded because of the gas shortage. Its such a compounded situation, and it’s all about power.”

Despite her difficulties, there is one part of Russo’s property that seems to have made it through the storm unscathed: her 10.4-kW rooftop solar system. Pending a full system check from Mercury Solar Solutions, her installer, Russo says it looks like her inverters are high enough to have avoided flood damage, and her panels withstood the Hurricane-force winds and remain intact. And Russo isn’t the only solar customer amazed at the integrity of their panels; there are several stories of rooftop panels surviving the storm, and some even credit the panels for providing extra security to the roof. There are also reports on larger solar farms (and other renewables) that sustained minimal impact.

Russo lost electricity because her system is tied to the grid; during outages most systems shut down to prevent power from feeding into power lines, which endangers workers that may be out for repairs. This got Russo thinking about storage solutions. She says she hadn’t thought about storage until Sandy, but after speaking to friends and neighbors who own top-of-the-line generators that were flooded and, ultimately, unusable, Russo thinks she should take her existing system to the next level.

“Storage is going to be my first priority in my [home] rebuild process. I need to consult with people on this because I’m not an expert, but why would I invest in a gas generator,” says Russo. “Our panels are on our roof, supposedly they are not damaged, the inverters are high enough that they are not getting damaged either, so if we had storage, that could act as our backup generator.”

Solar companies are starting to catch on to this necessity. SolarCity now offers an energy storage system with its installations, and claim that during a utility outage, the battery system will allow for up to three days of power for basic needs. It can even reduce utility bills by providing power at night instead of drawing from the grid.

Russo believes the storm has given the solar industry the perfect opportunity to break out into the mainstream and expand. “We’re talking about a tri-state metropolitan area of people. This is the time for us to capitalize on it. Everyone is aware that this isn’t an once-in-a-lifetime storm as we’ve always been told. That’s why we need to discuss climate change,” says Russo. 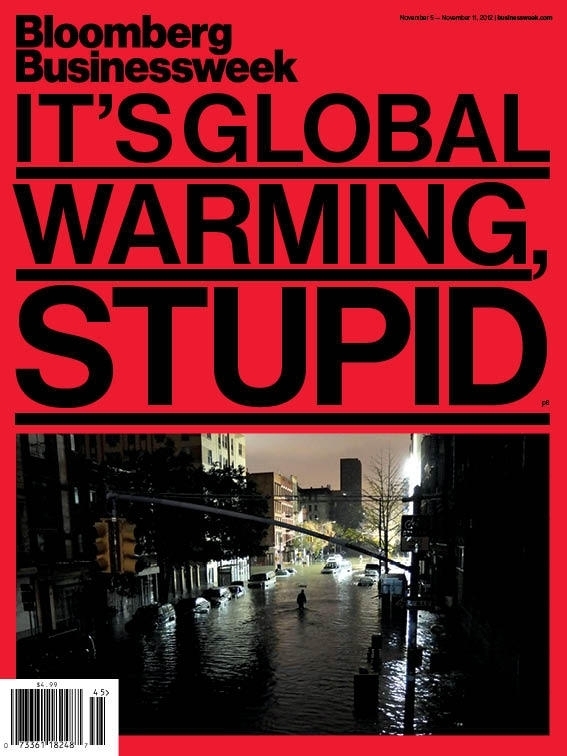 It seems like the some in the media agree. A few days after the storm passed Bloomberg Businessweek issued a blunt, straight-to-the-point headline on the cover of its magazine with a photo of a flooded, powerless New York City street: “It’s Global Warming, Stupid.” While the debate continues to go back and forth amongst political pundits, it’s clear that people are starting to pay more attention, and Russo believes solar needs to enter the discussion.

“No one wants to go through this nightmare again, so many people are going to be investing in something,” says Russo. “If people know that they have no choice but to invest, they should put their money into solar. It can solve a lot of the climate change problems that we’re dealing with to begin with, and acts as support during a storm.”

Hurricane Sandy has certainly provided us with major questions and opportunities: renewable energy solutions, climate change, grid modernization, energy storage…the list goes on. All of these topics will be discussed this Wednesday at 2 p.m. during #SolarChat. Panelists include Stephen Lacey, deputy editor at Climate Progress (@Stphn_Lacey), Elisa Wood, energy journalist and regular contributor to RenewableEnergyWorld.com (@ElisaWood), and of course, #SolarChat creator Raina Russo (@EcoOutfitters). Come share your thoughts on climate change, solar solutions, and your own Hurricane Sandy experience – register here. If you have any questions for panelists, feel free to post them in the comments below.

“This is a real issue and somehow the solar industry needs to capitalize on the fact that it’s now the topic of conversation for everyone. Plus, it’s helping with climate change, which is something that definitely contributed to the enormity of this storm and the frequency of the storms that we are going to be faced with,” says Russo. “I think it’s a new kind of messaging that we can use to penetrate to the mainstream that is now looking for answers.”