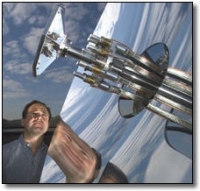 Washington, DC, United States [RenewableEnergyWorld.com] Today, in this mostly urbanized society, over 1 billion people live without clean drinking water. As grain prices continue to rise, hundreds of millions of others barely have enough money to pay for food. Meanwhile, global oil production may have peaked, atmospheric greenhouse gas emissions are reaching alarming levels and there are billions of emerging middle-class workers in developing nations who are getting turned on to American-style consumerism.

Do these trends signify a looming global crisis or an enormous economic opportunity? The 500 investors and analysts at this week’s Cleantech Forum in Washington D.C. say both.

As the saying goes: “A crisis is a terrible thing to waste.”

“The green economy is the mother of all economic opportunities,” says Lois Quam, Head of Clean Technlogy and Renewable Energy Investments at Piper Jaffray. “This transition presents such a broad and diverse set of challenges for business, it’s really remarkable to think about what needs to be done.”

Quam, who will be the keynote speaker at the New Jersey Clean Energy Conference in October, says that investors seem ready for the challenge.

So far this year, US $1.6 billion in venture capital has been invested in the cleantech space in the U.S., according to figures released in August by Ernst and Young. Investments in the second quarter of 2008 represented an 83% increase over the second quarter of 2007. Most of that venture capital went toward thin-film solar, concentrating solar power, energy efficiency technologies and next-generation biofuels.

The impressive growth in cleantech venture capital is partly being driven by the entrance of mainstream investors into the space. Back around 2002 when the term cleantech was first coined, the investments were made by funds dedicated to the space. Now, says Brian Fan, Senior Director of Research at the Cleantech Network, the game is being changed by new players.

The wave of investment in renewables, energy storage, advanced materials and many other clean technologies is transforming a once-niche industry into an economic powerhouse. Cleantech venture capital has increased 1,000 percent since 2001. But with increased interest comes increased caution. The immense rush of capital moving into the sector has some worried about the formation of a bubble.

“We’ve seen waves before. They can create a constant cycle of excitement, bust, excitement, bust,” says Michael Goguen, a venture capitalist at Sequoia Capital. “The important question is how do we create our companies and make investments so they survive and have an enduring impact on the world?”

Many analysts say that talk about a dotcom-like bubble may be overblown. There will certainly be many losers among the winners, but the cleantech market as a whole looks healthy, says Fan. The problems from the internet bubble — when companies were assigned asset values without any real revenue generation — are not nearly as common in the cleantech space, he says.

“These are not companies…trying to assign some mythical valuation to eyeballs. These are actual manufacturing companies or service companies that have real world products to offer. And even though some spaces are are a bit frothy, I don’t think overall that we’re seeing that great separation from reality that we saw in the tech space around 10 years ago,” says Fan.

That’s mostly what the Cleantech Forum is all about — identifying the best investment opportunities for early-stage investors while educating entrepreneurs about how to develop their business models in a sustainable way. Like any market, the businesses that win out will be the ones that use less capital with less people, assemble a knowledgeable executive team, and quickly get their product to market.

“It’s not always the best technology that wins — you have to have the whole package. It is definitely about creating a sustainable company,” says Scott MacDonald, a Partner with Emerald Technology Ventures.

Indeed, the future of the world depends on creating a sustainable industry based on sustainable companies. Many investors recognize the need to make smart decisions not just to maximize economic returns, but also societal and environmental returns.

According to the Global Footprint Network, September 23rd will be Ecological Overshoot Day — the day that humans start using resources faster than the planet can regenerate them. Industry leaders hope that the continued growth in cleantech investment can help reverse humanity’s ecological deficit spending.