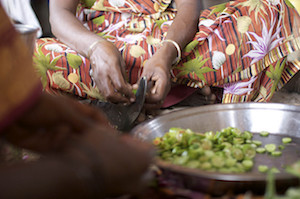 Historically, lighting was the driver for electricity systems. Edison lit up Manhattan, New York. But now, with solar panels and a variety of LED fixtures, from nightlights to lawn lights, street lamps to traffic lights to ceilings bulbs (if we may call them that), illumination at night, even for the poor, is largely a solved problem. And the grid is optional; local electricity networks will do. For example, Nancy Wimmer’s book, Green Energy for a Billion Poor, describes how Grameen Shakti, using Solar Home Systems (SHS) addressed Bangladesh’s illumination problem. Light for everyone at will — this is an accomplishment of the order of eradicating smallpox.

In the inaccessible parts of the campus of the Indian Institute of Management Kozhikode (IIM K), where I was faculty, we lit up steep walkways on hills with roughly 8-watt LED lights, solar panels, and batteries. The walkways, hitherto seen as unsafe due to sightings of snakes and scorpions on them, are usable at night now.

For increasing the world’s welfare to the next level, two solar-powered electricity applications appear critical, a) clean cooking, b) charging e-bikes, e-motorcycles, and EVs. Why? Done right, solar systems designed for cooking, as well as for transport, will drive the virtuous cycle of more numerous and more powerful solar deployments, which will bring in its wake more access to lighting, fans, phone and tablet charging, laptop use, Internet access, refrigerators, and more. With solar electric cooking, to extend the disease eradication analogy, we address tuberculosis.

For those on the renewable energy path, one fatal flaw is under-designed systems. This was amply illustrated by the case of Greenpeace’s Dharnai village microgrid in Bihar, India. It focused on providing lighting, and implemented it successfully. But, instead of being grateful the villagers complained that it did not give them all the services of the regular grid. As it relates to electricity access, something is not always better than nothing. Rather, all villagers wanted a fully functional system that can handle refrigeration and fans, TVs and air-conditioners, over time, and at their pace. After all, that is the benchmark set by the regular grid. Or nothing; the status quo. Solar power was perceived as an inferior solution, foisted on the villagers, who thought they were treated as second-class citizens.

From this perspective, the Dharnai grid failed. The lessons are momentous. The design of next generation electricity systems should be: support more and more applications over time, that is, intensive use; and also extensive use, that is, all electricity services to more and more people. An important point to note regarding Electricity 2.0: Not all services need be from the same provider, as is the case with today’s grid.

My hypothesis is that such full solutions are feasible with today’s renewable technologies. When we add up the monthly or usage fees an operator can charge for these services, the overall system is likely to be economical, not only for the rural un-electrified households of today, but even in urban areas, such as multi-apartment residential housing societies of the kind I grew up in. The doctors called electricity services providers should treat all illnesses.

Open issues remain but are not insurmountable. For instance, should the electricity system be a part of a village microgrid? Should the panels be installed on individual homes, or in a central location? Are people likely to use cookstoves at about the same time, and therefore, create demand peaks and shortages? Can usage be scheduled at staggered intervals to avoid that? Would time-of-use based pricing help demand management? Can we over-design the systems, using batteries and some gas-based generators, so that shortages are manageable?

Having experienced the miracle induction cookstoves represent, in an article on February 27, I argued for microgrids for powering them. I assumed solar power would be converted to AC at 110 V or 220 V using inverters, and thus rendered suitable for induction cooking.

After writing that article, on March 3, I witnessed the use of solar generated DC power fed into a (slightly modified) classic resistance coil cookstove. The water boiled in fifteen minutes at the home of Dr. Barry Butler, in Solana Beach, Calif. This was my first experience of direct solar-powered DC for cooking. Walmart sells a resistive hotplate for $10 compared to induction versions for $65. These could herald the age of solar-powered microgrids for cooking.

Consider the housing society where I grew up — two buildings facing each other with 16 apartments each, four to each floor. There is no space for regular solar panels large enough for anything beyond minimal use, for instance, lighting. But on the terrace on top of each building, there is sufficient space for CPV — Concentrated Photovoltaics — installations. Can CPV-based solar electricity be used for urban cooking, and at a price point lower than the cost of LPG, and traditional grid electricity-based cooking? I think so, but no one has yet done the modeling to prove it.

CPV has practically died as a technology and a product. I have misgivings about it. My disquiet stems from the sense that this should not be. The core idea of concentrating solar power to reduce land use and for more efficient sunlight to power conversion makes sense. But crystalline PV has won the solar deployment battle, mainly because the Chinese manufactured it to such a scale that prices dropped dramatically. Moreover, governments, including India, have political reasons to brag about “GW of solar” deployed. Unfortunately, acres and acres of PV deployment for grid-tied power have crowded out CPV for urban use.

With CPV, there are still close-tolerance moving parts; the technology is not mature and standardized yet. Nevertheless, just as China did with PV, China or someone else could manufacture CPV at scale, reduce costs, and deploy massively. CPV and urban use are perfect complements, and urban cooking, and eventually e-bike or EV charging, can be the “killer” apps. My conclusion: clean cooking, urban and rural, is the next frontier for renewable energy systems.