More
Home Baseload Cities Are Crucial to the Future of Energy 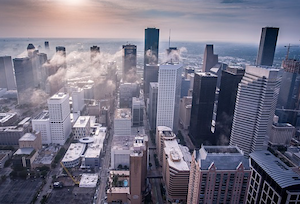 Last month, politicians, energy executives, and energy experts met in Istanbul for the 23rd World Energy Congress. A new report written by Arup for the congress outlines that although cities consume the majority of the world’s energy and house the majority of its people, they have little control over how energy is produced, distributed, or used. Arup’s report discusses five innovations that could give cities better control over their energy futures, ranging from financial mechanisms to new technologies.

Why Are Cities Critical to Energy Supply and Demand?

City leaders talking about energy tend to think along industry lines and focus on transport or the factory or the power station. What they’re not seeing is that the way those energy vectors and behaviours and systems interact in urban areas is a huge part of how you get the changes in energy to happen. These aren’t separate problems to be solved one by one, but problems that need a holistic, community-based solution. That’s where cities come into the frame, Arup’s report suggests.

Arup’s research demonstrates that cities have a unique opportunity to address climate change thanks to being less limited by the complexities of national and international politics. But for many cities across the world, most energy policy is decided at regional, federal, and international levels.

Traditionally, cities have had little power or responsibility over their greenhouse gas emissions from energy systems, creating a siloed approach to energy and carbon emissions, because that’s how the industry was structured, but cities are now stepping up.

For example, many cities are adapting to the concept of transactive energy, which allows for a much more flexible and equitable distribution of production and consumption. Houses with solar panels, for example, can store and push excess energy into the broader marketplace leading to the rise of the pro-sumer. That energy can then be distributed through a centralized market that, unlike today’s dominant systems, doesn’t favor large operators over small ones.

Such systems allow for more efficiency, which is good for the environment with less downtime and unpredictability, which is beneficial for the market. A report by Arup and Siemens found that switching to distributed energy systems, such as renewable energy and energy storage, reduced operational costs by between 8 and 28 percent.

The transactive model could also allow more systems to switch from fossil fuels to grid electricity. Vehicles, for example: a switchover to battery electric vehicles could deliver major air-quality benefits for cities, but existing grid systems would struggle to cope with the addition of thousands of recharging vehicles. A transactive energy grid could keep the system in balance while facilitating the transition to electric vehicle fleets without putting too much peak demand on grid infrastructure.

While technological and infrastructural solutions are important, much of a city’s potential lies in the political and rhetorical realms. Mayors already represent more than 600 million people under the banner of the Global Covenant of Mayors for Climate & Energy. They have also been influential in UN climate talks and have led local campaigns for more green energy — New York City mayor Bill de Blasio, for example, last year announced plans to power 100 percent of the city government’s operations with renewable energy.

Arup sees cities as the hotbed of innovation where a majority of change and action is taking place. The cities can’t meet the commitments that nation-states have made to reducing CO2 and changing the way they produce and distribute energy without putting urban centers at the forefront.

Cities across the world are becoming innovative energy centers in other ways, such as creating new financial tools for funding green energy projects, experimenting with hydrogen fuel cells in homes and public transit. These plans come back to the fact that cities, not nations or regions, are leading their own energy policies.

Arup’s report emphasizes the importance for everyone else — world leaders, politicians, corporations — to understand what’s going on, or risk getting left in the energy past.

Cities will have a different energy infrastructure by the midpoint of this century, and there will be winners and losers in that transformation. So are people doubling down and digging in because they have a vested interest in the current infrastructure, or will they see the writing on the wall?