More
Home Blogs China leads the way: The electrification of the global bus fleet is...

Over the past two years it has become clear that the electrification of the global passenger automotive market is underway. I have been closely monitoring trends throughout the transportation industry during this period, including market activity related to heavy-duty mass transit and yellow school buses, refuse trucks and other urban trucks, material handling vehicles, and various marine applications.

The developments across all of these markets clearly illustrate a fundamental shift to electric drive that is primarily the result of a need to decrease emissions in densely populated urban environments. Over the past decade, prices for lithium battery packs and complete energy storage systems have significantly decreased, providing a gateway for the transition to electric drive.

As global populations continue to flock to metropolitan centers, it is clear that urban planners must now focus on core challenges, including the integration of sustainable energy and clean transportation technologies into dense urban environments. This is a critical move, as the reduction of ground-level emissions is one of the greatest challenges of our time. The end goal is to reduce the amount of pollution that is generated from cities; it is simply not possible to continue to build mega-cities without planning a sustainable development roadmap.

This issue becomes significantly amplified in a society that is becoming more energy hungry and more demanding of resources. Unless municipalities and governments, businesses and individuals alike adjust their behavior today, it will become more challenging over time to implement necessary changes.

Various trends indicate that changes are forthcoming over the next years. Over the course of the next century, we will spend more money on building and rebuilding cities than we have spent over the entire span of human history up to the present day. A tidal wave of investment into cities will allow an opportunity to implement new technologies and processes to become smarter and more sustainable.

China has led the world in the mass transit market, transitioning to a total deployed fleet of 421,000 electric buses. This number compares to the USA at 300 units; Europe at 2,250 units; and the rest of the world at less than 1,500 units in total. According to Bloomberg New Energy Finance, it is expected that by 2025 China will grow its heavy-duty electric mass transit market to around 600,000 units, while USA will grow to 5,000 units. 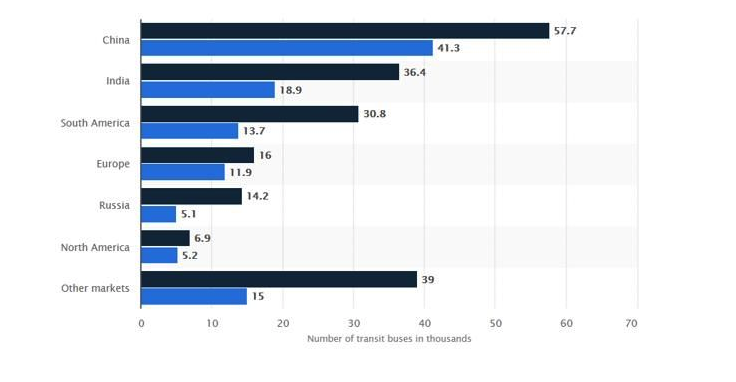 The Chinese government has backed the conversion of bus fleets to electric drive as part of a broader program to dominate the global lithium battery supply chain. It is in my opinion that the Chinese are hyper-bullish and playing the long game with their investment into the lithium battery supply chain. Over the past few years, the Chinese have made significant acquisitions and investments to secure long-term supply of various energy metals, including (but not restricted to) lithium, cobalt and nickel. They also successfully ramped up their annual production capacity of lithium battery materials to final battery-pack production and final product integration, as in the case of electric vehicles.

Today, emerging Chinese clean energy and transportation technology companies, such as CATL and BYD, are incredibly well-positioned to play in the electric vehicle industry. Over the past two years, CATL has made investments directly into lithium production and nickel exploration sites. At the same time, CATL has successfully completed an IPO to attract much needed growth-capital. It has also secured long-term contracts to supply batteries and materials to major global automotive companies such as Volkswagen Group.

BYD is another vertically-integrated clean energy and transportation company that has leveraged its success in the Chinese domestic electric bus market in order to shift to the global markets. Today, the company has secured electric bus supply contracts in many countries, including Spain, Chile, Sweden, Norway, Denmark, USA, France and Ecuador. In February 2019, BYD announced it had reached a production milestone of 50,000 electric buses. The company has recently expanded its global production capacity to include facilities in California and France.

A recent flurry of sales contracts and commitments from global mass transit authorities has prompted other bus manufacturers to launch electric buses as well, including Hyundai, Daimler, Tata, Volgren, New Flyer, Irazir, and Gillig. The California firm Proterra, which is entirely focused on electric buses, has done exceptionally well, winning supply contracts across North America. In September 2018, Proterra closed on a $155 million investment from Daimler and others.

The shift to electric drive that is well underway in the mass transit market will soon be obvious on campuses, at airports, and in other locations suitable for private fleets. Despite China’s aggressive moves to dominate the global movement to electric buses, the amount of opportunity available remains overwhelming. First, the number of electric buses in China will continue to rise as the nation continues to expand its fleet over the next years. Second, no other region in the world has a deployed fleet of significant size. As noted above, of the 160,000 buses in Europe only a few thousand are electric, and only 300 buses of 69,000 currently operating in America are electric.

As global populations continue to flock to dense urban city centers, governments will need to focus on building sustainable and inclusive communities, which will encourage investments into clean energy transportation systems including electric buses. It is in my opinion that all urban motors will eventually be converted over to electric drive so buses only represent one component of the coming shift in transportation and urban planning.

The rest of the world, beyond China, represents the largest opportunity for the lithium battery supply chain although an expanding Chinese fleet will also play a center role in the years ahead. Summarily, the electric bus market has reached a tipping point led by full fleet transition in China, with a very encouraging list of pilot projects by nearly all major North American and European transit authorities.

Consider that numerous cities around the world have already announced commitments to phase out the availability of petro-based cars over the next two decades while global transit authorities have committed to shift to electric buses. Tallinn has plans to purchase 650 electric buses by 2035 while Paris will take 800 by 2024. More broadly, Mayors of London, Paris, Los Angeles, Copenhagen, Barcelona, Quito, Vancouver, Mexico City, Milan, Seattle, Auckland and Cape Town all signed the C40 Fossil-Fuel-Free Streets Declaration that commitments these cities to only purchase fully electric buses by 2025.

It is in my opinion that an increasing number of transit authorities in Europe and North America will continue to announce pilot projects in 2019 with a spillover effect to other regions including India and Latin America. Major North American transit authorities, including Toronto, New York and Los Angeles have already outlined plans to achieve a zero-emission fleet between the years 2030-2040. Further, I believe that the future of electric buses is only a question of when not if. I anticipate that sales will continue to grow given the current political support for them in combination with the declining cost of batteries and electric motors.

Of course, the electrification of global mass transit fleets is an important milestone to reducing ground level emissions in dense urban environments but it also represents a sizable opportunity for the lithium supply chain. Consider that by 2022 there will be more than 1.6 million mass transit buses on the road with easily more than 1.1 million that can be switched to electric drive over the next years as fleets retire and new buses are acquired. This would command some 500 GWh of lithium battery systems and over 400,000 T of Lithium Carbonate Equivalent.