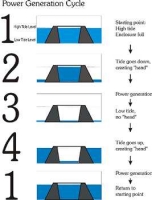 London, United Kingdom [RenewableEnergyAccess.com] Thanks to China’s insatiable appetite for energy and their increasing determination to add renewable energy to the mix, the ocean waters off the coast of China are on their way to gaining a large-scale ocean energy project.

The Chinese government signed an agreement with UK-based Tidal Electric for a renewable energy tidal power project near the mouth of the Yalu river. At 300 MW, the project would be the largest tidal power project in the world, according to the developers, topping the capacity of the 240 MW French tidal power plant in LaRance. Tidal Electric’s offshore tidal power generation, also called “tidal lagoons,” is a new approach to tidal power conversion which the company says resolves the environmental and economic problems of the familiar “tidal barrage” technology. Although it has been in use for more than 1000 years, Tidal Electric says the tidal barrage is unsuitable for broad-scale commercial use because of environmental and economic drawbacks due, primarily, to its shoreline location. Instead, Tidal Electric’s tidal lagoons use a rubble mound impoundment structure and low-head hydroelectric generating equipment situated a mile or more offshore in a high tidal range area. Shallow tidal flats provide the most economical sites. Multi-cell impoundment structures provide higher load factors (about 62 percent) and have the flexibility to shape the output curve in order to dispatch power in response to demand price signals. The tides are highly predictable and permit tidal power to fit comfortably into existing electricity distribution grids. Tidal Electric also wrote a computer simulation program that uses equipment performance characteristics and tidal data to create a detailed simulation of generation output, water flows and storage, and is used for design optimization. Governor Zhang Wenyue of Liaoning Province (population 50.2 million) traveled to New York City for the signing ceremony accompanied by four Mayors from cities nearby the chosen site, provincial consenting authorities, foreign trade officials, and a contingent of foreign affairs specialists. Tidal Electric was represented by Chairman Peter Ullman, Director Gregory Bonenberger, and Michael Ashburn, a British citizen living in Beijing who heads up Tidal Electric’s affiliate company Tai Yang Dian Li (“Clear World”). Detailed discussion of specific aspects of the agreement were held at the Yale Club in New York and included Mayor Chen of Dandong City and a contingent of other local officials who pledged their support and agreed to provide Tidal Electric with environmental data, tidal data, and liaison services. “China’s economy is booming and requires many new power resources to keep its momentum going,” Ullman said. “The Chinese government has clearly stated their support for renewable power. They demonstrated that by bringing top scientists and engineers together to carefully consider the tidal lagoon technology and ask all the hard questions. They are now satisfied the technology is credible.” Next steps for the project are to conduct engineering feasibility studies similar to those that were recently successfully concluded in the UK by WS Atkins Engineering for Tidal Electric’s Swansea Bay project.