More
Home Solar CEO of German Utility RWE Says It Should Have Invested in Renewable... 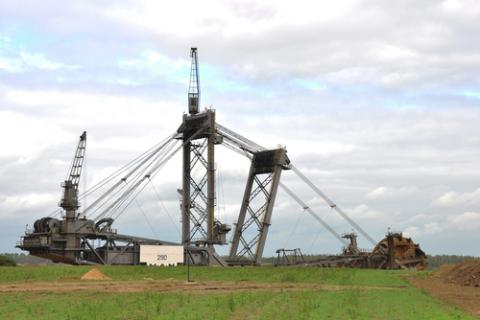 BERLIN — What’s a beleaguered utility to do when forced by the government to close its profitable nuclear power plants?

It turns to lignite, a cheap, soft, muddy-brown colored form of sedimentary rock that spews more greenhouse gases than any other fossil fuel.

The story of German power giant RWE AG exemplifies the crisis facing the nation’s utility industry — and those of many countries across Europe — as nuclear power plants get shuttered in the wake of the Fukushima disaster, renewables steal away revenue, and consumers and companies complain about rising power costs that are three times higher than in the U.S.

Chancellor Angela Merkel’s decision in 2011 to shutter all 17 of Germany’s nuclear power stations by 2022 struck a blow to RWE’s profit stream, particularly for a company that has almost no presence in renewables. RWE posted its first loss last year since World War II and may face worse losses going forward.

The Essen-based company, founded in 1898 to produce power for Germany’s industrial heartland, has had no choice except to ramp up production from its profitable coal-fired plants, most of which burn lignite.

The result: RWE now generates 52 percent of its power in Germany from lignite, up from 45 percent in 2011. And RWE isn’t alone. Utilities all over Germany have ramped up coal use as the nation has watched the mix of coal-generated electricity rise to 45 percent last year, the highest level since 2007.

Peter Terium, chief executive officer of the utility’s executive board, “has one of the most difficult tasks in RWE’s history,” said Ernst Gerlach, director of Verband der kommunalen RWE-Aktionaere GmbH, a municipal investor association that represents 23 percent of RWE’s shareholders. Terium will address investors at the company’s annual general meeting this week.

RWE’s plight frames a larger story of how coal — thought to be doomed as the continent attempts a shift toward a fossil-fuel free future — is rising in Germany and across Europe as countries seek to re-balance their green ambitions with economic reality.

Many of Europe’s largest utilities are caught between a weak economy that undermines power demand and policies that favor wind and solar energy over traditional power plants. Usually a safe haven for investors in troubled economic times, Europe’s utility stocks have fallen 12 percent over the past five years, as the wider stock market has gained 60 percent.

“The energy shift threatens to become a lignite shift,” said Oliver Krischer, a senior Green Party member of parliament. Utilities should invest in renewable energy rather than pursuing an “obsolete business model.”

Annett Urbaczka, an RWE spokeswoman, said the turn to lignite had been forced on the company because it’s the only fuel that can compete given the preference awarded to renewables under Germany’s market rules.

However, many are convinced that there are too many forces pushing against coal for its comeback to last. Europe can’t afford to keep coal-fired plants going and meet stringent targets to reduce carbon-dioxide emissions.

Germany’s environment minister has proposed reducing the number of carbon emission permits in Europe to increase the cost of burning coal. Last month, the government in RWE’s home state of North Rhine-Westphalia moved to limit digging at a lignite mine owned by the company.

“RWE can’t rely on conditions for lignite not to deteriorate politically,” Michael Vassiliadis, president of IG BCE, a union that represents thousands of RWE workers, said in an interview. “Almost all activities come with political risks attached.”

RWE’s largest competitor, EON SE, has fared somewhat better. It runs a large international business producing power in emerging markets, including Turkey and Brazil, that’s provided some protection from the German power market, where electricity prices hit a record low this month. Even so, the Dusseldorf-based company increased coal generation in Germany last year as it cut profit forecasts.

“Due to the higher dependence from electricity generation in Germany, RWE is more vulnerable than EON,” said Thomas Deser, a portfolio manager at Union Investment, who is responsible for the fund’s stake in RWE.

Terium’s room for maneuvering “is currently very limited,” he said in an interview in Frankfurt. “It’s a matter of reducing costs, disinvesting. That’s a rearguard action aimed to ensure the financial viability.”

Late To Invest in Renewables

One of RWE’s chief handicaps has been its lack of clout of in the renewable energy market where subsidies and preferential access to the grid have increased the market share in Germany to a record 24 percent last year. “We were late entering into the renewables market — possibly too late,” Terium told reporters at his annual press conference last month, saying the company had “made mistakes.”

Last year, RWE generated 6.4 percent of its power from alternative energy sources, compared with almost double that at EON.

Still, RWE has no plans to back away from lignite. The company is pressing ahead with plans to build a 1,100-megawatt plant at Niederaussem, near Germany’s border with Belgium. Planned to start operation in 2018, if it gets the final go-ahead it will cost cash-strapped RWE 1.5 billion euros ($2.1 billion) to build.

It’s not a strategy that convinces RWE’s work force, which has shrunk by 30,000 since 1998, said Hans Peter Lafos, a trade union representative and RWE supervisory board member. He blames both management and politician’s for the company’s predicament.

“The staff’s hope that anything turns around for the better has gone,” he said.

Lead image: Dredger in German Coal Mine via Shutterstock