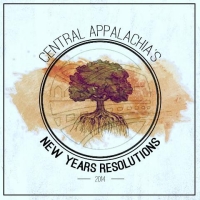 A newly emerging network called the Central Appalachian Sustainable Economies (CASE network) has launched an interesting social media campaign focused on New Year’s Resolutions for 2014. Yet, what these resolutions won’t tell you are what stereotypes and renewable energy development have in common.

A region that has failed almost every experiment in economic development may just succeed in the modern age of sustainability. If successful, it will largely be due to a profoundly simple equation:

Yes, it’s really this simple…or is it?

What can be considered the first occurrence of the hillbilly stereotype, the now infamous Hatfield-McCoy Feud has come to define the manner in which most American’s think about central Appalachia today. For example, according to Appalachian scholar Susan Sarnoff, “It was not until the end of the 19th century, when lumber and coal companies sought to exploit Appalachia’s natural resources… that the ‘ignorant hillbilly’ took shape.”

Today this rigid icon is alive and well if one simply accounts for the popularity of the History Channel’s “Hatfields & McCoys” series as well as its more disconnected manifestations with the “Hatfields & McCoys: White Lightning.” The problem is that with most if not all of these portrayals, they never seem to get it right… They never seem to paint a complete picture of a region that has suffered the brunt of these stereotypes that, according to Appalachian historian Henry Shapiro, formed “the background of our public values” as Americans. Can the same thing be said about modern conceptions of coal communities? And if so, this brings us to the first part of our development equation:

Appalachian historian Anthony Harkins found that by the turn of the twentieth century, the idea of mountaineers as being a race of violent savages who threatened the nation’s progress had become “firmly entrenched in the American psyche.” Perhaps a similar trend is true today with modern environmentalism’s helpless or “endangered” hillbilly fighting the good fight at what some aptly refer to as “ground zero” of the climate change movement. Moreover, similar trends are emerging where America’s ideal of “sustainability” takes the form of renewable energy development and what is believed to be “threatening” its progress are evil coal companies and the communities who rely on this industry for their livelihood.

Fueled by images of barefoot and toothless, slothful hillbillies these myths reinforce American ideals of progress that historically sought to promote Lyndon Johnson’s War on Poverty and continue forward into our modern era with contrived reality shows and movies, like the “Wild and Wonderful Whites of West Virginia.” These disconnected realities and many more like them carry on the mythical stereotype of the American other. Given this situation, maybe traditional approaches to social change will not suffice given that you can’t protest a stereotype that is enfused within the very fibers of America’s identity. Thus we have the second factor in our equation:

From this long legacy of stereotypes has emerged a sort of “Innovation Feud”, spreading throughout the coalfields of central Appalachia – one signified by what some are calling Applied Sustainability. Beginning with Sustainable Williamson and Sustainable Pike County’s 2013 “Healthy Feud” that had well over one thousand participants, a new kind of feud is emerging. This pro-active approach is simple:

Flying under the banner of integrated energy, several central Appalachian counties are developing Integrated Energy Parks that will host an assortment of both renewable and non-renewable energy resources. One of the most exciting is the potential role hemp will play during this region’s transition. In a whitepaper entitled “Hemp: An Energy Crop to Transform Kentucky and West Virginia,” the local innovators clearly define the validity of their pursuits. The white paper states:

“Biomass crops have been prioritized by the United States Departments of Energy (DOE) and Agriculture (USDA) for development across the nation due to their great potential for increasing the share of domestic renewable energy… A multitude of recent publications in science and engineering journals have reported the successful conversion of hemp to transportation fuels, chemicals, biodegradable polymers, and a broad range of advanced materials. Exciting new developments include the use of exfoliated hemp to produce high capacitance graphene nanosheets for use in large-scale production of energy storage devices.”

The hemp whitepaper released by the Kentucky and West Virginia Hemp Growers Cooperative Associations, along with research collaboration with Kentucky-based Patriot Bioenergy Corporation, points to the validity of hemp as a feedstock for energy and chemical applications.  The whitepaper presents the scholarly evidence showing investment in Applied Sustainability (i.e., sustainability science) is needed to begin the deployment of hemp-based projects. The broad applicability of hemp serves as both an economic diversifier in rural central Appalachia and as a biomass feedstock that will unleash energy and chemical development akin to the technological revolutions of the 1970s, 80s, and 90s in Silicon Valley. This of course is an extremely important step to complete the equation and…

But wait a minute!? A biomass (r)evolution spurred by so called endangered hillbillies who are talking about “graphene nanosheets” seems to go against the grain of what some seek to characterize as helpless coal communities or victims of exploitation. Could there be contemporary stereotypes lingering within the modern ideal of sustainability? Only time will tell but until then let’s see who the contenders are in this Innovation Feud.

On the Hatfield side we have the West Virginia Hemp Growers Cooperative Association:

Steve Kominar, executive director of Mingo County Redevelopment Authority, stated that this “healthy competition is important because it seeks to develop the bedrock of economic development built from our region’s strengths, entrepreneurship in the energy sector.” Kominar and his team are developing several innovative approaches to integrated energy which will include a pilot site for growing hemp on mine scared lands over 2014. MCRA board member Terry Sammons expressed his overwhelming support of this pilot project:

“Our region can continue in the future to be a dominant force in the energy sector by embracing all forms of energy. Sustainable energy must play a key role in the integrated energy mix, and I believe our region has the visionary leadership to accomplish this objective. By doing so, not only will we develop a sustainable economy, but also enhance the ability of our citizens to live here and work here.”

On the McCoy side we have the Kentucky Hemp Growers Cooperative Association:

Echoing the spirit of being proactive, the president of KHGCA, David Hadland, suggested that “both sides meet on the Paul Dillon Bridge” linking the two states (Pike and Mingo county). Here, Hadland continued, competitors “can take the first steps toward transcending the reactive stereotypes that have devastated the region for more than a century. The feud’s energy will be redirected toward creating a sustainable economy beginning in the heart of Hatfield and McCoy country.”

Jessie Salyer, a coal operator through-and-through is also jumping on the Renewable Energy band wagon. Salyer said that “local business development is what makes sense to me and if it comes from renewable energy, all the better. Coal and renewable energy are not mutually exclusive.”

The overall intent of the Innovation Feud is to unleash the entrepreneurial potential in the region that not only develops renewable and alternative energy, but grafts these emerging industries into the bedrock industry of the region—fossil fuels.  As innovators and early adopters, the goal is to fully develop the potential of biomass in central Appalachia, which includes the full use of post-mining land that has been reclaimed and is sorely underutilized.  It includes incorporating educational and vocational skills training from secondary and post-secondary education, and supplying a displaced coal-mining workforce with job retraining that provides them opportunities in a new and more diversified local economy.

As it stands right now, it is too early to tell how the transition will go but a few things are certain regarding the required ingredients. Among all these is one of the most important: American’s must begin to think about Appalachia in a completely different manner. In this spirit we leave you with a quote from Ronald Eller’s book, Uneven Ground (this link is a must read):

“For more than a century, Appalachia has provided a challenge to modern conceptions of the American dream. It has appeared as a place of cultural backwardness in a nation of progressive values, a region of poverty in an affluent society, and a rural landscape in an increasingly urban nation.”

“We know Appalachia exists because we need it to exist in order to define what we are not. It is the ‘other America’ because the very idea of Appalachia convinces us of the righteousness of our lives. The notion of Appalachia as a separate place, a region set off from mainstream culture and history, has allowed us to distance ourselves from the uncomfortable dilemmas that the story of Appalachia raises about our own lives and about the larger society.”