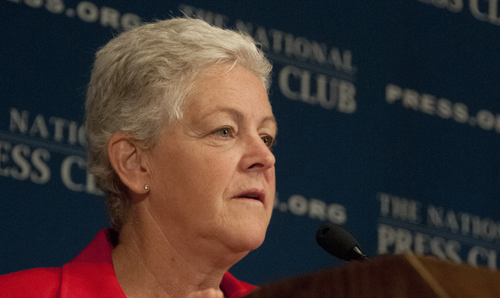 President Obama’s Clean Power Plan would survive even if a Republican president is elected in 2016, EPA Administrator Gina McCarthy said.

“There is a history of us moving forward under the Clean Air Act, and we are not seeing our large initiatives go down because a Republican has gone into the presidency, or because Congress has decided to to take it up,” McCarthy said today at the “Election 2016 and The Future of Energy” discussion with Bloomberg Politics.

Despite efforts in Congress to block the rules and criticisms of the EPA by Republicans on the campaign trail, McCarthy said “there is a record and there are courts to protect that and it is going to be the same with the Clean Power Plan.”

McCarthy’s comments came one day after the Senate voted to pass two resolutions aimed at blocking the Obama administration rules that would cut heat-trapping carbon dioxide emissions from power plants. Those rules could mandate cuts of 32 percent in the carbon dioxide emitted from power plants by 2030. McCarthy said she will “pay attention” to the resolutions, which demonstrate “we have to continue to do a better job explaining” the value of the measures to opponents on Capitol Hill.

Obama has threatened to veto the legislation. House Energy and Commerce Committee is taking up similar legislation today.