South Africa’s need to speed up grid electrification has surpassed and suppressed the process to pursue grid independence with renewable energy. Statistics suggest that 6 percent of South African electricity is consumed by agriculture, however many related industries are not considered, such as processing plants, cold room facilities, packaging, canning and abattoirs. These industries likely double consumption, if not more.

Agriculturally related industries are major energy consumers with large quantities of digestible waste, and many have direct associations with waste producers, which are also large energy consumers. These small and medium enterprises (SME) could very easily, and at low cost, become self-sustainable, off-the-grid solutions with biogas digestion systems.

The real problem is that food and agricultural producers only look at renewable energy projects as “income generating” projects, but should instead view them as a way to reduce or even eliminate energy expenses.

The South African parastatal utility Eskom, and the only licensed buyer and distributor of energy, must purchase at least 1 MW of capacity from any Independent Power Producer (IPP). This mandate has crushed any interest to produce energy below 1 MW of capacity. For example, a farm with 7,000 pigs downgraded their biogas installation from 260 kW to a mere 40 kW because there was no reason to run the bigger system — its surplus methane is simply flared.

In an attempt to attract the <1-MW SMEs, the State offered a rebate system for renewable energy projects, but then put the incentive on hold in 2013 citing financial constraints.

Consequently, biogas potential is not generating interest. There is only a handful of agriculturally orientated operations that have more than 1 MW of capacity potential at any one site, such as cattle feedlots and few large dairies, but since most could never reach 1 MW of capacity, they do not produce anything at all.

This table shows the awarded Renewable Energy Independent Power Producers Procurement Program (REIPPPP) from 2011 to 2014. Note that zero biogas projects were approved. Clearly it seems as though biogas is not welcome.

An estimated 640 medium to large poultry farmers baulk at converting the millions of tons of poultry dung to energy. However the Gut Mennewitz Poultry Farm in Koethen Germany has 2.1 MW of biogas capacity and the Minhe Poultry Farm in China has 3.8 MW. These are highly intensive and technical installs, and the benefits are deeper than pure methane production — they also contribute to improved waste management.

Gut Mennewitz’s system mixes 70 percent poultry dung with silage and landscaping cuttings. This technology is almost impossible to use in South Africa, since it traditionally re-incorporates the silage into the lands for the next crop. This practice takes years to change, regardless of studies that show as much as 37 percent of the nitrogen gas in the silage will be lost. 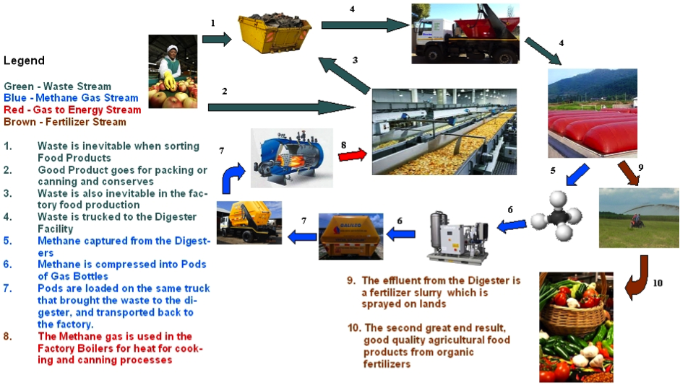 We believe the answer lies in leading by example, and the only example that really matters is when the example really makes a good profit.  Therefore, we are beginning to install our own renewable energy systems on strategic sites, collect the wastes, digest them and sell back the methane to the farmers and business, while keeping the fertilizer effluent for our own profit. Because we need to cover the start-up costs to do this, we have started a crowdfunding campaign that you can see at this link.

Our belief is that once businesses see that the process is viable, they will buy in and hopefully buy out the installation, for their own gain.  Then, between the profits earned from selling the fertilizer as well as income from possible buyouts of our “lead by example” sites, we will be in the position to replicate this model again and again. Through our efforts perhaps at some point, renewable energy  will become more important and will subsequently spread to the rural communities as well as the informal settlements, where sanitation is nonexistent.

There is no question that biogas digesters can improve the quality of life in Southern Africa, reduce greenhouse gas emission and be a small but positive step towards making us a greener country.