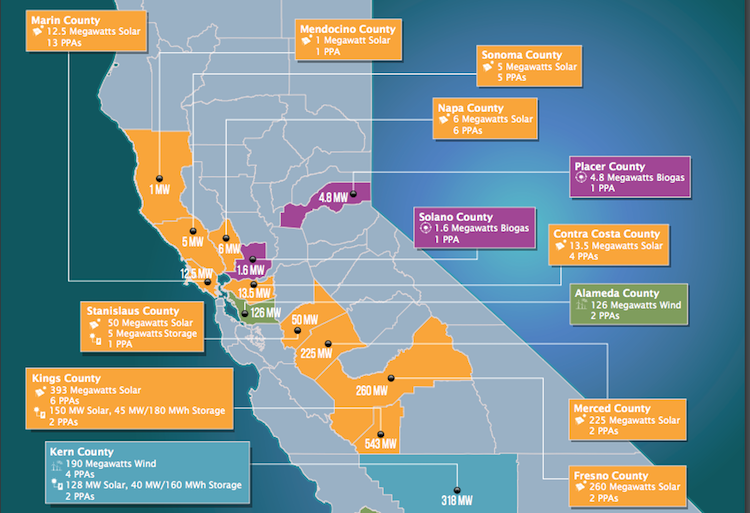 CCAs achieved the 2,000 MW milestone in October when Monterey Bay Community Power  and Silicon Valley Clean Energy  approved power purchase agreements (PPAs) totaling 278 MW of solar coupled with 340 MWh of battery storage for two separate projects, to be built in Kern and Kings Counties. In 2017, CCAs in California had secured approximately 1,000 MW of new renewables under long-term contracts, so the figure has doubled in one year.

California’s aggregators have signed a total of 59 PPAs with new solar, wind, biogas, and energy storage facilities, supporting billions of dollars in construction and thousands of jobs. All but three of the contracts are for terms of ten years or longer.

The renewable energy projects are located in 16 California counties – from Mendocino County in the north to Riverside County in the south, with one located in New Mexico. Several projects are already operating, while others will become operational between 2019 and 2021. The map above shows a portion of the projects – see the full map at this link.

The table below also shows a sampling of projects:

Marin Clean Energy (MCE) initiated service in 2010 becoming the first operational CCA in California. There are now 19 CCAs serving approximately 8 million customers in the state and momentum is building. Ten CCAs launched in 2018 alone and many more are under development.

Despite their newness, CCAs are viewed as reliable and stable counterparties and are proving adept at securing cost-effective, long-term power resources. As a result, CCAs are able to serve their customers with electricity that is cost-competitive, and in many cases greener, with the supplies of investor-owned utilities.

“A key aspect of the value proposition offered by MCE and other California CCAs is the requirement that renewable and clean energy be a major component of the customers’ power supply mix,” Moody’s Investor Services said upon assigning MCE an investment grade credit rating in May. “This value is one of the most significant factors that provides strength to the long-term business model.”