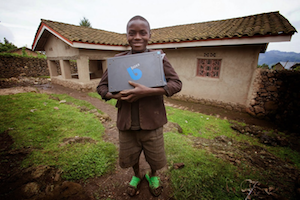 A British company aims to provide pay-as-you-go solar power to millions of people in the Democratic Republic of Congo, the vast central African nation where less than a fifth of the population have access to electricity.

BBOXX plans to provide basic kits to customers comprising panels, a radio, a battery and several appliances, as well as larger systems to power households and small offices in urban and semi-urban areas. Prices will start at $15 per month with customers paying by mobile-money platforms, Hamayun said by phone.

“We think that by the end of 2020 we can reach 2.5 million people” with between 300,000 and 400,000 installed systems, he said, comparing it favorably to the current options, where Congolese people spend much of their income “on things like kerosene, candles and diesel for generators” for what is “often a very poor quality of supply.”

Congo has one of the lowest electrification rates in the world, with 17 percent having access to the electricity grid, according to World Bank data from 2016. In rural areas, the figure is less than 1 percent.

Through an existing partnership, BBOXX has already electrified 3,000 households in the country’s east and is initially targeting customers in the capital, Kinshasa, as well as the cities of Goma and Bukavu.

The venture-capital backed company is also active in Rwanda, Kenya and Togo, where it has distributed more than 150,000 systems, according to its website. BBOXX finances the installation of each system, which is remotely monitored and controlled. In Congo, BBOXX has partnered with the local subsidiary of Paris-based Orange SA.