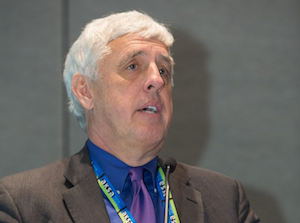 It was a funny statement, and the room laughed. But underlying such a statement is a real truth. The power generation industry is changing, and with that evolution comes a host of new technologies—some of them disruptive—that must be integrated into the existing landscape.

While the session orbited around the topic of energy storage, it also addressed multiple ancillary technologies and industries which inform energy storage’s place in the industry.

Bradshaw began the morning with a broad survey of available energy storage technologies, describing technical specifications (cycle capacities, required capital investment per kilowatt-hour, and depth of discharge capabilities) of multiple energy storage technologies from conventional lithium-ion batteries and EOS’s Znyth hybrid cathode batteries, to compressed air energy storage and underground pumped hydroelectric storage. Renewable energy will “tear up” existing fleets without fast-response power generation, Bradshaw said, adding that because energy storage can respond in seconds, it will be instrumental in maintaining existing fossil fleets. He went on to say that the energy storage industry was becoming overcrowded, because the market hasn’t “shaken out” yet, seeming to imply that competition in the field will consolidate the industry, creating winners and losers in the process.

For his part, Schulte discussed the relative merits of multiple energy storage projects across the industry—among them CAES and pumped storage projects—as well as their performance in the field and marketplace. Grid-level energy storage increases integration of renewables, he noted, while also reducing the cycling of fossil plants. He added that energy storage also reduces constraints on transmission and delivery infrastructure across the industry. Grid-level storage proves more difficult to monetize in RTOs and ISOs, he said, and there is need for new markets and tariffs to improve this situation.  As things now stand, he explained, there is the potential for “free riders” who benefit from energy storage while bearing no obligation to pay for it. Energy storage needs to have its own regulatory category, he continued, one that recognizes energy storage can serve multiple roles in the industry. “Traditional regulation is trying to drive a round peg into a square hole,” he concluded, and energy storage installations are not being properly compensated.

Harmonizing with Schulte, Romano noted that power generation is changing, adding that energy storage “is the crux” of this evolution. Storage costs have dropped by up to 60 percent in the last two years, she said. Concluding her presentation, she discussed the fundamental role that energy storage plays in virtual power plants.

While not addressing energy storage directly, Higgins spoke about the Loan Guarantee Program of the U.S. Department of Energy, which impacts renewable power generation and, by extension, the development of energy storage. Energy storage qualifies for funding under both renewable and fossil energy loan programs, he said. The loan program office is a high-risk organization, he added. The Title XVII loan guarantee program bridges a financial gap in the power industry, providing funding for first-of-their-kind energy technologies which are too new in the industry to have histories of loan payback, and so are neglected by commercial lending institutions. Citing the historical case of utility-scale photovoltaic (PV) solar projects, he noted that in 2010 the loan program underwrote loans for five such projects, when other lenders would not. In 2016, he said, there are now 45 privately-financed PV projects. Amazingly, he added, the program has experienced only a 2 percent loss. Higgins concluded by enumerating the four eligibility requirements that projects must meet to qualify for loans from the program. They must utilize new or significantly improved technologies that have not been deployed in the United States more than three times in the last five years. Projects must also avoid, reduce, or sequester greenhouse gases. Finally, he said, they must be located in the United States and have a reasonable prospect of repayment.