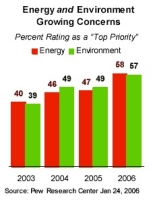 Washington DC [RenewableEnergyAccess.com] With high fuel prices and instability in the Middle East, Americans are increasingly concerned about the nation’s energy situation. In January, 58% rated “dealing with the nation’s energy problem” a top priority, up from just 47% a year ago and 40% in January of 2003, according to new research and poll analysis from the non-partisan Pew Research Center.

And while finding new energy and protecting the environment are often seen as conflicting goals, the public makes no such distinction. In concert with rising energy worries, Americans are becoming increasingly anxious about the environment. In January, 57% rated “protecting the environment” a top priority, up from 49% a year ago and just 39% in 2003. The outgrowth of this concern about both energy and the environment is that the public expresses almost universal support for solutions that address both problems at the same time. Fully 86% favor the government requiring better fuel efficiency standards for cars, trucks and SUVs, and 82% favor increased federal funding for research on wind, solar and hydrogen energy. Even more striking in today’s politicized environment, is the level of bipartisan consensus behind these proposals. Republicans back higher fuel efficiency standards as uniformly as Democrats, and, if anything, are even stronger backers of federal research programs on alternative energy sources. Even expanding government spending on mass transportation, supported by two-in-three Americans overall, is backed equally by both Democrats and Republicans. But other proposals are far more divisive — both across party lines and within each party itself. There is growing opposition to the idea of giving tax cuts to energy companies to support oil exploration, at least partly in reaction to record profits posted by major oil companies. Also, just 44% of Americans support the idea of promoting nuclear power to address the country’s energy needs, while 49% are opposed. Most Democrats oppose these proposals and most Republicans favor them, but the parties themselves are hardly unified. For example, while roughly four-in-ten Democrats favor promoting nuclear power, an equal number of Republicans oppose the idea. Similarly, while 57% of Democrats oppose allowing oil drilling in the Arctic National Wildlife Refuge, a third supports the proposal — hardly a unified party position. These internal conflicts within both parties over the specifics of environmental protection and energy development pose a potential roadblock to consensus on policy alternatives. The extent to which constituencies within each party differ starkly over environmental priorities was highlighted by the Pew Research Center’s 2005 Political Typology. That survey, which classified segments of the U.S. electorate in terms of their underlying values, found that Americans take an overwhelmingly pro-environmental position on one of the survey’s core questions. More than three-quarters of the public (77%) say that the country should do whatever it takes to protect the environment. Just 18% take the opposing position, that the country has gone too far in its efforts to protect the environment. But a critical subgroup within the Republican coalition disagrees with this overall assessment. Enterprisers — Republicans who take a strong pro-business and small-government position on most issues — are of the view that the country has already gone too far on the environment. Social Conservatives and Pro-Government Conservatives, on the other hand, are as firmly behind environmental protection as most Democratic and centrist groups. And when the potential impact of environmental regulations on jobs and the economy are raised, significant divisions within the Democratic base also emerge. Many of those who are financially struggling and skeptical of both government and business — a group we refer to as Disadvantaged Democrats — say that environmental regulations cost too many jobs and hurt the economy. Other Democrats are far more likely to believe that environmental regulations are worth these costs. On the right, Enterprisers continue to diverge from the views of other GOP groups in their criticism of environmental efforts. Concrete actions that both protect the environment and address the nation’s energy needs are unlikely as long as these issues divide the parties internally at least as much as they divide Republicans from Democrats. While there is broad public backing for such government actions, advancing these policies may require an unusual coalition that energizes segments of both parties’ bases. The Pew Research Center is a nonpartisan “fact tank” that provides information on the issues, attitudes, and trends shaping America and the world. It does so by conducting public opinion polling and social science research; by reporting news and analyzing news coverage; and by holding forums and briefings. It does not take positions on policy issues. Information courtesy of the Pew Research Center for the People & the Press