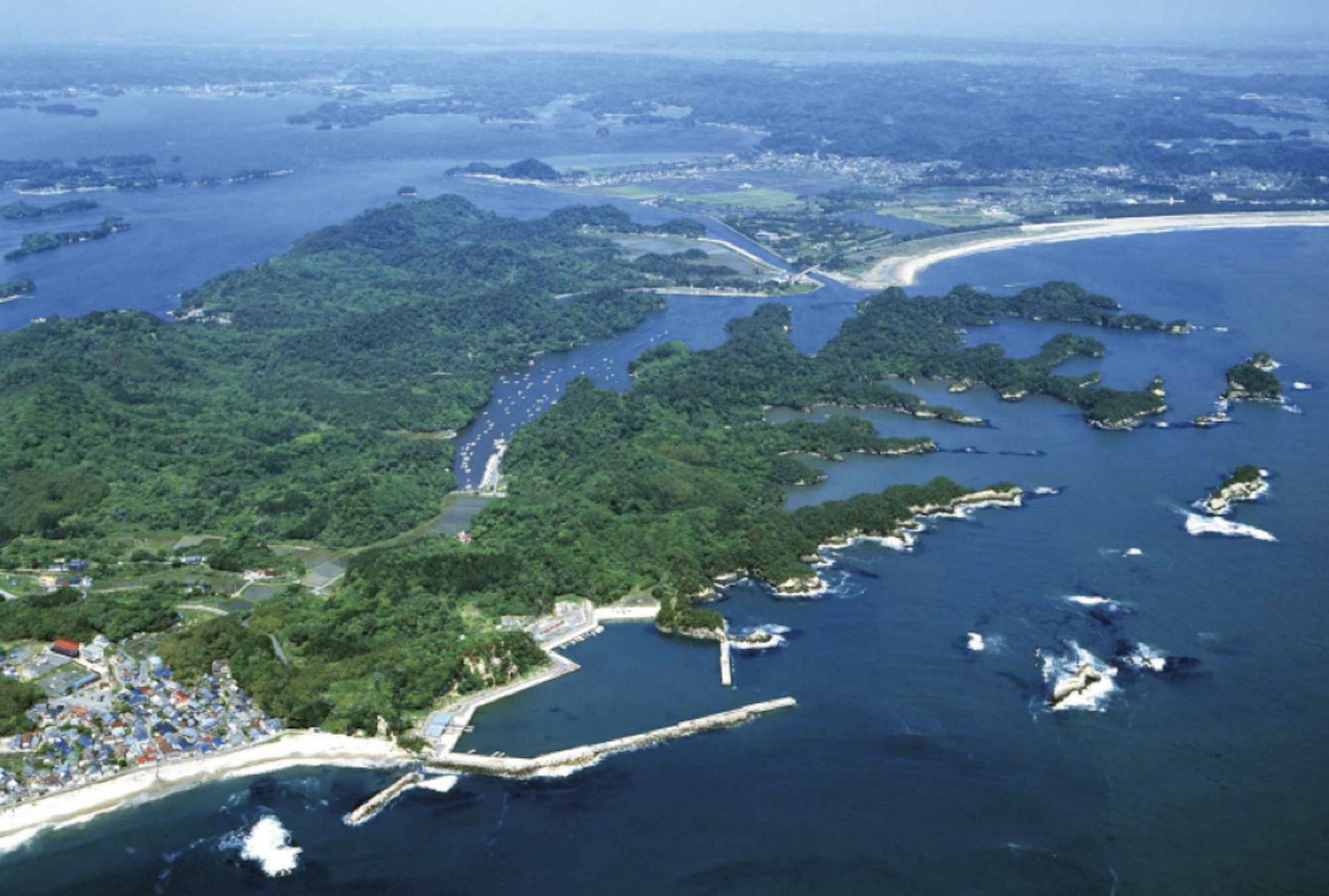 Although Japan’s Fukushima prefecture is most commonly associated with the 2011 disaster due to the nuclear power melt-down, Miyazaki prefecture, located north of Fukushima, suffered the largest death toll, close to 10,000, and the largest flood damage in the nation.

Located on the coast, Higashimatsushima city was no exception. It had a catastrophic tsunami-caused flood, which put 65 percent of the city under water, with over 1,100 lives lost. Approximately 10,000 residents lost their homes and were forced to evacuate. 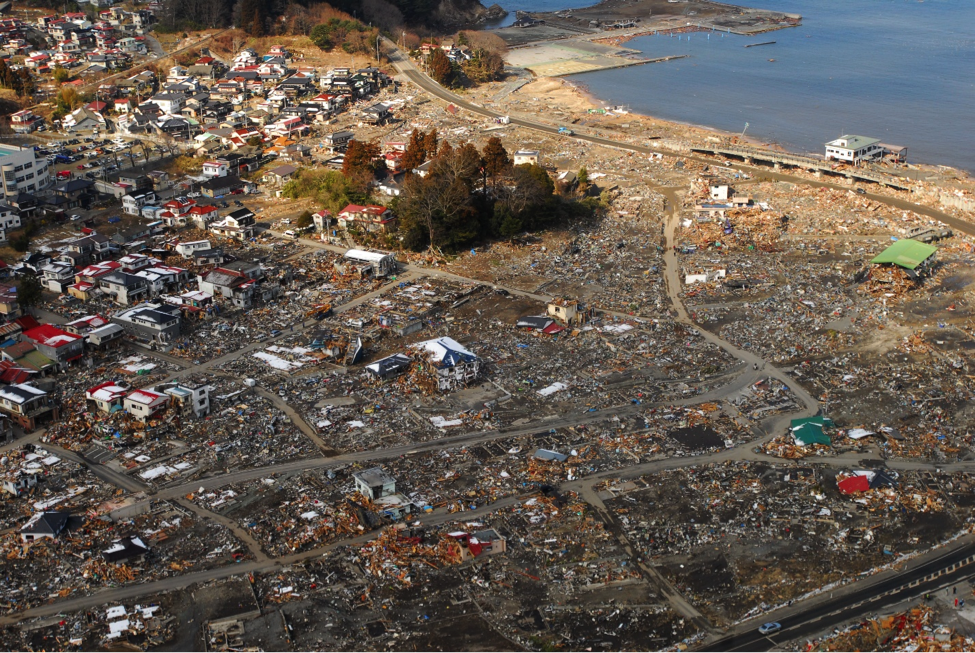 The city after the March 11 disasters. Credit: City of Higashimatsushima.

“After the disaster, some parts of the town didn’t get electricity for up to three months,” said Tohoru Ishigaki at the office of Future City Initiative under the city’s Department of Disaster Recovery Policy. “We strongly felt [after the disaster] that our responsibility was to provide reliable energy.”

Turn Local Tragedy Into a New and Vibrant Vision

To create a safe, resilient and sustainable society for the remaining population of 40,000, the city decided to deploy distributed, clean renewable energy sources. Under post-disaster recovery and reconstruction plans, the city set a bold goal to become a Net Zero Energy City by 2022, supplying the entire city with locally produced energy.

As a first step, the city turned a flood-affected former city park into a 2-MW solar photovoltaic (PV) project. This project symbolizes the city’s commitment to energy self-sufficiency. Mitsui & Co., Ltd, one of the largest trading company in Japan, completed this system in the summer 2013. The company also built PV carport systems with a total capacity of 270 kW at three locations on high ground, away from the vulnerable coastline. These sites are designated for evacuations and solar power will provide emergency power.

Higashimatsushima city is currently building Japan’s first microgrid community called Higashimatsushima Disaster-Prepared, Smart Eco-Town. The community not only can provide backup power for the grid in case of emergencies, but can allow the community to be more energy independent and environmentally friendly.

This microgrid community is a joint project between the city and Sekisui House, the Japan’s leading house developer, with a research funding from the Ministry of Environment. The community consists of 70 detached, single-family homes and 15 multifamily apartment buildings, all of which are owned by the city and are rented to 85 families who lost homes four years ago. 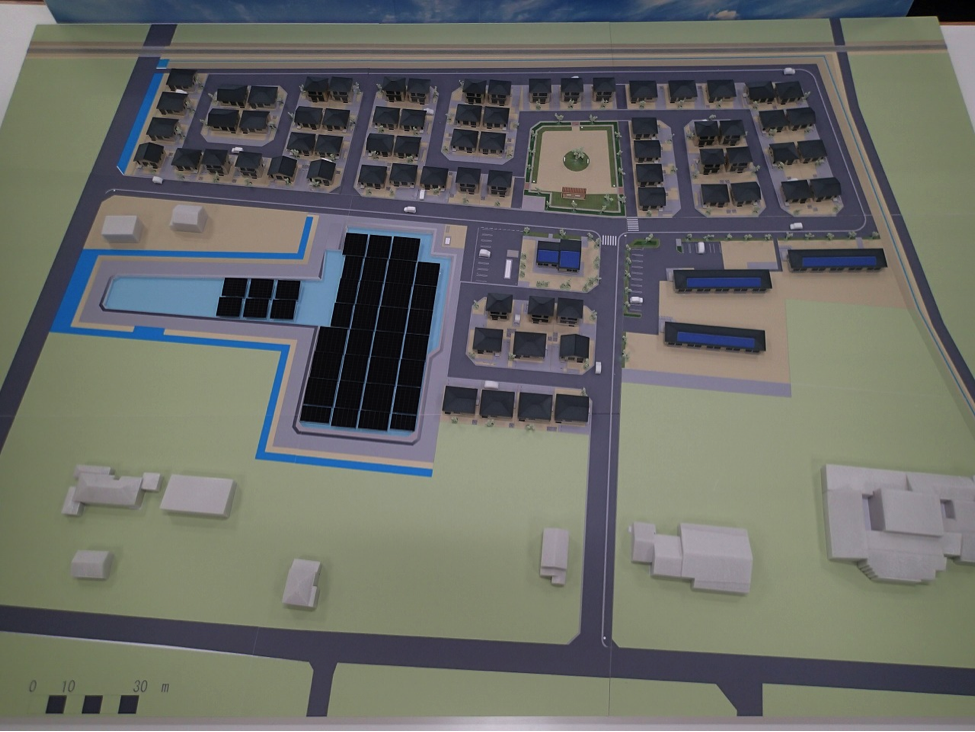 “The homes are earthquake-resistant, high-insulating steel framed buildings with advanced energy efficiency,” explained a Public Relation manager at Sekisui House. The homebuilder had already built three Zero Net Energy (ZNE) housing communities in other disaster-affected areas in Miyagi and Fukushima prefectures. The community in Fukushima, which includes solar, fuel cell, and energy storage systems, was the first ZNE community ever built in Fukushima.

Sekisui House is currently finishing up constructions at the Smart Eco-Town, and by this August it will be open for new tenants who are eagerly looking forward to coming back to the hometown.

The community also includes four hospitals, a few public buildings and a park.  Energy loads at this community will be served by the integration of distributed, clean energy — PV systems (470 kW) and bio-diesel generator (500 kW) together with a large-scale energy storage (500 kWh). When the centralized power grid becomes unavailable, the community will be able to function autonomously.

There are three PV systems in this community: a 400-kW PV system over a reservoir, a 60-kW system on the apartment buildings, and a 10-kW system at the assembly hall, which serves as a community-gathering place in case of emergencies. Any excess electricity generated from these PV systems during the day will be stored in the battery system and used at night.

What is more unique about this project is the town’s electrical grid infrastructure is developed and owned by the city, instead of by a regional electric power company, which operates as a regulated monopoly. “The city has invested in a smart grid infrastructure, building grid lines, poles, distribution substations, and smart meters for this town,” said Ishigaki.

Having its own distribution system, the city will get an electricity supply contract with Tohoku Electric Company (the regional utility) or renewable energy independent power producers (IPPs) and distribute electricity to each 85 households in the town.

With a Community Energy Management System (CEMS), the city can monitor electricity consumption and generation data via individual smart meters, manage energy storage system for peak-demand shaving, and bill customers. During emergencies, the system will start the biodiesel generator and control and balance energy needs with solar and energy storage.

The city of Shigashimatsushima is making a huge transition with an ambitious plan to replace the traditional centralized energy grid with an interactive grid, which would deliver energy from cleaner, more sustainable sources generated from distributed power systems.

“Most importantly, first we need to improve our energy efficiency from the residential and industrial sectors in the city to reduce our carbon footprints, then deploy renewable energy,” said Ishigaki. The city has a goal to reduce its foot print by 8 percent from the 2010 level by 2020.

Furthermore, for the city to provide 100 percent of electricity needs by 2022, it will need to install between 33 and 44 MW of renewable energy capacity from solar, wind, and biomass generation. Currently, the city is conducting extensive feasibility studies on the local renewable resources to address climate change while stimulating a local economy.