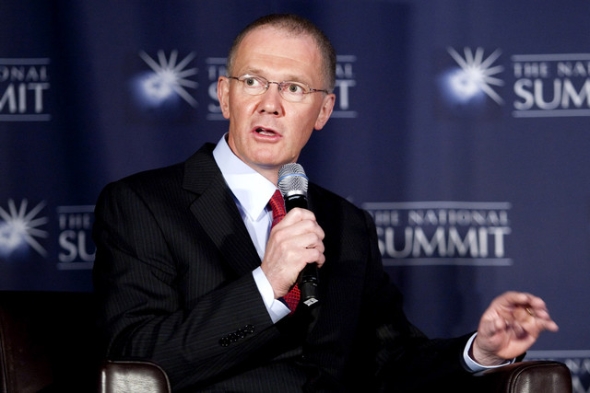 SAN FRANCISCO — Alan Shaw, the chemist and executive who led a six-year effort to turn inedible crops into fuels to displace gasoline, has renounced the industry he helped pioneer and decided the future instead lies with natural gas.

Formerly chief executive officer of Codexis Inc. (CDXS), the first advanced biofuel technology company to trade on a U.S. exchange, Shaw now says it’s impossible to economically turn crop waste, wood and plants like switchgrass into fuel. He’s trying to do it instead with gas, in his new post as CEO of Calysta Energy LLC.

Shaw’s views put him at odds with the emerging segment of biofuels that’s invested about $3 billion since 2008 in the U.S. developing processes that turn biomass into new types of fuel. Amyris Inc. (AMRS) and Gevo Inc. (GEVO) are among producers that have yet to make fuel on commercial scales and slid since their initial public offerings.

“Everybody but me is still in this nightmare,” Shaw, 50, said in an interview in San Francisco. “This model is broken.”

Codexis kicked off its biofuel program in 2006 with backing from Royal Dutch Shell Plc (RDSA), the first oil company to support the development of enzymes that break down organic material into sugars that are fermented into ethanol.

The company shuttered its biofuel research program with Shell in August and “refocused our business on the pharmaceuticals market,” according to Codexis’s April 2 annual report. “Cellulosic fuels and chemicals are not widely manufactured at commercial scale because their unit production economics have not yet been shown to be competitive with incumbent petroleum.”

Shell provided $375 million in backing over six years, said Shaw, who left the company in February 2012. Meaghan Barbin, a Codexis spokeswoman, didn’t reply to questions about its current biofuels efforts.

The collapse of U.S. gas prices to 1990s levels, owing to the shale-gas bonanza, is sucking investment away from traditional biotech companies and delivering it to startups focused on fossil-fuel feedstock, such as Calysta.

Siluria Technologies Inc. CEO Edward Dineen stepped down in January from the same post at biofuel company LS9 Inc. to commercialize a Massachusetts Institute of Technology process for converting methane into ethylene, the world’s most valuable chemical commodity with about $175 billion in annual sales. Ethylene can be used to make fuels, and Dineen plans to license Siluria’s catalytic technology to petrochemical companies.

“The world seems to be finding more and more gas, so I feel very comfortable with the feedstock story here,” said Dineen, who remains on LS9’s board.

While companies such as Poet LLC and Abengoa SA (ABG) have been producing standard corn ethanol for years, businesses seeking to develop the next generation of cellulosic biofuels from non-food crops have struggled to perfect their technology, because of a host of obstacles.

Shaw said he doubts these ventures will be viable, mainly because the biomass feedstock needed to run the plants isn’t as easy or cheap to produce as the companies promised. It takes about six metric tons of raw material to yield a ton of ethanol, a “huge” amount, he estimated.

Shaw’s efforts at Codexis helped put advanced biofuels on the map, and Codexis was the first company to convince public markets to support the idea of a biological process for making ethanol, gasoline and diesel from plants with its April 2010 IPO, said Ben Kallo, an analyst with Robert W. Baird & Co. in San Francisco.

Shaw “introduced industrial biotech to public investors,” Kallo said. “He did kind of sell the vision.”

The vision has yet to become reality. Codexis shares closed at $2.24 yesterday, down 83 percent from the IPO price. Gevo halted production in September at its flagship plant after production yields fell short of expectations. Amyris and Solazyme Inc. (SZYM) are getting most of their revenue from selling small volumes of high-margin chemicals.

Those markets aren’t as large as the “multi-billion” dollar fuel opportunities the companies emphasized in their IPO road shows, Shaw said. “You cannot convert biomass, or sugar, into large volume chemicals because you’ll never make money,” he said. “Specialist oils, yes, but that’s not what this was about.”

It’s too soon to write off the entire field, said Solazyme CEO Jonathan Wolfson. The South San Francisco, California-based company created algae that eats plant sugars and produces oils that are processed into fuel or chemicals.

“Advanced biofuels is in its infancy compared to wind and solar,” Wolfson said in an interview. “These kinds of things take time.”

While some of the early promises about the industry’s potential may have been overstated, Wolfson said, “I vehemently disagree with the observation that you can’t make money converting biomass or sugar into fuel at large volume.”

Amyris isn’t “making any bets on the timing of the commercial viability of cellulosic sugars,” Joel Velasco, a spokesman for the Emeryville, California-based company, said in an e-mail. “Cellulosic sugar is going to take a long time to be commercial.”

Conventional biofuel producers are also moving into advanced biofuels. Poet, the second-largest ethanol producer, and Abengoa, which operates Europe’s largest ethanol refinery, are planning to open plants in the U.S. this year that will turn plants into cellulosic ethanol.

The basic concept behind advanced biofuels, using bioengineered microorganisms to digest organic matter and produce hydrocarbons, is sound, Shaw said. The flaw is basing an industry on plants.

“What’s wrong with this picture is the feedstock is wrong,” he said. “Not the product and not the biology.”

Non-food biomass feedstock will eventually be available at an economical price, said Gevo CEO Pat Gruber. The Englewood, Colorado-based company uses corn to make isobutanol, a compound that may be blended with gasoline or converted into hydrocarbon fuels and chemicals. Its system also works with crop waste and other plant matter.

Other companies in the biofuel supply chain, including Virdia Inc. and Beta Renewables SpA, are developing techniques to efficiently extract sugars from plants, streamlining the process and making it more cost effective, Gruber said. “It’s too early to call the game about anything related to advanced biofuels.”

Shaw joined Calysta as CEO in October. The Menlo Park, California-based company is focused on a type of bacteria known as a methanotroph, or “methane eater,” that converts the carbon in gas into diesel fuel through a fermentation process.

“People have been trying to convert gas to liquids for a long time,” said Frances Arnold, a chemical engineering professor at the California Institute of Technology.

“Back in 2004, we didn’t anticipate the abundance of gas that was going to be available,” said Arnold, who co-founded Gevo and formerly served on Amyris’s scientific advisory board. “That’s a big change, and it would be foolish not to consider that with a biological route.”