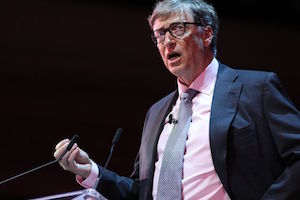 Somehow these two men managed to speak recently with at least a modicum of productivity, according to Gates. The call happened two weeks ago for about eight minutes, letting Gates present a small part of his philanthropic and investment agenda.

“The key point I was pushing there was the opportunity for innovation in not only energy but also medicine and education and encouraging the idea that that’s a great deal and a great thing for American leadership,” Gates said.

Asked if the call, and Trump’s recent appointments, made him optimistic, Gates said, “Well, we’ll see. Innovations could be bipartisan. We should all do our best.”

These comments from Gates came during an interview on Monday about a new investment fund he and other billionaires started called Breakthrough Energy Ventures. Gates has tapped his vast network of technology and energy bigwigs to raise more than $1 billion that will be at the fund’s disposal, starting in 2017. The goal is to increase investments in energy-related technologies that will reduce, if not eliminate, greenhouse gas emissions.

Investors in Breakthrough Energy Ventures include Jeff Bezos, chief executive officer of Amazon.com Inc.; Richard Branson, the founder of Virgin Group Ltd.; and Michael Bloomberg, the founder of Bloomberg LP. There are also prominent venture capitalists like John Doerr and Vinod Khosla, who have pumped a lot of money into green tech companies in the past.

Gates has personally invested about $1 billion into energy technology, he said. The company he has backed most is TerraPower. This Bellevue, Wash.-based startup has raised $300 million — most of it coming from Gates — to make more efficient, safer nuclear reactors. The company’s research has also been supported by the U.S. Department of Energy, groups in China and Southern Co., a utility company based in Birmingham, Alabama.

It’s the TerraPower model that Gates hopes to emulate with Breakthrough Energy Ventures. The fund plans to assemble teams of top scientists to evaluate ideas across five areas: electricity, transportation, agriculture, manufacturing and buildings. In each case, the researchers will be looking for radical advances that could create a dramatic shift in greenhouse gas production. When an idea appears promising, the fund will get it off the ground and then turn to public institutions and companies to judge the viability of the technology. If the idea again passes muster, the investors will try and work with companies like Southern Co. to advance the technology and bring it to market.

Gates has increasingly sounded the alarm that nothing short of an energy “miracle” will curb the effects of global warming, particularly as underdeveloped regions advance and chase modern lifestyles.

“We are going to focus on things that have a big impact here,” Gates said. “We will be more selective than a lot of the green investments have been to date. The question you have to ask is, ‘Is the science out there?’” He hopes the answer is a resounding, “Yes.”

“We would love to have the money go out in two to three years,” Gates said. “But it’s more likely that it will take five years to deploy the capital. If we have good ideas, we will add new rounds to this. I don’t think we’ll have any difficulty doing that.”

Each year, the fund will try to back five ideas, although Gates hopes the number will be even higher if the ideas are there.

Many venture capitalists have soured on green tech after a string of busts like Solyndra, Better Place and Fisker Automotive churned through mountains of capital, foundered and then received equally vast amounts of negative press. Gates, though, pointed to Tesla Motors and Impossible Foods as success stories.

Following his call with Trump, Gates acknowledged that there are likely to be severe cuts around green technology. “We will probably see at the federal level less incentives for renewable deployment,” he said. “That is unfortunate.”

Still, he tried to find some positives from the conversation — particularly those that tied in well with the new fund.

“I do think the most bipartisan piece of energy policy has been a commitment to energy R&D,” he said. “So, if your framework for looking at where the government should do more is where it’s a good deal for American leadership and jobs, I actually think there is some upside. I think in the R&D space we may see more investment.”