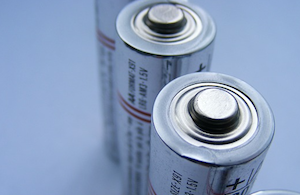 A metal that’s in demand for batteries is surging, and it’s not the one everyone’s talking about.

Vanadium has soared more than 130 percent in the past year, outperforming better-known battery components like cobalt, lithium and nickel. It’s an obscure metal, silvery-blue in color and named for Vanadis, the Nordic goddess of beauty.

What’s driving prices is tightening supply and strong orders from the steel industry, which accounts for 90 percent of demand today.

But in the future, analysts are expecting a shift in uses of vanadium. The metal can also be used in industrial-scale batteries, which help to even out daily peaks and troughs from renewables like wind energy. The move to green energy could create a new market and start a scramble for supply, according to BMO Capital Markets.

With governments committing billions to green energy, large-scale back-up battery projects are popping up around the world, including one built by Elon Musk to support the grid in the Australian outback. He built the plant — the largest of its kind — in less than 100 days using the same lithium-ion technology powering Tesla cars.

“Energy-storage technology itself isn’t new, but we’re seeing this moment where a company like Tesla comes along and changes the way people think about its potential,” Anthony Milewski, a managing director at Pala Investments Ltd. in Switzerland. He runs one of the few funds investing in battery metals, which can be near-impossible for outsiders to trade.

Currently, the dominant form of energy storage is lithium-ion technology, but there are advantages to vanadium-flow batteries. They last longer and can be charged and discharged repeatedly without any significant drop in performance. They are also easy to recycle and good for projects where space isn’t an issue.

“I don’t think anyone would dispute that it’s superior to lithium-ion in large-scale grid applications,” Milewski said.

In China, vanadium-flow batteries are emerging as an alternative to lithium-ion, according to Gary Yang, founder of UniEnergy Technologies, a maker of vanadium batteries in Mukilteo, Washington. The government is promoting the technology and among the projects under construction is a backup power facility in Dalian that will be twice the size of Tesla’s plant in Australia.

Vanadium pentoxide, a powder form of the metal used in batteries and the steel industry, has rallied 27 percent this year to $12.38 a pound, according to Metal Bulletin Plc. Prices are getting a boost from China, where authorities are demanding stronger steel for buildings in earthquake-prone areas.

One risk is that high prices will lead manufacturers to use a different material. For example, rare earth prices surged earlier this decade, spurring companies to find alternatives.

“Because it’s not been widely adopted yet, it may not make economic sense if prices go to the moon too quickly,” said Pala’s Milewski.

Vanadium-flow battery makers are vulnerable because they depend so much on one niche material, said Simon Moores, managing director of Benchmark Mineral Intelligence in London. The industry also lacks a high-profile champion like Elon Musk.

“Vanadium flow has yet to have its Tesla moment, and therefore it still flies under the radar,” he said.