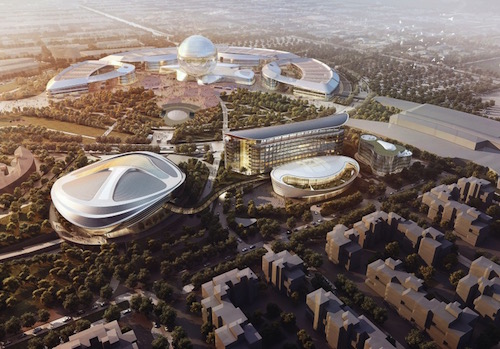 Representatives of 115 countries and 18 international organizations will gather in the heart of Eurasia from June 10 through September 10 to discuss the reduction of carbon dioxide emissions, environmental protection and promotion of an energy-efficient lifestyle.

The Energy Best Practice Area (eBPa) will become one of the central facilities at EXPO 2017. It will showcase the 24 best green energy projects from 13 countries.

The visitors will be able to learn about technological innovations from France, Kazakhstan, Russia, the U.K., Italy, Germany, Austria, India, Canada, the U.S., Finland, Poland and Hungary. The most remarkable projects will include Solar Impulse ─ a solar-powered aircraft project; last year, the aircraft made its first journey around the world, and became a global sensation.

France will showcase its project Glowee – a biological source of light using natural properties of marine microorganisms. Glowee will make it possible not only to alleviate the negative impact of the use of energy, but also to provide electricity for people living in remote regions of the world who have no access to energy.

The U.S. will surprise EXPO 2017 visitors by showing them a Bioo device that generates electricity from plants’ photosynthesis. This technology is more efficient than solar panels. Bioo generates energy 24/7 and does not depend on weather. A small garden is sufficient for providing an ordinary house with energy.

Creators from Austria will showcase a solar-powered cycle rickshaw in the Energy Best Practice Area. Solar panels installed on the top provide it with energy, which makes it possible to generate even more power than a person, who is riding a bicycle, usually generates.

Hungary will demonstrate an environmentally friendly road surface which is to generate electricity from various renewable energy sources including solar power.

Apart from that, the visitors will be able to see technologies such as transformation of electricity into gas (Germany); electrification of remote and mountainous regions of India by setting up solar microgrids (India), and several other developments.

The world’s best green energy projects were selected by the International Selection Committee (ISC) which includes Nobel Laureates and international experts in the sphere of energy and climate change.

During the application acceptance period (from February through September 2016), the International Selection Committee considered 133 applications from 30 countries.

The International Specialized Exhibition Astana EXPO 2017 ‘Future Energy’ will take place between June, 10 and September, 10 2017 in Astana. The exhibition will last 93 days and will become one of the most spectacular cultural venues in 2017. To date, 115 countries and 18 international organizations have confirmed their participation. As part of Astana EXPO 2017, global policy documents will be drafted in order to promote an energy-efficient lifestyle and wide use of renewable energy sources.

Overall, the event expects 5 million people. The visitors will be able to attend over 3 thousand themed and entertainment events.