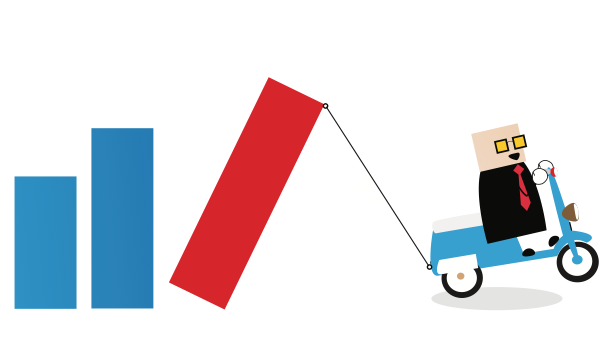 Behavioral economic theory holds that human interactions are complex and that economic motivations include nuance beyond that of maximizing utility. This is certainly true of the global solar industry as throughout its history it has interacted within a context of here-one-day-gone-the-next incentives and subsidies, expectations of significant price drops, competition with well-subsidized conventional energy technologies as well as a continuing perception among many that solar remains a science experiment.

Solar industry participants have a preference for very big numbers and forecasts as well as for optimistic outlooks for the future.  Any deviation from the celebration of really big numbers or any notion that strays from the optimistic status quo is typically ignored.

Cherry-picking facts — be they optimistic or pessimistic — to make a point without considering context and nuance, will almost always lead to poor decision-making.

Market research is about the study of behavior over time using data and should consider luck, happenstance, nuance, unexpected events both positive and negative as well as herd mentality and individualism.  When market research does not consider these things it is marketing.

During its more than 40-year history as a terrestrial source of electricity, the global photovoltaic industry has existed in an energy ecosystem in which demand for grid connected installations is driven by incentives, while demand for off grid installations operates almost entirely under free market conditions.

As PV industry incentives are inherently unreliable, the effect has been to form an industry personality profile that will engage in available demand even when this demand is not profitable. 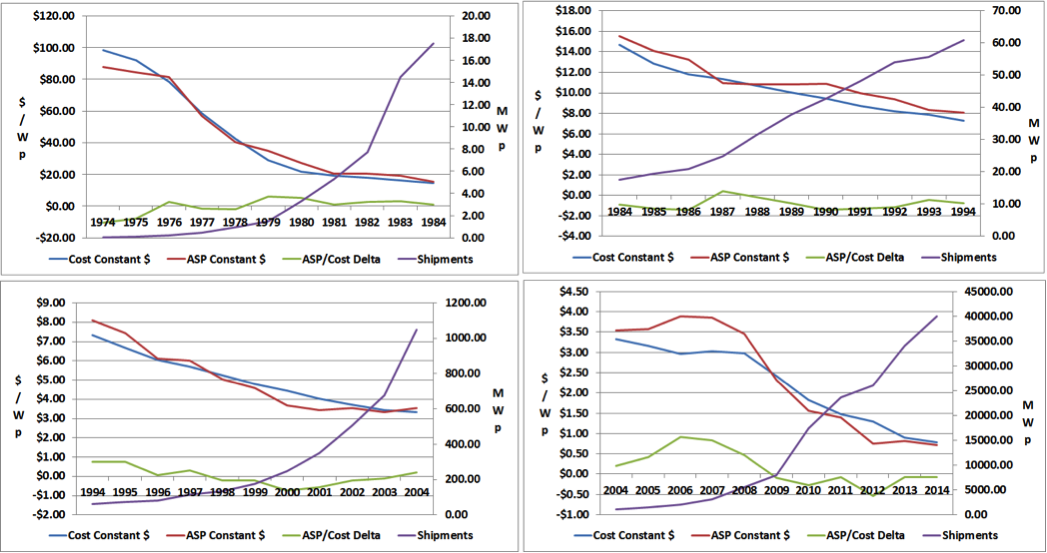 The 1974-1984 timeframe represents the beginning of terrestrial PV deployment and was dominated by off grid applications as well as consumer indoor (calculators, watches, etc.).  In particular, government demonstration projects into grid connected applications as well as consumer indoor growth dominated PV deployment.  During this period, grid connected application growth was 100 percent driven by one-off utility and government demonstration projects.

From 1984-1994 there were relatively few government and utility demonstration projects and few incentives.  As a result, photovoltaic crystalline and thin film manufacturers (primarily a-Si) priced modules below cost and showed a willingness to continue producing and shipping at negative margins.

The 1994 through 2004 period saw an increase in government legislated incentives beginning with capacity based incentives and culminating with the beginning of the feed in tariff incentive in Europe.

During the mid to late 2000s, the European Feed in Tariff incentive drove demand to gigawatt levels and did it fast; too fast for an industry used to start/stop incentives to do more than react to a suddenly strong market. This period did not afford PV industry participants time for planning or attention to quality and those who had available capacity benefited while the rest played catch up.  Prices for all technologies increased and long-term contract prices for polysilicon, wafers, cells and modules increased significantly. Profitability was a new experience for PV industry participants and with crystalline modules in short supply thin films became the hope for future under the simple assumption that a-Si, CdTe and CIGS/CIS technologies would be less expensive to manufacture.  The turnkey manufacturing model, primarily for tandem junction amorphous silicon, gained popularity during this period under the, again simple, assumption that it would allow new entrants with little to no PV manufacturing experience to rapidly commercialize their products.

From 2004 through 2008, the European feed-in tariffs (FiTs) drove global demand with Europe’s share of deployment rising to over 80 percent of the global total.  The FiT incentive proved expensive to support and governments eventually began instituting retroactive changes and rapid reductions.  The retroactive changes disappointed investors while the rapid reductions in FiT rates cemented industry participant behavior, that is, once a reduction was announced, participants would deploy at an even more rapid rate, accepting lower margins as a necessary cost of continued deployment.  During this period the global photovoltaic industry settled into a frenetic and often unprofitable behavior pattern.

It is worth noting that the grid connected application continues to require incentives. For the residential application in the US, the no-money-down solar lease deploys a marketing come-on similar to used car sales to attract customers.

The point is that an economic stimulus of some sort, even an illusory one, is still necessary to stimulate the market for PV installations. The PV industry’s reliance on incentives has created and fomented a specific behavior among the demand and supply participants (manufacturers and those who buy and install modules).

When an incentive such as the ITC is set to time out or decrease installation activity increases significantly.  In the specific case of ITC-driven projects that have a long development timeline deployment of systems >50-MWp are stalling while deployment into the residential and small to mid-commercial application, that is, systems that can be installed by the end of 2016, is accelerating. The acceleration of smaller system deployment gives the false impression that demand is organically increasing.

Concerning pricing, PV industry participants have made promises of rapidly decreasing prices for modules and systems that cannot always be profitably kept.

Forecasts in unstable and vulnerable industries such as solar are highly uncertain and are prone to unexpected upsets and manipulated outcomes via government action.  Expectations for escalating deployment have become so engrained that envisioning slower, healthier and potentially more profitable growth has become an anathema to industry participants and stakeholders – though privately the industry’s traditionally low margins are not celebrated.

Near term outcomes are reasonably clear.  The market for photovoltaic deployment in the US will accelerate through the beginning of Q4 2016, unless the ITC is extended at 30 percent. As incentives time out in Europe, deployment will continue slowing while lawsuits over retroactive changes to FiTs will continue accelerating. In Japan, rule changes and the decreasing FiT is already slowing the market.  The real question about Japan is whether the landing will be hard or soft. In China, the government may well tire of supporting the demand and supply sides of its photovoltaic market.  Demand in Latin America, for a variety of economic and political reasons, has never been as strong as projected. And so on and so forth … and yet, despite all the obstacles and challenges, the global solar industry continues in part because of a closely held belief that it is the right thing to do.

Government market and price manipulation, addiction to incentives and optimistic forecasts aside, this last characteristic of the global solar industry is not an illusion.