LONDON — Balancing power supply and demand is always a complex process. When large volumes of renewables such as solar PV, wind and tidal energy, which can change abruptly with weather conditions, are integrated into the grid, this balancing process becomes even more difficult.

The issue for power plants is flexibility. “Large amounts of wind energy are being reliably and cost-effectively integrated onto the power system today,” said Denise Bode, CEO of the American Wind Energy Association (AWEA), who added “Energy storage can be a valuable resource for the power system in maximising the efficient use of this resource, and add flexibility for electric utilities.”

The Electric Reliability Council of Texas Inc. (ERCOT) faced the renewable power industry’s most critical issue in February 2008. With a huge wind portfolio in the state the wind died down, and ERCOT declared emergency conditions after a 1200-MW drop in production. The three-hour shortfall, accompanied by increasing overall electricity loads, very nearly caused rolling blackouts. David Crane, president and CEO of New Jersey-based NRG Energy Inc., told the Houston Business Journal that “If a system can go unstable in the winter because 1500 MW of expected wind turns into 400-MW wind and then fossil has to scramble to come online – and several of our plants had to scramble to fill the gap – that’s a big issue and there’s going to be a big debate.”

Effective energy storage can match total generation to total load precisely on a second by second basis. It can load-follow, adjusting to changes in wind and solar input over short or long time spans, as well as compensating for longterm changes. While fossil plants may take 10 minutes or more to come online, and will consume fuel even on “spinning reserve” standby, storing renewable energy for later use effectively produces no emissions.

“Grid-scale storage is here now,” says Ed Cazalet of MegaWatt Storage Farms, which develops and operates large electricity storage facilities that connect directly to the wholesale electric grid. “Storage should be deployed now at the gigawatt scale…where capacity, ancillary services and energy time-shifting are clearly needed,” he adds. But each power plant faces different issues, and each requires a tailored energy storage solution.

Some well-established technologies offer significant energy storage capacity but require specific geographical features and considerable infrastructure. Others can be deployed rapidly to wherever they are required, but currently offer restricted capacity, often at high cost. One technology that is now attracting considerable interest is large-scale battery storage.

Several types of batteries are used for large-scale energy storage. All consist of electrochemical cells though no single cell type is suitable for all applications.

Invented in 1859, lead-acid batteries use a liquid electrolyte and are still in common use. They store rather small volumes of energy but are reliable and, above all, cheap. In renewable energy systems multiple deep-cycle lead-acid (DCLA) batteries, which provide a steady current over a long time period, are connected together to form a battery bank. Indeed, banks of up to 1 MW of lead-acid batteries are already being used to stabilise wind farm power generation. For instance, Trojan Battery Company’s industrial line of deep-cycle batteries is designed for backup and peak shifting in off-grid and grid-tied photovoltaic (PV) systems.

In a dry cell battery, the electrolytes are contained in a low-moisture paste. Lithium-ion (li-ion) batteries in particular are the subject of much interest as they have a high energy density, and larger-scale production due to emerging electric vehicle applications is expected to bring down their cost significantly.

A123 Systems is involved in a demonstration project with Southern California Edison which will see 32 MWh of li-ion battery capacity integrated with wind turbines in the Tehachapi region 100 miles (160 km) north of Los Angeles.

Mitsubishi Heavy Industries is beginning tests of a 40-foot (12 metre) long container unit housing more than 2,000 li-ion rechargeable batteries. According to the company, the system has a capacity of 408 kWh – enough to supply 100 households for three to eight hours and is designed to have a system efficiency of 90 percent. As well as grid power stabilisation, the system will be tested for micro-grid use in areas where regular grid connections are difficult, providing a stable supply of electricity from renewable sources.

Flow batteries are emerging energy storage devices that can serve many purposes in energy delivery systems. They can respond within milliseconds and deliver significant quantities of power. They operate much like a conventional battery, storing and releasing energy through a reversible electrochemical reaction with an almost unlimited number of cycles. The active chemicals are stored in external tanks, and when in use are continuously pumped in a circuit between the reactor and tanks. The great advantage is that electrical storage capacity is limited only by the capacity of the tanks.

Vanadium Redox Batteries (VRBs) are a particularly clean technology, with high availability and a long lifecycle. Their energy density is rather low – about 40 Wh per kilogram – though recent research indicates that a modified electrolyte solution produces a 70 percent improvement in energy density. Vanadium prices are volatile, though, with the increased demand for battery use likely to stress supply. Prudent Energy has installed a 1-MWh VRB energy storage system, sized at a rated power of 500 kW and a peak pulse power of 750 kW, for the China Electric Power Research Institute (CEPRI) in Zhangbei, Hebei province. Research group the Fraunhofer Institute is developing a giant 20-MWh flow battery. A 20-kW facility is planned to be operational next year; and the research team hopes to cross the megawatt threshold within five years.

Researchers at Case Western Reserve University are using iron to create a scalable energy storage system that can service a single home or an entire community. Robert Savinell, professor of chemical engineering at Case Western, calls it the rustbelt battery. Since the cost of iron is as little as 1 percent of that of vanadium, the iron-based battery is estimated to cost US$30/kWh, well below a $100/kWh goal set by Sandia National Laboratories. A large-scale 20-MWh iron-based flow battery would require two storage tanks of about 250,000 gallons (950 m3), and could supply the power needs of 650 homes for a day. The US Department of Energy’s Office of Electricity Delivery and Energy Reliability is funding the research with a grant of some $600,000.

Molten salt batteries (or liquid sodium batteries) offer both high energy density and high power density. Operating temperatures of 400-700¬∞C, however, bring management and safety issues, and place stringent requirements on the battery components. In 2010, Italy’s Enel opened the 5-MW Archimedes solar farm, the first in the world to use molten salt technology.

Ultracapacitors (or supercapacitors) store energy electrostatically by polarising an electrolyte, rather than storing it chemically as in a battery. Ultracapacitors have a lower energy density but a higher power density than standard batteries: they store less energy (around 25 times less than a similarly sized li-ion battery) but can be charged and discharged more rapidly.

Although ultracapacitors have been around since the 1960s, they are relatively expensive and only recently began being manufactured in sufficient quantities to become cost-competitive. Ultracapacitors have applications in ‘energy smoothing’, momentary-load devices, vehicle energy storage, and smaller applications like home solar energy systems where extremely fast charging is a valuable feature.

The Electricity Storage Association (ESA) compared energy storage technologies for high power and high energy applications, as illustrated in Table 1 (below). Each technology has inherent limitations or disadvantages that make it practical or economical for only a limited range of applications. 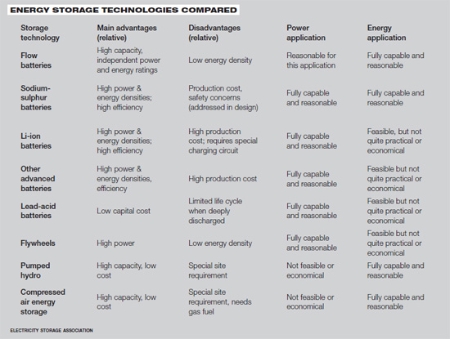 Frost & Sullivan’s analysis of the European utility-scale battery market found earned revenues of $126.4 million in 2010 and the company says it expects this to increase to $564.9 million in 2015.

Li-ion batteries will grow from $795 million in revenue in 2011 to $2.2 billion in 2016, the report states, adding that thanks to its improved cycle life and energy density over lead-acid batteries, li-ion will see narrow penetration into the high-end datacenter market. If li-ion developers can trim costs 33 percent to $400/kWh and demonstrate improved lifetimes, the technology could usurp further market share.

Tildy Bayar is a freelance journalist focusing on the energy sector.