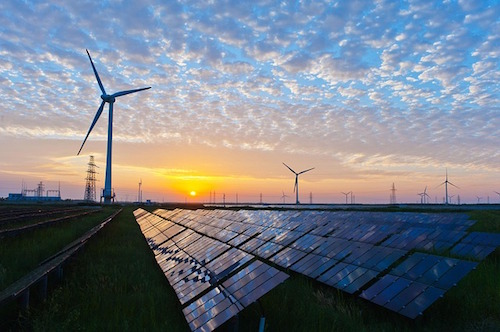 For years — actually decades — the conventional wisdom about electric power has gone something like this: clean generation sources like wind and solar power are great, supplementing the energy mix with an increasing share of carbon-free electrons. But their intermittency is a huge issue. We will always need the 24/7 baseload generation powered by nuclear or fossil-fuel (or, where available, biomass or geothermal) generators as the basis of a safe, reliable, and affordable electricity supply.

Now jump to June of this year, when Pacific Gas & Electric announced it wants to decommission the 2.2-GW Diablo Canyon nuclear plant when its current license expires in 2025. Cost is a key factor of course; PG&E projects that the levelized wholesale cost of relicensed Diablo Canyon power (from 2025 to 2045) would be 14.9 cents/kWh, compared with 9.8 cents/kWh for what California regulators call preferred resources (mainly renewables and efficiency). A decision on the plant closure is pending with state regulators, but cost is not the only issue.

“Having a 24/7 nuclear plant, from a grid operator’s standpoint — that is a real problem,” says David Olsen, a member of the board of governors of the California Independent System Operator (CAISO), the grid serving 30 million people in most of California and a small part of Nevada. “Dealing with 2,200 MW coming in at every minute — we have to design our grid around that inflexibility. ‘Baseload’ refers to an old paradigm that has to go away.”

Olsen’s assessment, which is echoed by many other California grid experts, regulators, and utility executives, completely flips the old paradigm. In a world of minimum or even negative overall load growth, ever-increasing distributed solar generation and energy storage behind the meter, and emerging ‘load-shifters’ like electric vehicles, variable generation resources become more valuable, not less.

“I got the ISO to stop using the word ‘intermittent’ for wind and solar,” says Olsen. “They have variable output; what used to be called baseload is constant output, but it doesn’t have to the ‘base’ of your energy stack. In fact, I consider fossil-fuel plants to be the intermittent ones, because they have to be taken offline completely for maintenance or when there’s a problem.”

I spoke with Olsen at a recent SunPower event in Davis, California, near that company’s 16-MW solar PV plant that supplies 14 percent of the power used by the sprawling 5,300-acre campus of the University of California-Davis, by far the largest in the UC system. That’s just a tiny microcosm in California, where many experts, and CAISO, project that the state will reach 50 percent renewable power well before the RPS mandate year of 2030 for its investor-owned utilities.

But that’s California, you might say, with last year’s 15 GWh of solar generation nearly twice as much as the next four leading states combined, and #1 in Clean Edge’s U.S. Clean Tech Leadership Index for seven years running. True — and with apologies to smaller-state clean energy leaders like Hawaii and Vermont, California’s sheer volume makes it, along with Germany, arguably the world’s most influential clean energy pioneer. But it is not alone in this electricity mix/grid planning paradigm shift — wait, forget that overused moniker. I’m going with paradigm upheaval.

The city of Denton, Texas, is aiming to receive 70 percent of its electricity from wind and solar resources by 2019.

“Denton is changing the electricity generation paradigm by using renewables as our baseload power, and then using highly efficient, quick-starting generation, as needed, when the wind doesn’t blow and the sun doesn’t shine,” says Mike Grim, executive manager of Denton Municipal Electric. The muni recently contracted with Wartsila for a 225-MW gas-fired internal combustion genset to provide power balancing. It’s worth noting that this is taking place in a county that voted for Republican Mitt Romney over President Obama in 2012 by a 65-34 percent margin — demonstrating once again how clean energy is making great advances in politically “red” areas.

And even in regions without significant non-hydro renewables on the grid, energy efficiency alone is changing utility dynamics and mindsets. Tennessee Valley Authority CFO John Thomas told a recent meeting of TVA executives that the end of consistent 3-4 percent annual load growth — and even potential negative load growth in coming years — “makes all of us very concerned” about adding baseload sources like nuclear, coal, natural gas, or hydro. This year’s summertime peak demand in TVA’s service territory was 7 percent lower than in 2007, with comparable steamy Southeast temperatures in each year. And this is far from the nation’s most energy-efficient region — of the seven states served by TVA, Tennessee’s #25 ranking is the region’s highest in the American Council for an Energy-Efficient Economy’s 2016 Policy Scorecard released last week.

As utilities and grid operators move forward in this new world, flexibility, not 24/7 output, will be the name of the game.

“There’s a lot we can do to make generation more flexible,” said Jim Avery, chief development officer at San Diego Gas & Electric, at last month’s Solar Power International convention in Las Vegas. “But nuclear is the least flexible generation ever invented.” Among other initiatives on this score, SDG&E is deploying two AES battery storage arrays totaling 37.5 MW in a deal announced in August.

SDG&E’s generation mix currently includes about 33 percent from wind and solar. Calling those resources variable or flexible rather than intermittent is good, but I prefer the word favored by noted clean energy consultant Katherine Hamilton, principal at 38 North Solutions: “dynamic.” That’s what is needed in this new world of increasing renewables and storage on both sides of the meter, demand response, smart inverters, EVs, microgrids, and much more — plus future game-changer innovations not even here yet.

“Traditional baseload is based on the paradigm of centralized dispatch out to customers who have no control,” says Lorenzo Kristov, principal of market and infrastructure policy at CAISO. “As we shift to more production at the local side, what you really start to get is baseload energy in a decentralized manner.” That is a change of massive proportions, and we’re just at the beginning.