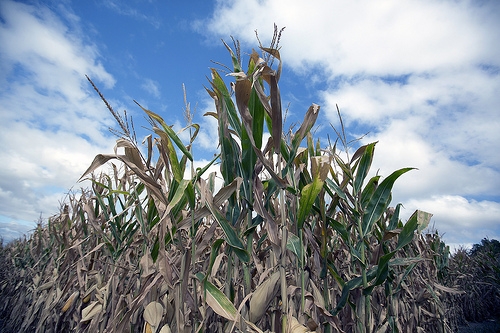 A global food crisis may “hit us very soon” as a drought ravages corn crops in the U.S., the world’s largest grower, the International Food Policy Research Institute said.

Governments must act to prevent the crisis, Shenggen Fan, director-general of the institute, said today. The U.S. should end its biofuel program that uses 40 percent of its corn output, to boost supplies to meat producers, Fan said. The Washington- based institute, supported by governments and international organizations, is part of the Agricultural Market Information System formed by the United Nations to monitor food costs.

“The major problem is policy,” Fan said today in an interview with Susan Li on Bloomberg Television’s “First Up”. “Biofuel production has to be stopped. That actually pushed global food prices higher and many poor people, particularly women and children, have suffered.”

The price of corn, used in everything from food to livestock feed to sweeteners, surged to a record $8.49 a bushel on Aug. 10 and is up 57 percent since June 15. That helped drive up global food inflation tracked by the UN’s Food & Agriculture Organization 6.2 percent in July from a month earlier, the biggest monthly jump since November 2009.

Corn gained as the worst Midwest drought in half a century cut yields in a nation that produced 36 percent of the 2011-2012 world harvest and accounted for 39 percent of global trade in the grain, according to the U.S. Department of Agriculture.

Jose Graziano da Silva, director-general of the FAO, called for a suspension of U.S. government-mandated ethanol production to allow more of the crop to be used for food and livestock feed, the Financial Times reported Aug. 10.

Twenty-five U.S. senators and 156 members of the House of Representatives have called on the Environmental Protection Agency to halt or lower the mandate on how much ethanol the country must use this year and the next.

About 4.5 billion bushels (114.3 million metric tons) of corn was to be used in U.S. ethanol production in the year beginning Sept. 1, the USDA estimates. That’s almost as much as the combined forecast output in Argentina, Brazil and Ukraine, the three biggest shippers after the U.S., and more than global imports of 90.86 million tons estimated by the USDA for the year beginning Oct. 1.

Countries including India and China must release their food stockpiles to help the poor cope with rising costs, and governments must refrain from imposing export bans to prevent a repeat of the global food crisis in 2008, Fan said.

U.S. and French officials plan to hold a conference call in the last week of August to decide whether to organize a meeting of the Group of 20 officials to discuss surging grain and soybean prices, the French Agriculture Ministry said yesterday.

“If we don’t take urgent quick action, another crisis will hit us very soon,” Fan said. “Governments, the global institutions like the FAO, the World Bank, and the G-20 need to monitor the situation, the prices, production, trade and certain policies.”