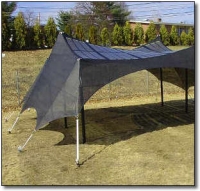 Ames, Iowa – June 21,2004 [SolarAcces.com] “Iowa Thin Film Technologies developed a new fabric integrated solar technology for field shelters that will advance the Army’s goal of reducing dependence on fuel-fired power generation and reducing logistics footprint,” Jean Hampel said. Hampel is the project engineer of the Fabric Structures Group in the U.S. Army Soldier Systems Center in Natick Massachusetts. The project began with the Army’s growing demand for portable and remote power. Funding for the project came from the Small Business Innovation Research program. Hampel searched for commercially available solar technology that had high potential for developing tents with built-in solar power generation. Iowa Thin Film Technologies worked with the Soldier Center, and with Eureka, which is a division of Johnson Outdoors. FTL Design Engineering Studio, a tensile structure design and engineering firm, worked with the fabric of the tent prototypes. “The development of these prototypes solved a number of technical problems, to significantly increase our manufacturing throughput for fabric integrated solar products,” said Frank Jeffrey, President of Iowa Thin Film Technologies. Models of the tent prototypes are a quadrant, a temper fly and a power shade field shelter. Quadrant tents are designed to go over the top of existing tents, and the temper fly is a modification of a standard Army tent design. The power shade, using a mesh fabric, can be used over an existing tent or as a stand-alone structure. Power output from the tents ranges from approximately 200 W to one kW. Several tents can be joined together for additional power. Power generated by the tents is stored in a bank of batteries, and used for a variety of purposes from lighting and ventilation to GPS and radio systems. Satellite phones and laptop computers can also be charged with the electricity stored in the batteries. “Successfully integrating PowerFilm flexible solar panels with fabric is a major milestone for fabric-based building integrated solar products for both military and commercial uses,” said Mike Coon, Chief Operating Officer of Iowa Thin Film Technologies.