Bill Gates and I are the same age. I met him at Comdex many years ago.

Back then Gates was focused on one big thing, the idea that the operating system was the chokepoint of the PC market, and that by possessing that chokepoint he could make Microsoft a big success.

Once Microsoft took the chokepoint, Gates spent the rest of his career building ahead of Moore’s Law. That worked too, for a while. Each new version of Windows had killer apps that spurred the purchase of new hardware.

But Moore’s Law keeps going, and in our time Microsoft has fallen victim to both it and its corollary, Moore’s Law of Software. (There is no Moore’s Law of Software.) Any computer program is like a house of cards. The bigger it gets, the less stable it gets, the more work it takes to keep it growing. The only solution, in the end, is to either get others to help keep you up, or to start over. Linux is others helping. Apple represents starting over.

I mention all this because Gates is making the same mistake in looking at energy today that he made then. He’s discounting progress, assuming today is the same as tomorrow.

In terms of today’s economics it’s true. Nuclear is our best bet. Coal’s advantage is it kills people a few at a time. Solar, especially small scale solar, is “cute,” but not currently a real solution to the world’s energy needs.

All true. But solar scales in ways nuclear does not. PCs were cute when you first started working with them, Bill. Remember?

First, by removing items from the grid. As with these attractive Ikea lamps, with LED bulbs that power themselves from daylight. (Or, as we’ve seen before, solar chargers for your gadgets). 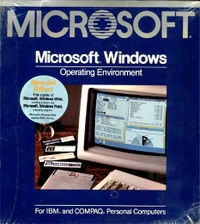 True, we’re a decade from getting all this down to the current price of coal or (once you take out the capital costs and ignore the storage of spent fuel) nuclear. Still, as Gates forgot with Windows, Moore’s Law is continuous. Once we reach cost equivalence with coal, solar costs are going to keep declining, because they are in the end just capital costs. There’s no ongoing fuel cost. Because there’s no fuel.

This is the final point Gates misses. He’s thinking of energy as something that requires fuel. As you use fuel, fuel gets more expensive.

There is no energy shortage. The Sun shines, the wind blows, the tides roll, and we live on a molten rock.

This is a new paradigm for energy. When we cease to be hunter-gatherers, when we become farmers who harvest the abundance all around us, then civilization really begins. Gates and I are living at the end of an era, the prehistory era of energy.

Our children will be farmers, the New Sumerians. Their problems will be different from ours. And it’s a shame that Gates can’t get his head around these changes, and get behind them. Because he’s missing out, just as Microsoft is missing out, on the key opportunities of our time.