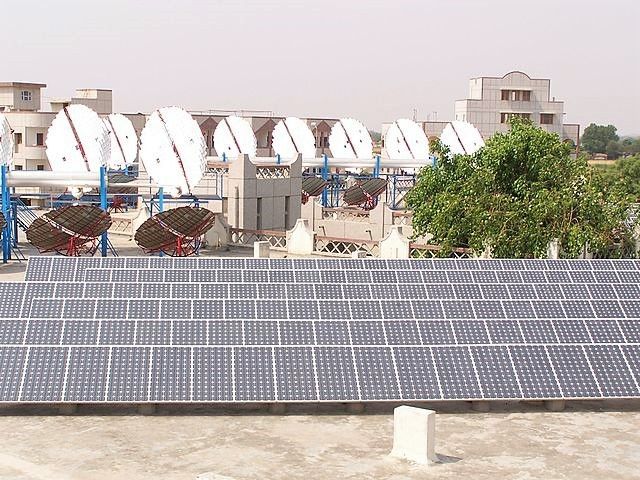 More than 190 countries committed under the Paris Agreement on climate change to hold global average temperature rise to well below 2 degrees Celsius. The multilateral development banks (MDBs) will play a crucial role in enabling countries to finance the infrastructure and energy systems of the future. While much attention has been paid recently to the MDBs as providers of climate finance, that’s only a fraction of their portfolios. The MDBs recently provided about $25–28 billion per year in climate finance by their own accounting, but they also provide hundreds of billions for everything else, including for energy supply investments.

It is therefore time to look beyond the slice represented by climate finance and examine the larger picture. It’s time to ask: To what extent are MDBs financing projects that are consistent with a low-carbon future?

We found that while only a small fraction (3 percent) of this financing is clearly misaligned with the goal of limiting temperature rise, about half of the projects fall into a “conditional” category; their alignment with a low-carbon future depends on how they’re designed and implemented, and often on the policy context in which they operate. Whether and how this is happening is an important policy discussion for MDB shareholders, MDB management and civil society.

How Do Investments Measure Up?

We categorized the World Bank’s, IFC’s and ADB’s energy supply infrastructure investments as aligned, conditional, misaligned or controversial, based on their compatibility with a range of 2 degrees Celsius warming scenarios. We found that:

32 percent of projects and 17 percent of finance are aligned with 2 degrees Celsius pathways.

These are mainly renewable energy projects, plus solutions like the storage of energy in batteries. A lot of this activity was concentrated in solar PV technology—about 15 percent of projects and 5 percent of the overall finance.

This means that these investments could be consistent with 2 degrees Celsius pathways, but only under the right conditions. Natural gas-fired power or electricity transmission and distribution (T&D) infrastructure fall into this category.

In fact, investments in electricity T&D accounted for a third of the projects and nearly half of the estimated volume of finance in our review. While well-functioning and managed T&D systems are needed to bring renewables onto the grid and increase efficiency in both the delivery and end use of energy, expanding this infrastructure to bring dirty energy onto the grid—such as coal or heavy fuel oil—without plans to decarbonize can lead to misalignment.

Natural gas power generation projects represented 7 percent of projects and 8 percent of finance. If natural gas is to be a true bridge fuel that helps reduce emissions and pave the transition to renewables, the design of the project should anticipate the future shift out of gas to zero-carbon alternatives, make deep gains in energy efficiency, and/or have a plan to incorporate carbon capture and storage (CCS).

5 percent of projects and 3 percent of finance are misaligned with 2 degrees Celsius pathways.

17 percent of projects and 22 percent of finance are “controversial.”

This means that technologies and investments were aligned in some 2 degrees Celsius scenarios, but not others, sometimes because of significant environmental and social risks. For example, large hydropower plants may produce far fewer greenhouse gas emissions than fossil fuel-based plants, but they typically require dams and flooding, which displace communities and destroy natural habitats. In addition, hydropower plants with large reservoir areas in relation to electricity production can produce considerable greenhouse gas emissions. 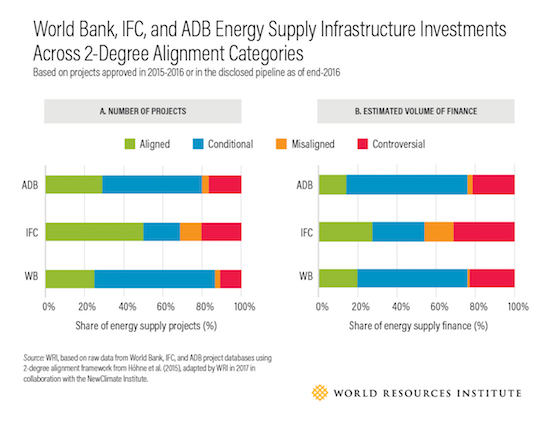 The majority of infrastructure projects considered in our analysis are 2 degrees Celsius-aligned or could be aligned if the right elements are in place. But that’s a big if—getting the project details and supportive policies and actions right will be key to achieving a low-carbon future. MDBs and countries will need to collaborate to properly design and implement these projects while ensuring they fit with countries’ decarbonization plans and enhance their ability to ramp up ambition over time.

While this is an early analysis and only a snapshot in time, it raises important policy questions for shareholders and management. MDBs, their shareholders and civil society should urgently consider how to deploy technologies that unambiguously align with 2 degrees Celsius scenarios, how to put in place the conditions that foster alignment with such scenarios, whether and how to deploy controversial energy-supply technologies, and how to manage the risk of technologies that lock in high-carbon energy for long time periods.

The MDBs will be central to helping the world finance the energy transition we need to meet the climate challenge. But that will only happen if the MDBs’ entire portfolios—not just the climate finance portions—support a low-carbon future.