Get ready — there is a revolution in residential solar going on. From financing models, solar leases, community (group buy) to owners of multi-unit housing complexes potentially becoming independent power producers, there is a changing of the business model guard. Think of it, the world may be a major storage innovation away from disconnecting from the utility grid. Do not kid yourself, there will be utility pushback but there will also be utility participation in the vein of, if you can’t beat ‘em, join ‘em.

Homeowners as well as people who do not own their own roofs or have roofs inappropriate for a PV installation can choose from various ways to buy solar electricity, all of which offer different avenues for participating in residential solar as well as potentially being highly profitable (particularly the solar lease, and residential PPA) for the companies involved in these models.  Except for the relatively simple option of buying a PV system, the other business models are relatively new and need to mature.

Buying: An option that may or may not require financing (but probably will). In many cases interest rates offered specifically for solar are higher (sometimes significantly) than other types of loans. Buyers of residential PV systems take advantage of being able to negotiate for the lowest price.  In the U.S., the average price of a residential PV installation is $4.00/kWp; with the cost in the arena $3.00/kWp including permitting (the cost can be lower depending on the cost of the hardware and the cost of permitting).  With an 8 percent interest rate (as some solar financing companies are offering) for 20 years borrowing $24,000, the total cost of the loan would be $48,000, with $24,000 in interest payments. Low interest financing options are crucial in order to continue momentum in residential PV system sales.

Leasing: An option where the lessee has a monthly payment subject to an escalation fee and has the option to buy the system at the end or before the end of the lease.  In some cases the system becomes the property of the lessee at the end of the lease.  For the leasing company, the lowest cost of hardware is required and for the lessee, the monthly payments will almost always add up to more than the system would have cost if bought for cash — of course, buying a system up front is not an option for many.  The cost of a solar lease may or may not be negotiable.  The lessor takes advantage of available incentives, including tax credits.

On the other hand, PV installations are low maintenance. Buyers interested in solar leases need to understand what their electricity costs are before committing as their usage may not justify the expense of this option.  The solar lease model is expanding; in 2013 Upsolar introduced its solar lease program in France.  Lessees pay 500 Euros for the first year for the 6-kWp to 9-kWp systems after which they have the option to buy the system or receive credit for 15 percent of the installations power.  The solar lease is encouraging larger system sizes as homeowners choose to reduce or eliminate their bills. Of course, lease payments increase by the kilowatt.

Residential PPA: An offshoot (that should have been expected) of commercial PPAs where a system is installed on the homeowner’s roof, the PPA company keeps the incentives (including tax, net metering and SRECs) and the homeowner pays a set rate for the electricity by the kilowatt hour.  Homeowners may also buy electricity up front (even twenty years of it), which is the choice preferred by most Residential PPA providers for obvious reasons. For the PPA company the lowest cost of hardware is required.

This option works best in areas with a variety of incentives.  For the buyer of electricity, obviously, the price paid for the solar electricity per kWh must be below the homeowner’s average electricity bill from the utility.  The homeowner may or may not be able to negotiate their PPA rate though, armed with knowledge (awareness of how much electricity the household uses, implementing energy efficiency measures to lower usage and being aware of the average price they pay per/kWh) would put this class of customers in a good bargaining position. This option works well for households with high electricity bills and per kilowatt hour rates and are unlikely to be economical for households with lower rates per kilowatt hour. If the home is sold the buyer will need to take over the PPA. This option would seem appropriate for apartment or condo complexes. As with the residential lease, this model tends to encourage larger system sizes.

Community (group buy) solar: As not everyone owns their own roof, has an appropriate roof for a PV system, can afford to buy or qualify for financing or qualify for a PPA or a lease, this option allows people in a community, or conceivably an apartment or condominium complex, to buy shares in a system and receive an arranged for credit on their electricity bill from the utility for the solar energy they have invested in.  For the Community Solar provider the lowest cost of hardware is required.  For the shareholder this option offers the opportunity to gain a degree of control over their electricity bill. Group buy participants likely do not get to negotiate the lowest price and pay differing prices per share.  Shares are typically transferable.

Just a few years ago, lack of net metering policies and in some countries lack of the right to interconnect rendered residential PV a nonstarter in many areas of the world. Globally, affordability and lack of available low interest financing options have traditionally been roadblocks to faster growth for the residential application.  Homeowners wanting a PV system on their roofs became system owners, that is, if incentives were in place and the homeowner could afford to buy.  Those who did not own their own roof had no good option other than paying their utility or electricity provider to buy a portion or all of their electricity from renewable sources.  The problem with this last option is that once a kilowatt is fed into the grid, it is just another kilowatt it’s the way electricity is generated in the first place that matters.

In the US continued strong growth in the solar sector continues to be incentive driven.  Focusing on the residential application, the announced end of the ITC (30% tax credit) in 2016 will hit the high margin residential solar lease and solar PPA companies directly in the profit margin. Given this reality, expectations for an aggressive push to deploy systems before the end of 2016 should be expected. Unlike the commercial application, particularly multi-megawatt or utility scale, residential deployment is faster.

Along with fragile incentives, another caveat to continued strong growth for the residential application is utility intervention, which is, blocking self-consumption in European countries by instituting fees or increasing utility rates on rate payers who do not own systems. Utilities, globally, will either choose to aggressively participate by offering leases (or some other instrument) to homeowners and selling the electricity from these systems or, they are likely to increase charges or pursue legislation.  In the US island state of Hawaii, regulations are blocking many new PV system owners from connecting to the utility grid.

Figure 2 presents growth for the global residential application and the commercial/utility owned application from 1996 through 2006. During this period the residential application grew by a compound annual 59 percent while the commercial/utility owned application grew by a compound annual 74 percent. The time frame depicted in Figure 2 includes the beginning of the residential subsidy in Japan, the 100,000 roof program in Germany and strong incentives in California.  The Feed in Tariff era in Europe began ramping up in 2004. 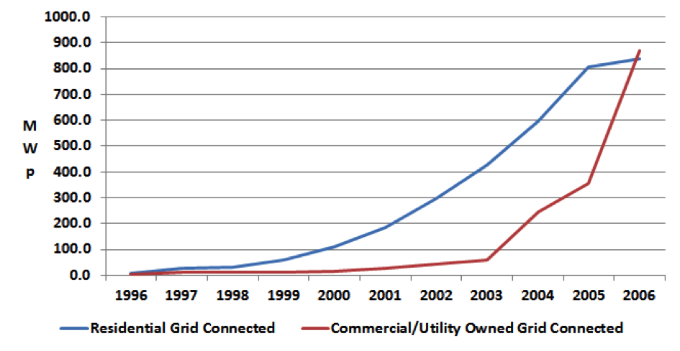 Figure 3 presents growth for the grid connection application from 2007 through 2013, years of significant growth in the PV industry. During this period the residential application grew by 47 percent while the commercial/utility applications grew by 54 percent.

During the 2007 through 2013 period depicted in Figure 3, the PV industry grew rapidly, driven by (in some cases) highly profitable FiTs in European countries.  Currently the PV industry is moving into a low to no incentive environment.  Japan’s Fit may be the final incentive of its type as the industry works to develop business models that allow for profitability as well as ensuring healthy growth in an environment where governments no longer favor incentives — at least for renewable technologies. 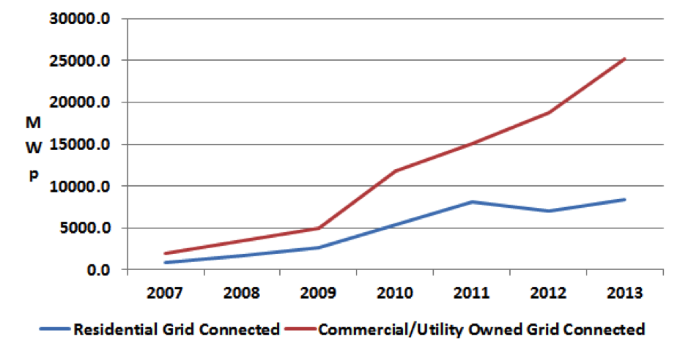 Figure 4 offers a forecast for the residential application from 2013 through 2018.  It is expected that the residential application will continue to grow at, what for any other industry, would be an enviable rate of 15 percent for the conservative scenario to 27 percent for the accelerated application. Though these growth expectations may seem low, they take into account a myriad of macro and micro economic possibilities that can ripple through home owning populations. 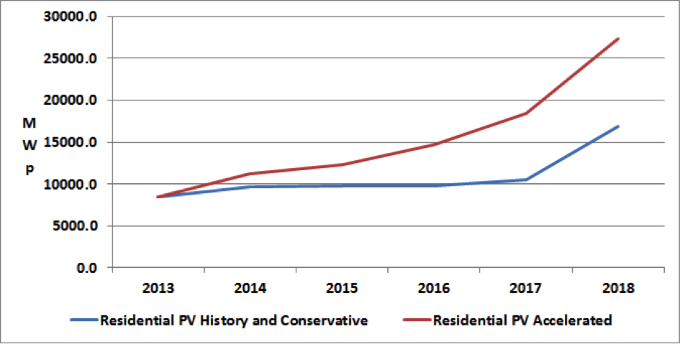 Residential application growth is vulnerable to economic downturns as well as homeowner mobility that is, in bad times homeowners may lose their homes or not be able to afford an expensive addition and in good times homeowners may not want to commit to a 25-year asset and prefer moving to a newer home.  There is not enough data currently to assess the success or failure of residential solar leases and PPAs. These models will need to mature rapidly as well as taking into account the value offered to electricity consumers.