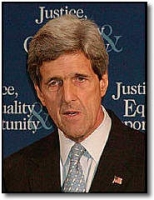 Americans spend more than $20 billion each year on oil from the Persian Gulf – often from nations that are unstable and hostile to our interests and our values. I believe that we must end this dangerous dependence because it leaves American security and the American economy vulnerable to the vagaries of international oil markets and to those who would use oil as an economic and political weapon. It is time to break with the past and build an American energy future.

RE Insider – January 26, 2004 – Reducing our dependence on oil and building a future of clean and abundant energy are urgent national priorities. Our current political leadership, however, does not treat them that way. Political support for research, development, and deployment is based on the whims of George Bush and Dick Cheney’s pals in the oil business and so is funding bottled up by the Republican dominated Congressional appropriations process. When President, I will assure that the nation is on track to reduce oil dependence by creating an Energy Security and Conservation Trust Fund capitalized by existing oil and gas royalty revenues and dedicated to accelerating the commercialization of technologies that will reduce America’s dangerous dependence on oil. I believe we need a strategy to reduce our reliance on oil now by making incentives for industry and American citizens to use more efficient automobiles and that we should start today to develop the hydrogen-based energy economy of tomorrow. Renewable energy will diversify our electricity supply, ease price shocks and help protect our environment. And together these abundant renewable energy sources can build the backbone for the development of a long-term hydrogen economy. I believe that America needs a national market for electricity produced from renewable energy, such as wind, solar, biomass, geothermal and hydrogen. I support a national goal of producing 20 percent of our electricity from renewable sources by 2020. States have shown that we can significantly increase renewable energy sources. Texas is on track to reach its renewable target by 2004 instead of the proposed year of 2009 and California derives 13 percent of its electricity from renewable energy. The tremendous disparity in state renewable energy programs, however, illustrates the need for a national renewable electricity standard. This standard will encourage the market to respond by finding the most efficient and effective way of meeting that goal through a credit trading system. Investing in energy efficiency and renewable energy will create hundreds of thousands of quality jobs. Clean energy technology will be designed, developed and built here in America and exported to the world. Investment in more efficient transportation, such as commuter and intercity rail, will create jobs in manufacturing, construction and operations. The development of wind, geothermal, hydrogen, solar power and other renewable energy will create jobs in manufacturing and building. Biomass development will create jobs in construction, refining and distribution. And investment in energy efficient buildings will create jobs in retrofitting existing building stock. The Tellus Institute predicts that federal policies – including many in our plan – to bolster clean energy will create more than 700,000 jobs by 2010 and 1.3 million jobs by 2020. Hydrogen has great promise as a clean, domestic, and reliable energy source for the future. It has the potential to power our cars at 100 miles per gallon without pollution and, with the right technology, can be produced efficiently from natural gas and coal. Eventually, I believe that we can build a truly clean and secure economy based on hydrogen – a clean fuel that we can eventually get entirely from renewable sources from our farms, the wind, solar energy, hydropower and geothermal sources. About the author… John Kerry was born on December 11, 1943. He attended Yale University and volunteered for the US Navy upon graduation. He served with distinction in Vietnam. By the time Senator Kerry returned home from Vietnam, he felt compelled to question the legitimacy of the continuing conflict. Kerry was a co-founder of the Vietnam Veterans of America and became a spokesperson for the Vietnam Veterans against the War. Kerry was elected Lt. Governor of Massachusetts in 1982 and elected to the US Senate in 1984. John Kerry is now running for President of the United States.