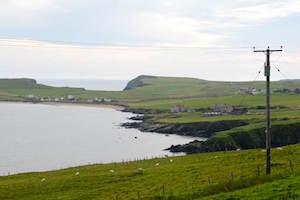 A five-year trial on Scotland’s Shetland Islands has shown that a system of demand-side management, large-scale energy storage and monitoring and control systems — together called active network management (ANM) — has allowed the addition of about 8.5 MW of renewables to the islands’ grid.

“By creating flexible demand on the islands, through the use of smart technology and energy storage, we have made progress in exploiting and maximizing Shetland’s renewable generation potential and reducing the generated output from thermal power stations,” Stewart Reid, head of asset management and innovation at SSEN, said in a statement. “This was an important achievement as it will inform the transition to a low carbon economy. It also offered us the opportunity to trial the technology in an environment which could then be applied to the wider-Great Britain electricity network.”

According to SSEN, a 1-MW/3-MWh battery at the Lerwick Power Station was used to help provide a stable electricity network and to reduce demand peaks. The battery worked in collaboration with the ANM system, which identifies when energy demand is high and what available energy there is in storage, and balances the network when there is low demand and excess renewable power.

SSEN said it is sharing the project findings with the wider energy industry to support the electricity industry’s transition from a distribution network operator to a distribution system operator role.