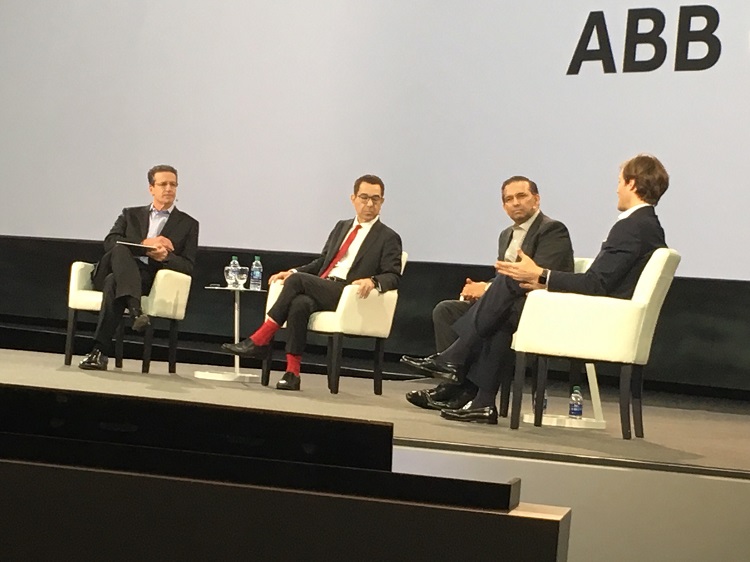 HOUSTON-Those commuters racing in their pickup trucks or SUVs down nearly I-10 may not know it yet, but Tony Seba is convincing when he says that their world is getting ready to change big-time. EVs are gaining on them and fast.

As a futurist speaking in Wednesday’s keynote at the ABB Customer World event, Seba predicted a tidal wave of electric and autonomous vehicle adoption in the coming years. He made bold forecasts because, well that’s what futurists do, but also because he sees the same S-curve of innovation, adoption and ultimate ubiquity that has characterized every major and successful technological leap, whether it’s smartphones or even the original automobiles 100 years ago.

“Car adoption went from 11 percent to 80 percent in the 10 years (into the 1920s), Seba told the crowd at the George Brown Convention Center in downtown Houston. “If anyone tells you that the disruption in transportation cannot happen in 10 years, they are not looking at the evidence.”

His point was that so-called experts and mainstream analysts often never see the next big thing coming. The experts in Wednesday’s morning panel were not disputing the potential for an S-curve-style EV revolution, but on the challenges facing this predicted shift from internal combustion engines owned mainly by their drivers to electric vehicles owned by a service provider and driven by the machine itself.

Only time will tell whether this is right, but EV adoption is clearly rising both on the individual and fleet fronts. Utilities such as Southern California Edison and Ameren, among many others, are working to build EV charging infrastructure and align power distribution in a way to handle it.

Outside the utility circle, Volkswagen started Electrify America, which is partnering with other companies-including ABB-to begin building a charging station network nationwide. To relieve range anxiety, EVs need a well-spaced and complete chain of charging stations across many states, but also needs the utility to help with the transformers and other expensive concessions. And those utilities need regulators along for the ride on issues such as cost recovery for those projects.

Tarak Mehta, president of the electrification products division at ABB, noted his company’s work on EV infrastructure and autonomous vehicles in Singapore. ABB is working with Volvo Buses and Nanyang Technological University to deliver chargers for two autonomous driving electric buses this year and supplying some 500 charging points across the nation by 2020.

“We’re seeing an evolution beyond the buses,” when it comes to electrification and automation, Mehta said. “We’re working with ships, fairies.”

The momentum growing even in the U.S. is based on changing economic and cultural realities, Seba said. An internal combustion SUV can cost some $15,000 in fuel over five years and has some 2,000 moving parts, while an EV might cost $1,500 to charge and has a fraction of the moving parts. And many of today’s young people are less interested in driving, much less owning and maintaining a vehicle that is perceived as damaging the environment.

Overlapping and infusing all of this EV future is more than electrons. The common denominator, whether it’s vehicle operations or the charging infrastructure or even the grid reliability efforts, is digitization.

“That’s why digital is important: it helps us create and deliver more value to you,” Guido Jouret, chief digital officer at ABB, chimed near the end of the mobility panel at ABB Customer World. “It’s like adding a nervous system to muscle and bone.”