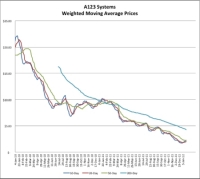 On Friday A123 Systems (AONE) announced a direct registered offering that’s an elegant example of a well-structured financing transaction in a difficult market. A123 had a solid financial base before the offering and the stock was starting to turn a critical corner into an upward trend. The new financing should add momentum to that trend.

The first stage deal terms are pretty straightforward. The investors will buy units consisting of one share of common stock and one common stock purchase warrant for $2.034 per unit, a 10% discount from the closing price of A123’s common stock on Thursday. The warrants will be exercisable at $2.71 per share, a 20% premium to Thursday’s close, during the 24-month period beginning six months after the closing date. The net proceeds will be approximately $23.5 million after costs and expenses.

An elegant second stage gives A123 the right to require the investors to buy up to 12.5 million additional shares next summer at a 10% discount to the 10-day average market price if A123 calls on the standby commitment and exercises what’s effectively a put option. The only substantive limitation on A123’s right to require the investors to buy additional shares is that they can’t be required to invest more than $100 million, or $8 per share, in the second stage.

The thing I find most fascinating about the transaction is the tension between A123’s current sacrifice and the investors’ longer-term commitment.

Last April I wrote that the market over-reacted to an attractive financing transaction and A123’s stock was undervalued in the $6 range. The market disagreed with my conclusion and over the next eight months A123’s stock price crumbled to an all time low of $1.51 in mid-December before turning to the upside. At Thursday’s close, A123 was trading at a 19% discount to its September 30th book value of $2.80 per share. That makes a sale of additional shares at a 10% discount to market painful because the new investors will enjoy a modest accretion to book value while the existing stockholders will suffer a slight dilution, as summarized in the following table.

When you factor in 100% warrant coverage at a 20% premium to Thursday’s close, the first stage terms are attractive for the new investors. The second stage terms, however, are very attractive for A123 because they give the company six months to execute on its business plan and require the investors to standby with up to $100 million of additional financing if A123 decides it wants the money. The standby commitment may not be needed, in which case A123 will have no duty to sell the additional shares, but it sure is nice to have a second stage transaction locked, loaded and ready to go if more money is needed.

Earlier this month I picked A123 as a break out stock for 2012. As the following graph shows, A123’s 10- and 20-day moving averages have turned up nicely and a simple reversion to the 200-day moving average would suggest a value in the $4.25 range as the stock reverts to a mean. 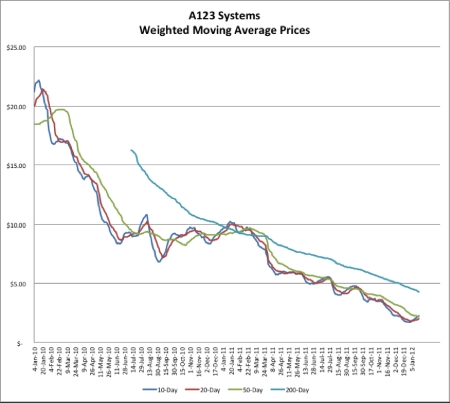 Since stocks that are significantly undervalued tend to over-correct as they revert to the mean, I would not view a six- to twelve-month target in the $6 range as unreasonable.

Like all battery technology developers, A123 faces a myriad of execution, market acceptance and business risks that each investor will have to assess in light of his own expectations and risk tolerance. It is, however, the clear sector leader in the lithium-ion battery space and likely to significantly outperform the market this year.