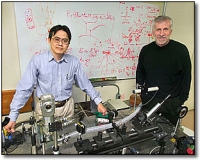 Besides cost, the most fundamental issue in assessing photovoltaic solar cells is efficiency – how much of the sunlight that falls on the cell can it convert to electricity? For the second time in two years, Kin Man Yu and Wladek Walukiewicz of the Materials Sciences Division, working with colleagues from Berkeley Lab and other institutions, have announced a new solar cell material that may be able to achieve extraordinary efficiency. In every other way these discoveries are different, however.

Berkeley, California – April 9, 2004 [SolarAccess.com] The only thing the two materials have in common,” says Yu, “is that they both try to capture as much of the solar spectrum as possible.” In 2002, the researchers learned that indium gallium nitride (InGaN) would respond to different wavelengths of light if the proportions of indium and gallium in the alloy were adjusted. Thus it might be possible to create a photovoltaic cell sensitive to the full solar spectrum by stacking multiple negatively and positively doped layers to form several current-producing junctions. In their latest discovery – what Yu calls “a totally new material concept”, the researchers treat the alloy zinc manganese tellurium (ZnMnTe) in such a way that a single junction of the material may be able to respond to virtually the entire solar spectrum. “This isn’t a multijunction material,” says Walukiewicz, “it’s even more interesting: a multigap material” – a single semiconductor with multiple band gaps. A solar cell with the simplest possible physical structure could achieve 50 percent efficiency or better, far higher than any yet demonstrated in the laboratory. How solar cells work Sunlight comes in many colors, combining low-energy infrared photons with high-energy ultraviolet photons and all the visible-light photons between. Each photovoltaic material responds to a narrow range of these energies, corresponding to its characteristic band gap. The band gap is the amount of energy, expressed in electron volts (eV), required to kick an electron from a semiconductor’s valence band, which is chock full of electrons bound to atoms, into its empty conduction band, where electrons are free to move. (The bands are graphical representations, not physical spaces.) If the semiconductor is doped with impurity atoms to form an n-type, electrically negative material, it already has a few electrons in the conduction band; conversely p-type (positive) material has been doped to leave missing electrons, or holes, in the valence band. A junction between n- and p-type creates a voltage bias; when incoming photons are absorbed, electrons migrate toward the positive side of the junction and holes toward the negative side, forming an electric current. Photons with energy lower than the band gap escape unabsorbed; photons with higher energy are absorbed, but most of their energy is wasted as heat. Crystalline silicon, the leading solar cell material, has a band gap of only about 1.1 eV; most solar photons are much more energetic. Crystalline-silicon solar cells are about 25 percent efficient at best.

In the material of a photovoltaic cell, incoming photons free electrons of corresponding energy, which migrate toward the positive side of the junction, forming an electric current. Different materials with different band gaps can be stacked to capture photons with a wider range of energies, however. In a multijunction solar cell, the top junction captures high-energy photons, while others pass through to the lower-band-gap junctions below. If aluminum gallium arsenide, which has a band gap of about 1.7 eV, could be layered with crystalline silicon, the resultant cell would be 50 percent efficient. Unfortunately these materials can’t be stacked; matching materials with different crystal lattices is difficult and often impossible. The most efficient multijunction cells yet made are two-junction cells with about 30 percent efficiency. The advantage of indium gallium nitride, the first material the Berkeley Lab researchers proposed for a full-spectrum solar cell, is that the crystal lattice of all the different layers is the same. Because the material is inherently radiation hard, research continues on InGaN for satellite applications, although it has proved difficult to make a practical p-type version of the material. Discovering the multigap phenomenon “The concept of multiband cells goes back to solar-cell pioneer Martin Wolf, who proposed the impurity photovoltaic effect in 1960,” says Walukiewicz. “The idea was that by introducing impurities with the right electronic properties into a semiconductor you could make a single-junction solar cell that absorbs more photons with different energies. Sounds easy, but nobody knew how to do it.” But in 1999, Walukiewicz and others at Berkeley Lab were working with solar-cell designers at DOE’s National Renewable Energy Laboratory, who were trying to build a three-junction cell. The NREL researchers inadvertently created the first photovoltaic semiconductor with a split band gap. But at first they didn’t realize it. “They needed a new material with a 1-eV band gap and a crystal lattice structure that matched the other layers of the cell,” Walukiewicz explains. “They used gallium indium arsenide nitride alloys in which just a little nitrogen could achieve the desired band gap, and an almost perfect lattice match.” Since the band-gap reduction was unexpected, Walukiewicz set out to find out how it worked. The answer, it developed, was that the few atoms of nitrogen, which are much more electronegative than the host atoms (much more strongly attractive to electrons) produced a narrow energy band of their own, splitting the GaInAs conduction band into two parts. The gap to the lower of the two conduction bands was the desired 1 eV. In the case of GaInAs, other characteristics of the split bands made for a poor solar cell material. Nevertheless, Walukiewicz and his colleagues continued to investigate the phenomenon and developed a model of the split-band phenomenon known as “band anticrossing.” A perfect mismatch A so-called highly mismatched alloy results when a few of the host atoms of a semiconductor alloy in the III-V group, like GaInAs, are replaced with nitrogen atoms having very different electronegativity. (The Roman numerals refer to the columns in the periodic table in which the constituent elements are found.) Replacing atoms in the II-VI group of alloys with oxygen, also highly electronegative, produces highly mismatched alloys as well. Split band gaps account for the electronic peculiarities of highly mismatched alloys. As with GaInAs, in most cases the split occurs inside the conduction band, with results that are of not much use in solar cells. In some materials, however, the band-anticrossing model predicts that the impurity atoms will produce a narrow band well below the conduction band. One such prediction was that adding oxygen impurities to the II-VI alloy zinc manganese tellurium, ZnMnTe, would produce well defined and widely split band gaps. “Figuring out how to do this was not easy,” Yu says. “It was important that the oxygen atoms be distributed evenly throughout the material. To trap enough oxygen ions you have to do it with the material in the liquid state and very fast. You can’t just heat the material slowly, because the oxygen is rapidly driven out.” Walukiewicz adds, “That’s why they’re called highly mismatched alloys – because the impurity atoms and the host atoms don’t like each other.” Yu says, “We did it in two stages: first we used ion beams to implant the oxygen, then we used pulsed laser melting to liquefy the ZnMnTe and recrystallize it rapidly. The whole laser process takes just a couple of hundred nanoseconds,” a couple of hundred billionths of a second. In this way the researchers were able to create single crystals of ZnMnTe whose top layer – only 0.2 micrometers thick (a micrometer is a millionth of a meter)held enough oxygen impurity atoms to split the normal band gap. A deck of energy levels How can a split band gap convert a wide swath of the solar spectrum to electricity? Because two separate bands means the material efficiently absorbs photons of three different energies. The difference between the material’s valence band and the lower of the split bands forms one band gap. In ZnMnTe incorporating oxygen impurities (written ZnMnOTe), this first gap absorbs 1.8 eV photons. The difference between the two split bands is a second band gap; in ZnMnOTe, this gap absorbs 0.7 eV photons. Finally, the difference between the valence band and the upper conducting band forms a third band gap; in ZnMnOTe, this gap absorbs 2.6 eV photons.

In a multilayer solar cell (left), each layer is a different alloy with a different band gap, which responds to a different frequency of sunlight. A multigap solar cell has only a single layer of material, but multiple band gaps allow it to respond to a range of different frequencies. Together, these three gaps respond to virtually the entire solar spectrum. The calculated efficiency of a single-junction solar cell made with this material would be a remarkable 57 percent. But while the single-junction architecture is elegantly simple, many questions have to be answered before ZnMnOTe or any of its highly mismatched cousins prove they can do the job. Making p-type and n-type versions of the split-band material does not appear to pose a problem. But the tricky process of ion implantation followed by pulsed laser melting is no way to manufacture semiconductors in bulk. And the oxygen-implanted layer must be at least 0.5 micrometer thick if the material is to absorb all the solar photons falling on it – more than twice the 0.2-micrometer thickness achieved so far. Yu admits that forming highly mismatched alloys is “challenging from a crystal-growth point of view,” but there is hope that crystals can be grown epitaxially (the growth on a crystalline substrate of a crystalline substance that mimics the orientation of the substrate). One good sign, he says, is that Japanese researchers have already grown thick oxygen-doped crystals of a related material, zinc selenium. In the meantime, the Berkeley Lab researchers have teamed with Piotr Becla of MIT to manufacture a single junction of the material which gives a photovoltaic response. With it they have demonstrated the kind of three-band semiconductor needed for high-efficiency, single-junction solar cells. There are many possible ways of varying the composition of these alloys to get the desired result – so many that eventual success seems as highly likely as the alloys are highly mismatched. For more information see the links below…