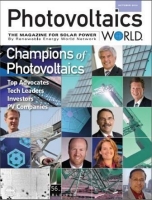 In the special “Champions” issue of Photovoltaics World, we honor those advocates, technologists, investors and companies that have made clean energy possible through the use of solar power produced by photovoltaics. Editor-in-chief Pete Singer discusses the state of the solar industry today.

(October 7, 2010) — In this special issue of Photovoltaics World, we honor those advocates, technologists, investors and companies that have made clean energy possible through the use of solar power produced by photovoltaics.

We set out on our mission back in February 2010 with the idea that we would identify some of today’s solar thought leaders. We sent out a call for nominations, nominated a few of our own choices, collected information, and compiled as much as we could into this issue, which you can browse using the links to the left, or on our Champions of Photovoltaics page.

Of course, in any contest such as this, it is possible to recognize only a relatively few individuals and companies. Around the world, there are tens of thousands of people and thousands of companies that are involved at some level with the implementation of solar power — all are PV champions in my book. The German PV industry alone has created over 10,000 jobs in production, distribution, and installation.

The great news is that PV production has been increasing by an average of more than 20% each year since 2002. This makes it the world’s fastest-growing energy technology. At the end of 2009, the cumulative global PV installations surpassed 21GW. Germany installed a record 3.8GW of solar PV in 2009. Roughly 90% of this generating capacity

World solar photovoltaic (PV) installations were 2.83GW in 2007, and 5.95GW in 2008, a 110% increase. The three leading countries (Germany, Japan and the US) represent nearly 89% of the total worldwide PV installed capacity, but – more good news – the increased affordability

of PV has made it a viable power generating option in many areas of the developing world. Indeed, sometimes the only option.

So, while we can only recognize a limited number in this issue, we will carry on our website and into the future. Please check out http://www.electroiq.com/index/photovoltaics/pv-champions.html for more champions and additional information.