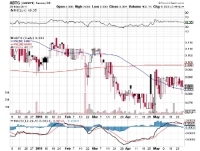 Based solely on its deal with Duke, Ambient became profitable in the last quarter of 2010, and gained more ground in Q1 2011.  Yet as readers following the American Superconductor (AMSC)/Sinovel (601558.SS) saga know, over-reliance on a single customer can be very dangerous.  You can’t get much more reliant on a single customer than Ambient is on Duke.

That said, Duke Energy is not a hyper-competitive Chinese wind company with investments in any of the company’s competitors.  They are a regulated utility, and, as such, their moves are more transparent and conservative rather than the enigmatic and abrupt.  Major changes in Duke’s strategy come out of the regulatory process, and are part of the public record.  Regulators also tend to prefer a go-slow approach, which means client acquisition for companies like Ambient is slow and painful, but also that their clients are less prone to fund competitors and start refusing deliveries with little warning.

There are advantages to having Duke as a customer as well.  Duke has been a leader in smart grid deployment, and given the conservative nature of utilities, if a smart grid solution is seen to work well for Duke, other utilities will be more likely to adopt it than to opt for a technology that has not yet been widely deployed.  One potential market expansion may come from Duke’s merger with the smaller Progress Energy.  But there is also the risk that Duke might switch to the technology from Progress energy’s own smart grid project.  Overall, though, I think the merger will be good for Ambient, since their interoperability makes them a natural choice for a merging company trying to consolidate two systems.

The single customer is the main reason to be wary of Ambient stock.  The reasons to be optimistic include the company’s current profitability, strong balance sheet, and plans to aim for a NASDAQ listing.  The company’s major shareholder, Vicis Capital, has given Ambient’s board permission to conduct a reverse stock split to boost the company’s current $0.08-$0.09 share price over the $4 threshold needed for a listing.

The company is also working to raise their profile by retaining a PR firm, Elevate Communications of Boston.  I’m not sure when the firm was retained, but I received my first press release from them when Ambient released their 2010 results in February.  They contacted me again last week, although they did not respond when I requested an interview with the CEO in preparation for this article. I mainly wanted to ask him about their prospects for finding other customers, and why nothing has come of the R&D effort with ConEd in 2007.  Assessing why past potential deals did not materialize might give some insight into Ambient’s future prospects.

That said, the fact that Ambient only has one customer is old news.

What’s new news is that the one customer has become lucrative enough to push Ambient into profitability.  I’m not sure how much of the current profitability is due to stimulus-related smart grid spending by Duke, but I trust that it will likely continue for a few more quarters, if only because Ambient does not seem to be in a hurry to complete their reverse split and get listed.  So I’m betting that there will be at least a few more good quarters to get investors excited and give a quick return to those who get in now.

Other investors seem to think so, too.  The stock price found a bottom around $0.075 and started moving upwards since the positive Q1 earnings and revenue numbers.

I think Ambient is worth speculating on at the current $0.09 stock price.  If they manage to find another big customer soon, I’d consider them a good long term buy, but as it is I’m more comfortable holding for less than a year to take advantage of the currently growing profitability and potential listing.