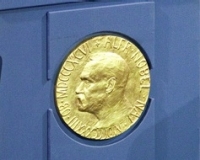 Kerala, India — President Obama’s Nobel Peace Prize was conferred in anticipation of the future good he would do more than for deeds he had already accomplished. Can there not be a Nobel Prize in physics and chemistry prospectively announced for scientists who achieve a breakthrough in solar energy or storage technologies in the next five years? A Nobel is an incentive all by itself, even if such breakthroughs would bring with them their own commercial rewards.

What better way to raise awareness of the issues surrounding depleting oil and global warming, and the role our oil- and coal-driven economy plays in both than to create the buzz of a Nobel Prize? I cannot think of a more urgent, global need than weaning away from the hydro-carbon economy and yet even Al Gore, a U.S. Vice President, made only a small dent in public awareness.

Not since the Manhattan project (that gave the world the atom bomb) has there been a moment of glory waiting for physicists, chemists, inventors, and engineers. If the solar conversion efficiency jumped by say 30%, and reliable, inexpensive electricity storage solutions were found by nurturing the Bells, Curies, Edisons, and Einsteins, there would cause for worldwide celebrations.

These lines from T.S. Eliot‘s poem The Hollow Men point to the angst experienced by devotees of renewable energy. Why not now; and if not now, when will the industry come to life and take off?

Every light left on in an empty room, idling automobile, high-rise over air-conditioned building, inefficient home heater, and the perennial small light of home appliances … to name a few signs of daily living – all of these are symbols of invisible and remote coal-fired power plants, diminishing carbon sinks, and climate change. What shadow falls between the recognition of the need for a sustainable lifestyle and its realization?

Three major shadows need to be shown the light.

Awareness Gap for Behavior Change: While newspaper coverage of articles on the subject of renewables is rising, intelligent discussion on the subject on TV, in popular magazines, and by celebrities is absent. Carbon dioxide needs more human visibility.

The issues are too important to be left to scientists, UN bodies, and acronym makers. We require spokespersons who can, in common language, address issues of carbon trading, post “peak oil,” the implications of Copenhagen and Cancun, LEED certified buildings and efficiency-rated appliances.

I have hope that we will get there because of this: if the world has learned about “Control, Alt, Delete” and the C: drive of the Windows operating system, global warming is manageable.

Ownership Vacuum or Opportunity in Industry Structure: In most businesses, existing assets, skills, or knowledge typically positions one group to lead the emergence of a new industry. For example, scientists in biotechnology are in the best position to come up with new drugs, and computer scientists and telecommunications researchers address IT and networking issues.

The experts own the problem and its solution. If they are not in a position to commit resources for getting regulatory approvals or reach the market, they partner with larger corporations and form strategic alliances.

In renewable energy, there are neither clear owners of the problem nor “natural” eventual owners of the solution. The renewable ecosystem supports many prospects. It may be erroneous to assume that the electricity industry of today will be owners of electricity provisioning of the future. An existing coal-based power producer may or may not be successful in the integration necessary to realize renewable power.

Other business models such as community power plants, off-grid solutions, islanded power for campuses, and distributed generation, may end up being the dominant solutions. A community may decide to be partially or totally “off-grid” by investing in its own generation and local distribution – a co-operative model.

On the other hand, a manufacturer of mechanical equipment for tracking may end up being the leader who pulls together the panel makers and solar cell manufacturers. A solar installation company may move up the value chain to own panel-making, even silicon manufacture, and vice versa.

This absence of a clear industry driver hurts the industry in the short run.

Of course, in the absence of a scientific breakthrough, the economic model is barely tenable too. Only generous feed-in tariffs, reflective of public leadership, support the fledgling efforts the world over.

President Obama’s support for DOE labs and research deserves praise as does India’s recent efforts at the Ministry of New and Renewable Energy, European leadership in wind energy and feed-in tariffs, and the Chinese push for energy savings and its creation of a solar cells and panels industry — good public policy leads to good market and business policy.

In the long run, this absence of a clear “owner” in the emerging renewables industry may be, I suspect, fortuitous in finding an answer for the future because the field is wide open, a free-for-all.

Technical Gap: All other gaps – of industry structure, awareness and education, public policy and business divide – are manageable, but it is the technical gap that stops us from re-constituting the world to our hearts’ desires.

And it is here that a break in norms may be called for at the Nobel Committee level – announce a prize in the physics and chemistry of renewables in advance. The resulting publicity will highlight the urgency of the issues and serve us all well.

Mahesh P. Bhave is visiting professor of strategy at the Indian Institute of Management (IIM), Kozhikode. He may be reached at mahesh@iimk.ac.in.