When the Texas oil industry finally saw the big opportunity in wind and became obsessed with developing it, Austin Energy started pushing for the city to put more of the intense Texas sun to work.

While energy-rich Texans have obliviously indulged in spreading suburbs and unconstrained air conditioning, Austin Energy has been at the forefront of the U.S. environmental community’s clamor for more energy efficient homes, buildings and city planning.

While everybody else was still crying over who killed the electric car, Austin Energy started Plug-In Partners, a movement that organized cities all over the country to promise to buy plug-in hybrid electric cars for their fleets. The tens of thousands of fleet sales guaranteed by Plug-In Partners were at the heart of the drive by major car builders like GM and Nissan to build the battery-electric vehicles that are due in showrooms this fall.

In response, Austin Energy has now released Austin Energy Resource, Generation, and Climate Protection Plan to 2020, its far-seeing vision and concrete plans to make Austin sustainable for its three-quarters of a million citizens. ::continue:: 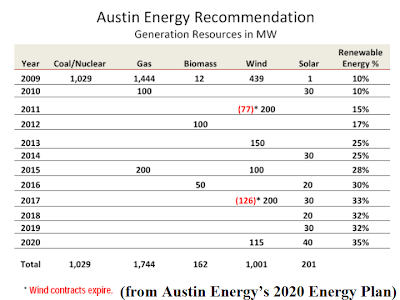 At the heart of the plan are 3 pillars: (1) More New Energy, (2) more Energy Efficiency and (3) the shifting of the utility’s peak load to off-peak hours.

Changes/additions to present resourcing goals for 2020:

(3) The solar portion of Austin Energy’s New Energy power increased from 100 megawatts to 200 megawatts; and

The report reveals that unlike the vast majority of U.S. utilities, Austin Energy sees its responsibility is not just to keep the city’s lights on but to do so in a clean, affordable and reliable way and to provide its bosses, the people of Austin, with excellent service while doing so.

There are a lot of fossil-foolish and radioactive utility CEOs around the so-called civilized world who need to read this report and see what is possible. 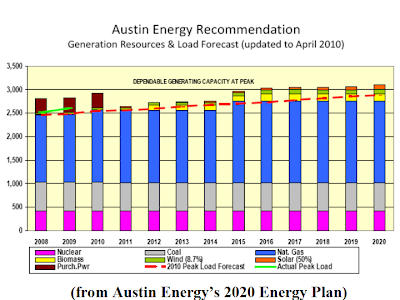 This post is based on Austin Energy Resource, Generation, and Climate Protection Plan to 2020 (April 22, 2010, Austin Energy)