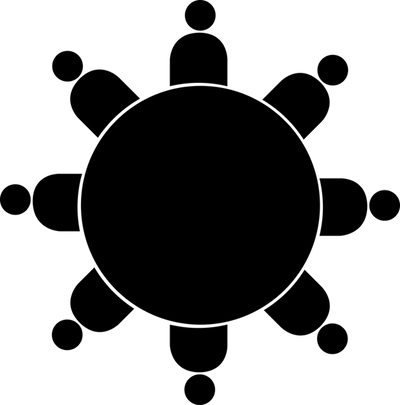 While all countries committed under the Paris Agreement to limit global temperature rise to 1.5˚C-2˚C (2.7-3.6˚ F), major questions remained: How can the world achieve this temperature goal? And what happens if it doesn’t?

The world’s leading climate scientists, the Intergovernmental Panel on Climate Change (IPCC), answered these questions and more in their latest report released last week. Nearly 100 scientists analyzed how the world can achieve the 1.5˚C goal, as well as impacts associated with this rise in temperature.

Global emissions were roughly 52 GtCO2e in 2016, and are projected to be 52-58 GtCO2e by 2030. Annual emissions need to be about half that (25-30 GtCO2e/yr on average) by 2030 to limit warming to 1.5˚C (with no or low overshoot). While it’s still technically feasible to avoid a 1.5˚C rise in temperature, behavior and technologies will need to shift across the board in order to achieve these emissions reductions. For example, by 2050, renewables are projected to supply 70-85 percent of electricity in 1.5˚C pathways. Energy efficiency and fuel-switching measures will be critical for the transportation sector.  Reducing energy demand and improving the efficiency of food production, changing dietary choices and reducing food loss and waste also have significant potential to reduce emissions. 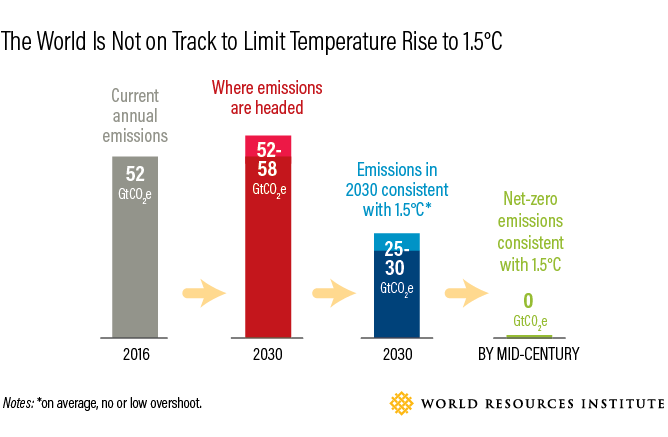 The report also highlights how ambitious climate action brings many benefits for shared prosperity and economic stability — more jobs, increased energy access, access to sustainable transportation and health improvements, to name a few. There are also important trade-offs in the case of poorly designed policy. And while not cited in the IPCC report, new analysis by the New Climate Economy found that bold climate action can deliver $26 trillion in economic benefits through 2030 (compared with business-as-usual) while generating more than 65 million jobs and avoiding more than 700,000 premature deaths from air pollution in 2030.

2. The scale of the required low-carbon transition is unprecedented.

While there have been examples of rapid change in specific technologies or sectors in the past, there is no precedent in our documented history for the rate of change at the scale required for limiting warming to 1.5˚C. In other words, we have never before witnessed such widespread, rapid transitions, and they will need to be made across energy, land, industrial, urban and other systems, as well as across technologies and geographies.

The majority (81 out of 90) of the modeling scenarios for limiting warming to 1.5˚C exceed this temperature threshold before dropping back down. The results of these scenarios are very different from those that never overshoot 1.5˚C. For example, consider the impacts of warming on a fragile ecosystem: If the 1.5˚C goal is exceeded for many years at a significantly higher temperature, irreversible impacts, such as species extinction, may result even if warming is eventually brought down to 1.5˚C.

The impacts of 1.5˚C of warming will also depend on the chosen emissions-reduction activities. For example, a more rapid reduction of black carbon can help stem the loss of snow and ice in the Arctic.

The report finds that significant climate impacts already occur at 1.5˚C, especially in regards to low-lying areas, human health and oceans. The impacts will hit the poor and most vulnerable the hardest due to loss of livelihoods, food insecurity, population displacement, health effects and more.

5. …but risks associated with warming are substantially lower at 1.5˚C than 2˚C.

Because the Paris Agreement specifies that countries should “limit warming to well below 2˚C, and pursue efforts to limit it to 1.5˚C,” the IPCC report takes stock of how much higher the risks of a 2˚C world are than 1.5˚C.  For example, under 1.5°C of warming, the report finds it is very likely to have one sea-ice-free summer every 100 years; at 2°C, the frequency increases to at least one every 10 years.

6. Emissions will need to reach net-zero around mid-century.

In addition to large emissions cuts in the next decade, net CO2 emissions will on average need to be reduced to zero by mid-century.  If the date of reaching net-zero emissions is brought forward one decade to 2040—fewer than 25 years away—the chance of limiting warming to 1.5˚C is considerably higher. The sooner emissions peak before 2030 and the lower the level at which they do so, the less daunting the challenges will be.

All pollutants leading to climate change must be addressed. The report notes the critical role of short-lived but highly potent climate pollutants, such as methane and hydrofluorocarbons (HFCs). While carbon dioxide dominates long-term warming, reduction of other pollutants can contribute to the 1.5˚C goal in the short term, with substantial co-benefits, such as reducing air pollution.

7. All 1.5˚C emissions pathways rely upon carbon removal to some extent.

The report shows clearly that we will need to focus efforts not only on reducing emissions, but also removing and storing carbon from the atmosphere. Carbon removal is necessary for both moving to net-zero emissions and for producing net-negative emissions to compensate for any overshoot of 1.5˚C. The pathways studied in the report rely on different levels of carbon removal (ranging from 100-1,000 GtCO2 over the 21st century for scenarios with limited or no overshoot), but all rely on it to some extent. The report notes that carbon removal deployed at such a scale is unproven, and is a major risk to our ability to limit warming to 1.5˚C.The report also notes that feasibility and sustainability of carbon removal could be enhanced if a portfolio of carbon-removal approaches is pursued.

8. Everyone – countries, cities, the private sector, individuals — will need to strengthen their action, without delay.

Without transformation in society and rapid implementation of ambitious emissions cuts, limiting warming to 1.5˚C while achieving sustainable development will be exceedingly difficult, if not impossible. Even if countries fulfill their current national climate goals and make deep emissions cuts after 2030, warming would still very likely exceed 1.5˚C, given the challenges associated with dropping emissions to net-zero well before 2045. Therefore, all countries and non-state actors will need to strengthen their contributions without delay. The COP decision at Paris requested countries to submit a next set of climate commitments by 2020, so this is an important opportunity to take bolder action. At the Global Climate Action Summit last month, leaders from states and regions, cities, businesses and civil society reinforced that messaging, calling on countries to “step up ambition” and commit to strengthening their national climate plans during the UN climate summit this December in Katowice, Poland.

There’s no sugarcoating it: Keeping warming to 1.5˚C will be hard. Really hard. But the IPCC report also makes it clear that the world has the scientific understanding, the technological capacity and the financial means to tackle climate change. Now what we need is the political will to precipitate the unprecedented concerted actions necessary to stabilize temperature rise below 1.5 C.

There are substantial economic and development benefits from bold climate action. And even more importantly, limiting global warming to 1.5˚ is imperative. Falling short would lock in climate impacts so catastrophic our world would be unrecognizable. Governments, businesses and others have the clarity they need. Now it’s time for them to step up to the challenge.

This article was first published by the World Resources Institute and was reprinted with permission.

Kelly Levin is a senior associate with WRI’s global climate program. She focuses her work on supporting countries in the design and tracking of climate commitments, as well as planning for long-term transitions associated with decarbonization. Kelly closely follows the negotiations under the UN Framework Convention on Climate Change, and analyzes related emissions reduction commitments. Kelly also plays a leading role in WRI on communicating climate science developments.