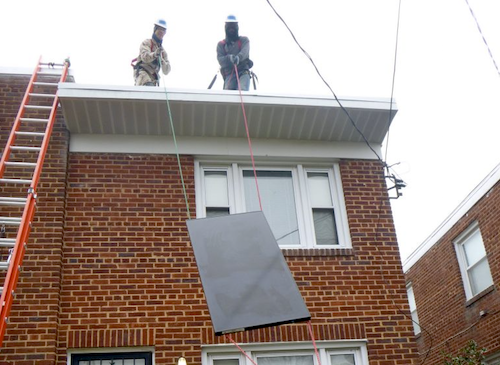 In October, Environment America Research & Policy Center showcased Shining Rewards, a new review of 16 value-of-solar studies from around the country. The report shows what we already know intuitively: Solar panels provide pollution-free energy that delivers far reaching benefits to people, the environment, the economy, and the electric grid.

In our report, we found at least 8 key benefits of rooftop solar, all of which have real value that can be measured by regulators, policymakers, and utilities as the conversation around the future of distributed energy — solutions like rooftop and community solar — evolves.

By reducing overall demand for electricity during daytime hours that form the peak period for most utilities, solar energy production helps customers and utilities avoid investments in new power plants.

Because the price of solar energy tends to be stable over time, whereas the price of fossil fuels can fluctuate sharply, integrating more solar energy into the grid reduces consumers’ exposure to volatile electricity prices. Also, by reducing demand for energy from the grid, home and business solar systems reduce the overall price of electricity, saving money for all customers.

Distributed energy decentralizes the grid, potentially safeguarding people in one region from other areas that are experiencing problems, like blackouts. Emerging technologies, including smart meters and small-scale battery storage systems, will enhance this value.

In 2014, the electricity sector was the largest source of global warming emissions — responsible for 30 percent of all U.S. greenhouse gas pollution. Generating energy from the sun provides a renewable source of energy that produces little to no greenhouse gas emissions. In 2015, distributed solar energy alone — just solar panels on households and businesses — averted approximately 8 million metric tons of carbon dioxide emissions.

Solar can help us reduce health costs. According to the American Lung Association, 52 percent of Americans live in a place where pollution often reaches dangerous levels. As described in a recent blog post, a National Research Council study in 2005 found that health-impacting pollutants from coal- and gas-fired power plants, respectively, cost society 3.2 cents and 0.16 cents per unit of generated electricity (kilowatt-hour). With an average household in the United States using about 11,000 kilowatt-hours of electricity each year, the health cost associated with that electricity consumption would be about $350 per year if it all came from a coal plant.

The American solar industry is growing rapidly, creating new jobs and businesses across the nation. In 2015, the solar industry added jobs at a rate 12 times that of the overall economy, and as of November 2015, employed more than 208,000 people.

Our report also shows that solar panels on homes, schools, and businesses often provide more benefits than they receive through programs like net metering, which credits solar panel owners when they generate more power than they use, providing electricity for other customers. This “credit” is based on a fixed rate — often the retail price of electricity — for providing excess power to the grid, similar to rollover minutes on a cell phone plan.

Net metering has helped solar energy skyrocket in recent years, but some utilities oppose it, arguing net metering is a subsidy for solar owners. For example, in Nevada, utility NV Energy urged regulators to end the state’s net metering program.

Our report tells a different story. It shows that nationwide, the dollar and cents value of solar that homes and businesses send back to the grid is often higher than the credit utilities provide to customers.

In other words, the study shows that utilities are likely often underpaying solar panel owners, not subsidizing them. Of the 16 studies reviewed, 12 found that the value of solar energy was higher than the average local residential retail electricity rate. The median value of rooftop solar energy across all 16 studies was 16.35 cents per kWh, while the average residential retail electricity rate in included states was of 13.05 cents per kWh.

The 2016 Shining Rewards report equips electricity regulators and policy makers with peer-reviewed data that shows solar users deliver net benefits to society and the electric grid; benefits with value reflected closely under policies like net metering, which we hope will continue to support the growth of solar power.