On the occasion of Germany’s re-unification day, I thought it would be fitting to review some of the lessons I learned from Germany about renewable energy on a recent trip to the country.

It would be hard to argue that Germany is NOT the renewable energy capital of the world in terms of developing a thriving industry that contributed more than 27 percent of renewable energy generation to the grid in the first nine months of 2014.  The industry also supports more than 378,000 jobs in the country and billions in economic activity.  Germany dedicated itself to clean energy in 2000 with the passage of the EEG – the renewable energies act, which kicked off the Energiewende energy transition.  The law has been continuously tweaked over the past 14 years with a key component coming in 2011 after fukushima when it decided that it would shut down all nuclear power by 2022.

During the last week in September, I was invited to travel around eastern Germany to see renewable energy projects, interview entrepreneurs in the industry, visit companies, and enjoy a small taste of Berlin, the capital. From what I gathered there are very specific reasons that Germany has been successful at developing this thriving industry.  Our November/December issue will feature a more in-depth look at renewable energy in Germany but I wanted to share some of my initial impressions with you today.

Click through the following pages to see what I believe are important lessons that other countries can learn from Germany’s renewable energy example. 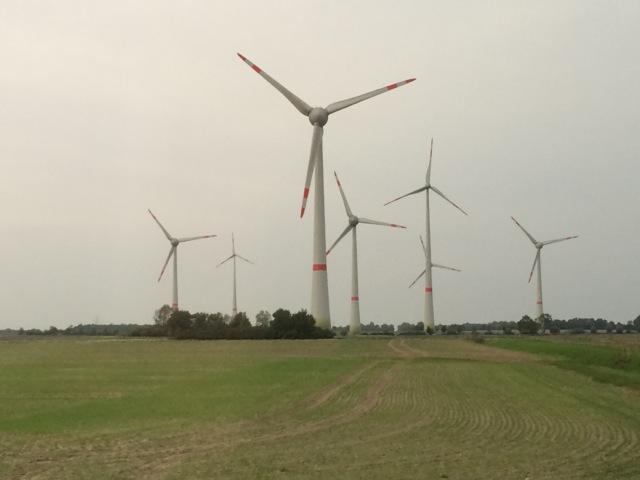 On a drive through eastern Germany, you would have to be blind to not see wind turbines.  They dot the horizon of the relatively flat country in every direction and are clearly visible from every major road in the part of the country where I was traveling (the northeast). But driving between Altentreptow and Stralsund on the north shore you’ll see Enercon’s massive 7.5 MW-turbines, enormous structures almost 200 meters high (650 feet), with a rotor diameter of 127 meters (416 feet).  The blades seem to dance in the wind at speeds of up to 34 meters per second and capture more wind energy than any other onshore wind turbine on the market today.  These behemoth onshore structures serve as constant reminders to the people of the region that they are committed to a renewable energy future and their environment is cleaner because of it. 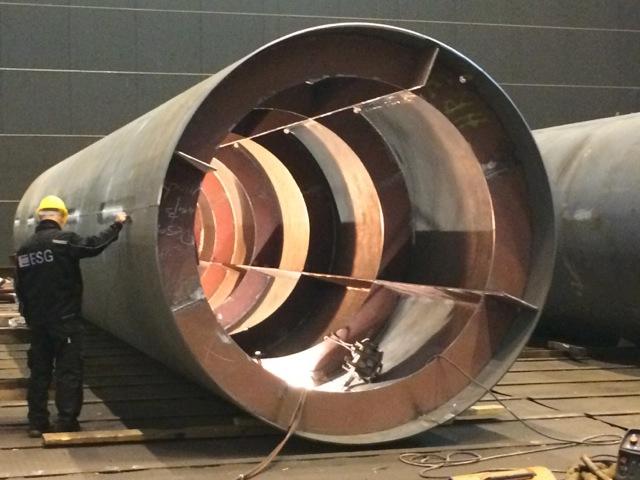 When Gicon was commissioned to develop a floating wind turbine, it turned to the oil and gas offshore drilling industry for inspiration.  The first prototype that it developed weighed 1,500 tons, the second came in at 1,200 tons and the third, which is plans to deploy next summer, is down to 670 tons – less than half its first iteration.  The company employs 300 engineers and has taken over a portion of the Straslund-based Werft Nordic Yards shipyard, a fabrication facility that at its peak had employed more than 1200 welders before it went bankrupt in 2009.  Today, welders are literally breathing new life into the shipyard as they put together the prototype.  Gicon estimates that it could build one floating offshore wind platform per week and employ up to 1000 steelworkers doing it. Once the prototype is in place and the concept is proven, the company hopes it will partner with a major turbine supplier and deploy its cheaper and easier to install floating turbine in Japan, the U.S. and all over Europe. 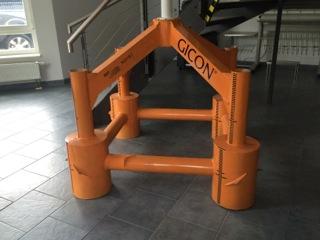 Image, top right: A worker checks the thickness of the weld on the 670-ton prototype of the Gicon floating offshore wind platform in order to ensure it will be airtight once it hits the water.

Image, left: a scale model of the floating turbine platform under construction. The section above is one of the long crosspieces in the foreground. 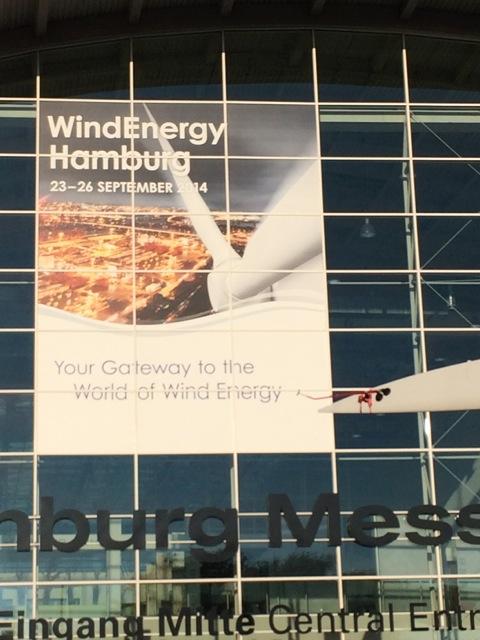 HusumWind had been one of the largest wind power events for the global wind industry, this is, until the industry itself grew too large.  When Hamburg first announced its plan to hold an annual event that would attract exhibitors from all over the world, loyal HusumWind show supporters were miffed, to put it mildly.  But after many negotiations, the organizers hashed out a plan that would allow Hamburg to host a bi-annual international event and Husum to host a bi-annual event that would be focused just on the German onshore and offshore wind market. Last week marked the first time the exhibit was held in Hamburg and judging by the number of exhibitors and attendees, it was a resounding success.

In all, more than 1200 exhibitors brought their wares to the show, representing more than 30 countries. Sigmar Gabriel, Federal Minister for Economic affairs and Energy and Vice Chancellor of Germany welcomed people to the show on Monday evening during an event held at the Hamburg City Hall, highlighting the significance of the wind industry to the region.

When a popular trade show changes its location and management, often exhibitors flee.  Not so in the case of HusumWind and Hamburg WindEnergy. While exhibitors remained worried that the traffic at the show might not be what it was in the past, they still came, set up their booths and gave it a shot.  That’s commitment to an industry, rather than one management form over another and to me, that’s an important lesson to heed.

Image: The welcome sign at the entrance to WindEnergy Hamburg. The tip of the 64-meter Nordex blade on display.

4. Keep Your Eyes on the Horizon 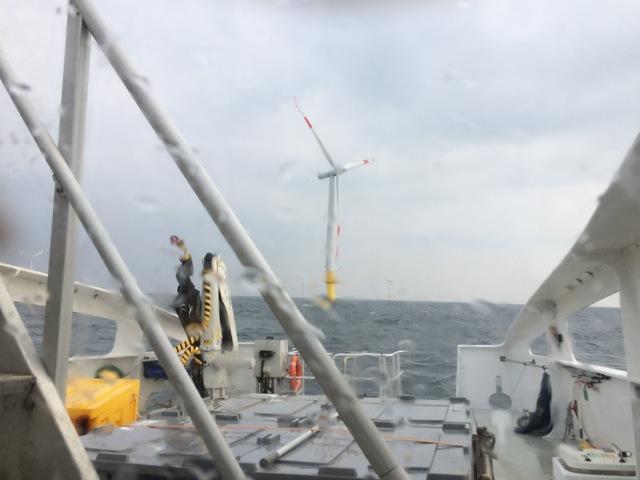 This was the advice given to us as we stepped aboard Opus Marine GmBH’s Carboclyde, a 24-meter (78-foot) offshore wind service vessel.  (Keeping your eyes focused on the horizon is supposed to ward off seasickness.)  For the wind industry, however, keeping your eyes on the horizon means planning for the future, developing solutions TODAY that will serve the energy needs of tomorrow.  Younicos, developer of a 5-MW/5-MWh energy storage solution that uses a lithium-ion, NaS hybrid battery solution that reduces “noise” on the grid, has done just that.  The solution is poised to serve the renewable energy market of tomorrow by smoothing out fluctuations on the grid caused by intermittent solar and wind power on the grid. But it works today and the company has just installed its solution in the northern German city of Schwerin.

Power-to-gas technology is also being explored by industry players in Germany like Vattenfall and Wind-projekt GMBH, who are each using wind power to make hydrogen either to power vehicles or being turned back into power for the grid. 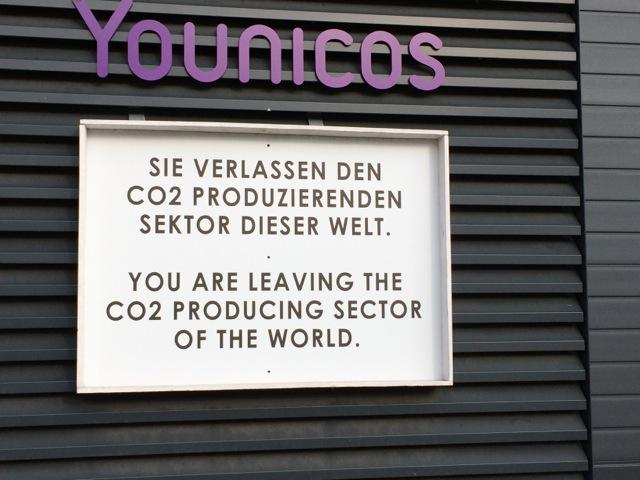 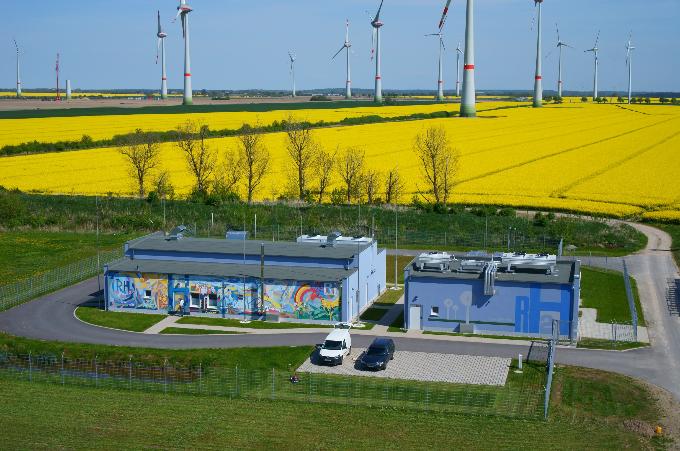 A recent study has shown that, contrary to popular belief, the German grid is so stable that storage technologies won’t actually be needed for another 20 years although many argue that isn’t really the case.  But be it today or many years down the road, when the time comes for energy storage, companies like Younicos, WIND-projekt and others will be ready with fully commercialized solutions.

Image, bottom right: The entrance to the Younicos facility in Berlin. 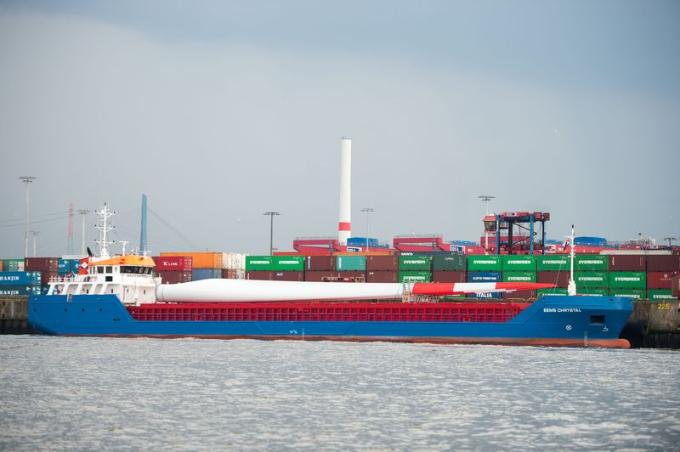 When Hamburg Wasser, the wastewater treatment plant for the city of Hamburg, wanted to be more sustainable, it didn’t settle for simply harnessing the biogas produced on its facility.  Anaerobic digesters at wastewater treatment plants are so 2011 and it was already doing that. Instead the public utility with more than 2,400 employees decided to embark on a much more difficult route by installing a 3-MW Nordex turbine at its Köhlbrandhöft site, which is only accessible by barge.

The massive turbine has a total height of roughly 200 meters and the rotor blades alone weigh 11 tons. The total investment for the project was €6.2 million but is expected to save the facility €900,000 per year for the next 20 years.  Today Hamburg Wasser generates 120 percent of the energy it needs, making it an energy positive organization. 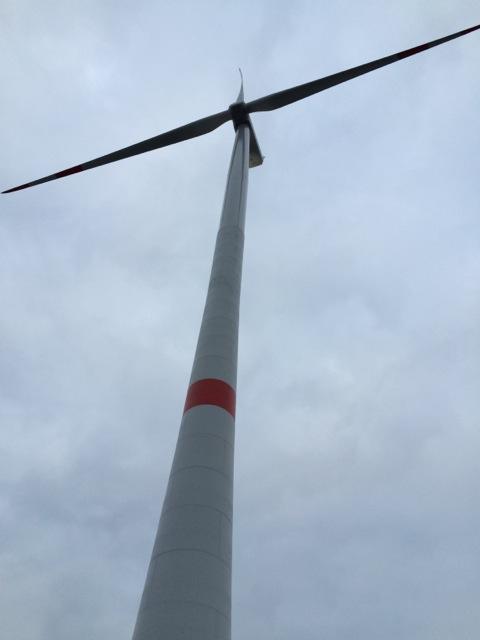 Image, right: the turbine on our visit to the plant. 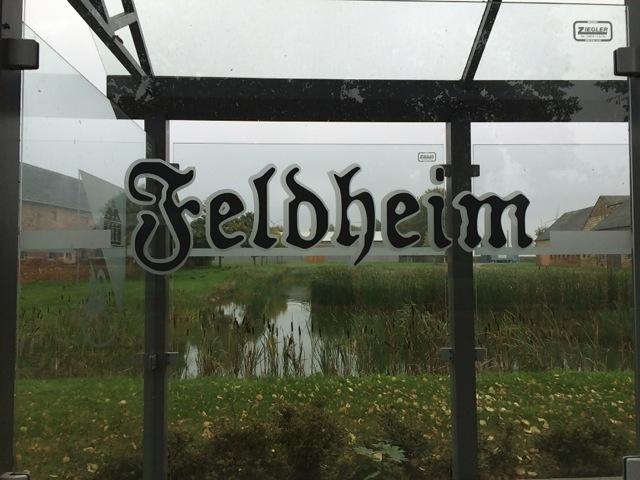 Feldheim is a tiny city with just 125 inhabitants that sits on the outskirts of Berlin in the eastern part of Germany. When Germany was divided, coal was the only heating fuel available to the people of Feldheim and once the wall came down in 1989 (the 25th anniversary of which is being celebrated today), they decided to upgrade.  Rather than spend their money on individual boiler systems, the townspeople came together and formed their own company that could purchase the output of wind farm nearby and use that power for their homes.

Further when EON, the public utility that serves the people of Feldheim, told them that they couldn’t use the national grid and purchase their own power, they were not dismayed. Instead, they built their own micro-grid around the village so now two grids are in place in their town.

And they just kept going. In 2008, the one large agricultural business in town was slowing down because potato and sugar beet prices were too high for it to remain competitive.  A decision was made to invest in a biogas system to heat the barn that housed about 5000 pigs and to grow maize and rye on the fields to be used as feedstock for the system.  And once again they didn’t stop there, deciding to expand the biogas system into a district heating system for the entire town.  All of the boilers were replaced with pipes. Two 45,000-gallon tanks hold water that remains at a constant 90 degrees C and that hot water heats the entire town.

The most remarkable part of Feldheim’s accomplishments is that in taking on this project the city not only secured jobs in the small town, it also lowered the electricity rates for the people.  They now pay just €0.17 per kWh of electricity compared to the rest of the country where rates are €0.27 per kWh. 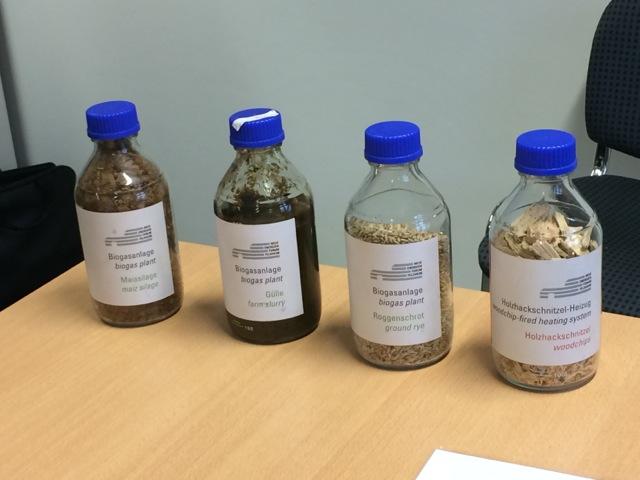 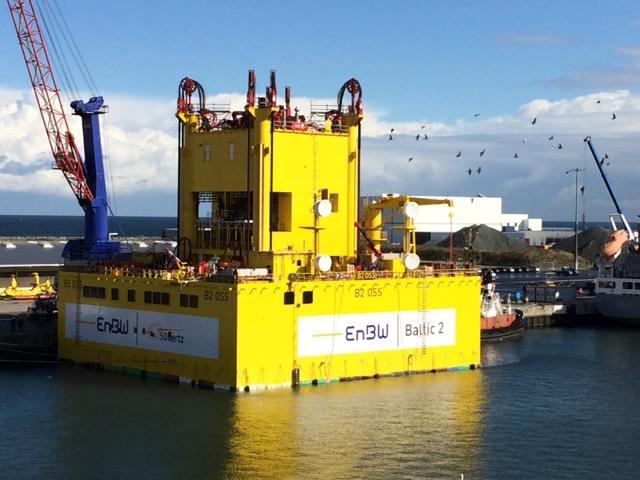 One part of the German energiewende that cannot be ignored is that fact that many support industries are coming back to life through renewable energy. In addition to the Werft Nordic Yards shipyard in Straslund that is now employing welders who had been laid off years ago, the Port of Sassnitz is burgeoning with new construction in order to meet the demand for new offshore wind terminals.

The day we visited the port, enormous turbine blades were lined up on the shore waiting to be loaded onto ships that will take them out to sea.  Giant pilings were stacked upon ships also waiting to be set in place at sea.  And a massive yellow substation – which will serve Baltic 2 – was surrounded by the four tugboats that will pull it out to its final home.

The region of Mecklenburg-Vorpommern, where this port and shipyward are located, is already home to major renewable energy companies such as Nordex and Centrosolar. But it is side industries like this that show the economic boost that renewable energy can provide  to trades that have suffered in recent years. 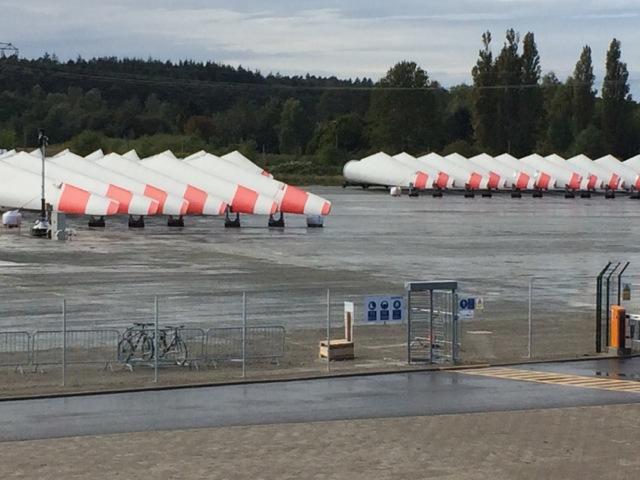 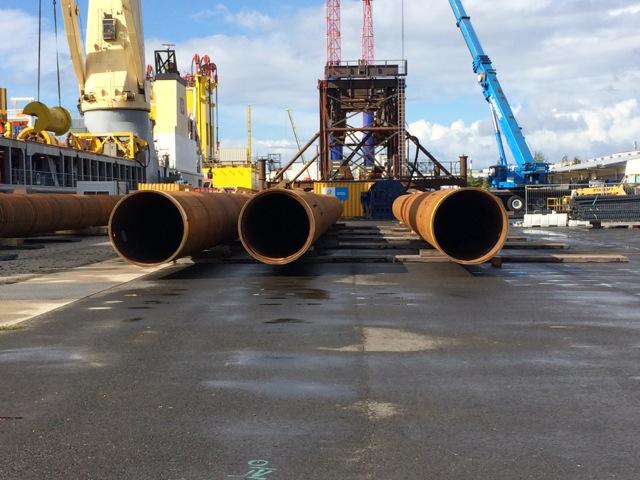 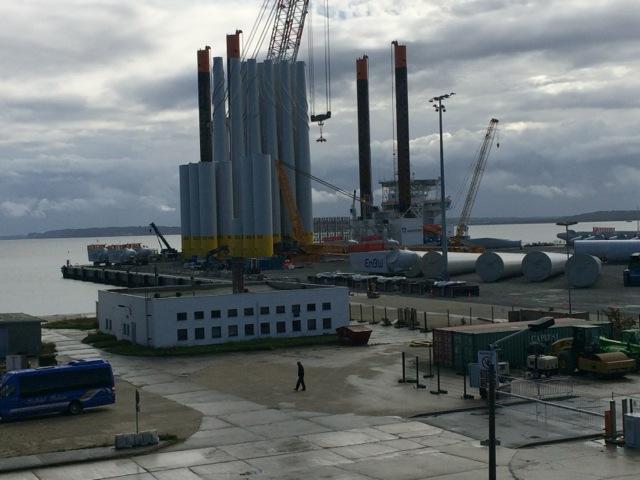