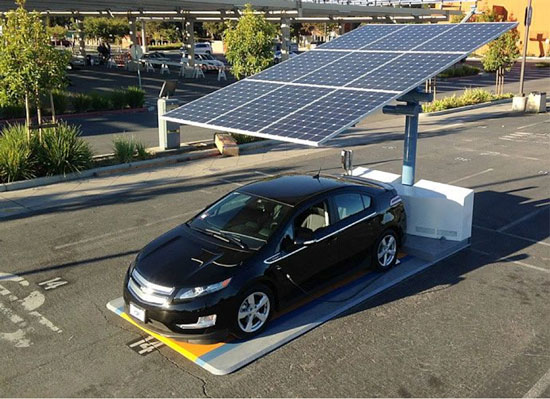 According to the Global EV Outlook 2015 published by the Clean Energy Ministerial’s Electric Vehicles Initiative (EVI), there were over 665,000 EVs on the road at the end of 2014. The U.S. represented the largest EV market (39 percent), followed by Japan (16 percent) and China (12 percent).  Furthermore, global EV sales jumped up by 53 percent in 2014 and are expected to continue to grow at a healthy pace.

EVs are a pathway to achieving a sustainable transportation industry by reducing emissions of greenhouse gases while increasing energy security. However, if an accelerated demand of EVs triggers more usage of fossil fuel burned electricity, do EVs still provide a sustainable solution to the society?

Furthermore, being an off-grid system, the EV ARC does not require any foundations, trenching, electrical upgrades or even a building permit, which are required for regular, grid-tied stationary EV stations.

“We are changing the paradigm in EV charging. We are making it possible to drive in nothing but sunshine and to deploy EV chargers in minutes, not months,” said Desmond Weatley, CEO at Envision Solar.

The EV ARC is designed to sit inside a standard parking space (9’ x 18’) and generates between 3,800 to 7,000 kWh of solar electricity annually with 9 or 12 solar module arrays. With the company’s tracking system called EnvisionTrak, the system can generate 18 to 25 percent more electricity than a fixed-array system. The system comes with a 21.6-kWh energy storage system, which enables EVs to be charged during the day and at night.

Envision’s off-grid, solar carport systems are almost entirely immune to the challenges associated with the speed and cost of deploying EV chargers. According to Wheatley, it takes much longer and is much harder to deploy a traditional charger than anyone originally assumed because of the complexities inherent in delivering an electrical circuit to locations where people want to charge EVs. Site acquisition, civil engineering, permitting, trenching, foundations, cabling, switch gear, transformer and circuit upgrades, environmental impact, business operations impact and the soft costs associated with planning all these activities are considerable barriers.

This is how easy and quick to install the EV ARC is: The company’s specialized trailer with hydraulic controls tows the ARC and simply drops it at a designated parking spot. From there, it takes about 5 minutes for the system to start working. Literally, minutes after it arrives on site “No one in the industry can touch that,” said Weatley.

This April, the company has launched the “Driving on Sunshine” campaign with the San Francisco Department of the Environment and Charge Across Town, a non-profit organization that supports the adoption of electric vehicles and reduction of carbon emissions in the San Francisco bay area and California.

Under the campaign, EV ARCs are placed in highly visible locations in San Francisco neighborhoods to demonstrate that driving on renewable electricity is emissions-free. In addition, this allows for crucial EV usage data on particular locations to be gathered simultaneously. Data such as how many EVs are charged, how much kWh are taken, how much solar electricity was charged, and whether EV drivers like driving on sunshine, is collected over a period of 3 months.  At the end of the 3 month period the EV ARC is picked up and moved to another location where the same data mining process is repeated again.

“This type of study would be impossible with traditional grid tied units for obvious reasons – you can’t pick them up and move them around and also because we have been able to place EV ARC in locations where it would be impossible to deliver an electrical circuit – meaning we have placed EV chargers where you otherwise could not have them. That’s why we say that we make the impossible possible in EV charging,” said Wheatley.

According to the U.S. Solar Carport Market 2014-2018 report published by GTM Research last year, the 2014 U.S. solar carport market was projected to be 180 MW-DC.  “The (solar carport market) represents about 10-15 percent of the commercial (US PV) market,” said Scott Moskowitz, Solar Markets Analyst at GTM Research. 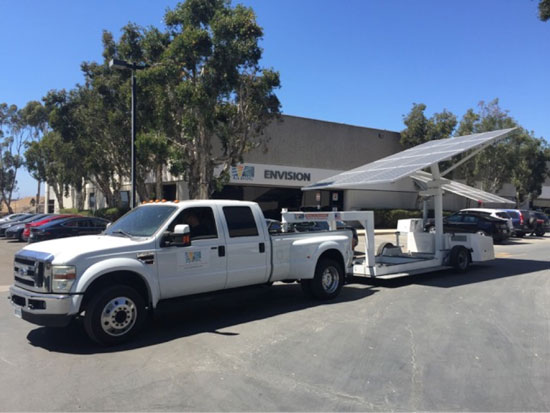 He did not have specific data as to out of 180 MW of solar carport systems, how many systems had EV charging stations or were developed solely to charge EVs, but he stated that ancillary benefits don’t drive the growth.

“The primary driver of growth in the U.S. solar carport market has simply been falling system costs that have enabled installers to provide good deals to customers. Ancillary benefits such as shading, electric vehicle charging, and advertising are attractive but they typically are not the determining factor in deciding to build a solar carport. At the end of the day, systems need to be financed and to do that they need steady revenue streams. As a result, the primary factor in deciding to install a solar carport is whether or not the system can lock in a long-term PPA or be sold at a price that will enable the customer to save money on their electric bill, “ said Moskowitz.

According to Alternative Fuels Data Center run by the U.S. Department of Energy, there are 10,307 public EV charging stations, which provide electricity from 26,589 charging outlets in the US. How many of those EV stations supply renewable energy is currently unknown, but in the near future, we may be able to select EV chargers by the type of electricity, much like we select different types of gas at a gas station.