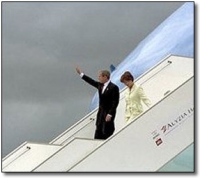 The White House released their budget request for next year (FY’05) and it doesn’t look pretty for renewable energy and energy efficiency, according to industry groups analyzing the request.