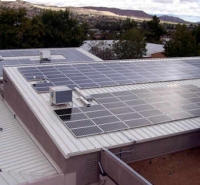 Yucca Valley, California [RenewableEnergyAccess.com] When leaders of Yucca Valley, California, started building their Community Center complex more than 30 years ago, they had no way of knowing that the sun, which shines nearly 90 percent of the time in this Southern California high desert, would one day help the town save money on its electricity bill.

However, times have changed. Energy costs have soared; PV system technology is much more efficient and reliable, and renewable energy incentive programs are much more available. With council members advocating solar energy for the town along with one of the Center’s roofs ready for replacement, the summer of 2005 became the time to invest in renewable solar energy. Using Schott Solar photovoltaic (PV) panels, working with Emcor Energy Services and leveraging federal grant money, as well as a low-interest loan and a Southern California Edison rebate, the local government discovered it needed only $20,000 out of its general fund for a project valued at $425,000. The project combines a 56.7 kW solar array and the replacement of the Town Hall/Library building’s deteriorating roof with a new one that readily supports PV systems. The system, which includes 324 Schott solar modules, sits on a new, standing seam metal roof. The modules are clamped to the standing seams with no roof penetrations. The system is expected to produce approximately one-third of the Community Center complex’s energy needs. The project, however, posed its own challenges to the project installers. “It was clear that the orientation of that building’s roof was far from optimal, however, and that it would require a great deal of work, including penetrating the roof in order to support a properly oriented system,” said Colman Snaith, P.E., senior mechanical engineer renewable resources at Emcor Energy Services. “This added to the cost. The Town Hall/Library building, on the other hand, has a near-perfect exposure for PV, although the roof of the building was ready for replacement. Fortunately, the town was receptive to an alternative design that moved the PV system to the Town Hall/Library building after we installed new roofs to support the PV array. On the whole, the project worked out rather well.”