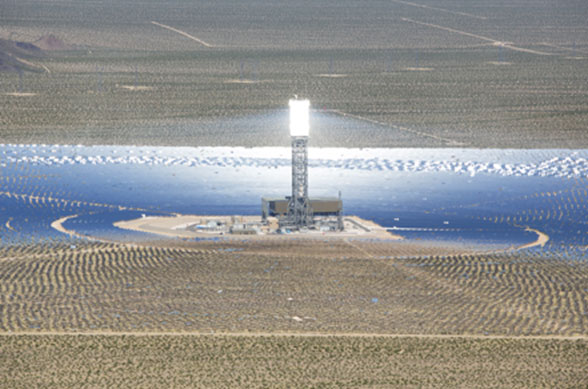 California regulators gave the owners of the world’s biggest solar-thermal power plant more time to avoid defaulting on a contract with Pacific Gas and Electric Co. after failing to supply power they had guaranteed.

The California Public Utilities Commission approved a PG&E proposal at a meeting Thursday that would avert a declaration of default through July 31 if the owners of the Ivanpah solar farm in California’s Mojave Desert pay the utility for shortfalls in generation. Ivanpah is owned by NRG Energy Inc., BrightSource Energy Inc. and Alphabet Inc.’s Google, and operated by NRG.

“Production levels have been below the guaranteed energy” required in agreements the owners signed, according to a draft resolution filed in advance of the meeting.

The commission added that the plant’s performance has “substantially increased” and is expected by NRG to continue to improve.

The threat of default brings into a question the future of a project that won a $1.6 billion loan guarantee from the U.S. Energy Department. Before winning the loan guarantee in 2012, plant builder BrightSource Energy told government officials that its cash position was “precarious” and said the project’s failure would be a “major embarrassment” to the White House.

The Ivanpah plant is “continuing to progress on its four- year ramp up,” NRG Energy said in an e-mail before the commission meeting. Forecasts show the plant can meet production targets in Thursday’s agreement, the Princeton, New Jersey-based company said.

BrightSource, which developed the technology for Ivanpah, also said performance at the facility has improved and the company expects the plant to reach to full production “as originally planned,” according to an e-mailed statement Thursday from spokesman Joseph Desmond.

In a statement Wednesday, PG&E said the proposal was “reasonable and in the best interest of our customers,” adding that the plant helps further state and federal renewable policy goals.

The forbearance agreements would end Aug. 1 unless PG&E agrees to a six-month extension. The Office of Ratepayer Advocates opposed PG&E’s plan, saying it failed to show the pacts were the least-cost option for ratepayers.

In December 2015, Power Generation Week attendees had the opportunity to tour Ivanpah. At the time, a spokesperson explained that the facility “likes perfect weather” and is “finicky.” Jennifer Delony reported that clouds, for example, have a big effect on the day-to-day operations, and predicting their type and presence is not easy. The spokesperson said NRG is working on ways to better understand when and to what extent clouds will form. Other factors, such as moisture, wind and dust, also influence the ability of the mirrors to reflect sunlight onto the thermal receivers.