More
Home Solar Why Taxpayer-Backed Abengoa is Not Another Solyndra 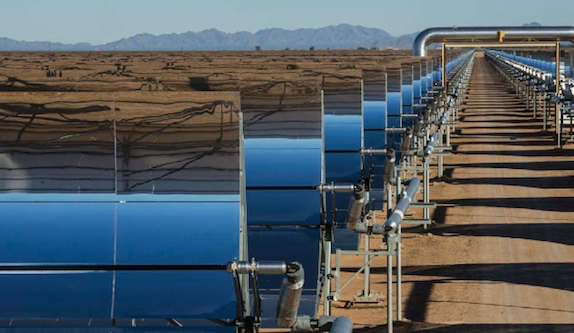 Bankruptcy within months is a possibility for the parent company of a U.S. subsidiary that received U.S. Department of Energy funding to build two groundbreaking concentrated solar power (CSP) projects.

“Abengoa is currently immersed in a process of negotiation with its main financial creditors to refinance and restructure itself in order to preserve the activity of the company, studying every project in a case by case basis,” Abengoa spokesperson Luis Rejano Flores said.

Both of those projects have been shipping solar power to the Arizona and California grids for several years, and the loans are being repaid on schedule with principal and interest, said a spokesperson for the Loan Program Office (LPO).

However, even if Abengoa does go bankrupt, the U.S. taxpayer is completely shielded from loss, because the LPO structures its loan guarantees to protect taxpayer interests, he added.

In the event of an Abengoa default, DOE is able to restrict cash distributions to private investors from Solana and Mojave, ensuring the Treasury is paid back first.

In addition, any default by Abengoa now would not affect those repayment streams because the loan guarantees are not to the parent company, but to the project finance entities, using cash flow from long-term contracts with utilities to make repayments, the LPO said. The loan guarantees are set up this way so that if any one solar developer goes bankrupt, it does not affect repayments to the taxpayer.

DOE-guaranteed loans to build solar projects are very safe because they have a power purchase agreement (PPA) with a U.S. utility – a commitment to buy the power at a preset price for about the next quarter century.

The success rate of the LPO loan guarantees beats that of most VC funding. The LPO said losses represent only 2 percent of the overall loan portfolio, and repayments in the first few years are now over $6 billion, with decades of repayments to go.

Guaranteeing the income from an operating solar project – with a guaranteed contract, and with an investment-grade utility – is a safe bet.

By contrast, Solyndra’s loan was inherently riskier, as a loan to a manufacturer who must make future sales to repay it. If there are no sales, there’s no income.

“There’s a big difference between this and Solyndra,” Tom Konrad, clean energy portfolio manager and AltEnergyStocks.com editor, said. “Solana and Mojave have revenues and almost certainly will, in one year and 10 years. Solyndra did not.”

That difference is due to the strength of U..S contract law. Solar contracts with utilities are set in stone in the U.S.

It Is Up To Governments to Not Bankrupt Clean Energy

One reason Spain’s Abengoa is in financial trouble is that contracts for energy from solar projects were retroactively overturned by its government. Most of Spain’s smaller solar companies went bankrupt. Abengoa merely held out longer.

The Spanish government essentially bankrupted its entire solar sector by reneging on agreed tariff payment rates. (There are parallels with how the U.S. congress bankrupted the firm which had to sell the first-ever CSP project in California, SEGS. The congress under President Carter provided solar incentives which encouraged the Israeli-developed groundbreaking new “solar thermal” power plant. Under Reagan, they were retroactively slashed.)

But there is no possibility of that reoccurring, due to legally protected 25-year and 30-year contracts.

“No matter what happens, no one is going to shut Solana or Mojave down,” Konrad said. “No matter who owns it, they will want it running and producing power; just like the SEGS are still producing power despite many changes of ownership over these 30 years.”

By contrast, Abengoa’s just-begun project in Chile will be sold, insiders said. Chile’s Atacama-2 is a 210 MW hybrid – half PV; half CSP with storage. It also includes a small 30-minute battery, to provide a spinning reserve for the first half hour while its turbines ramp up to ship night time solar from the CSP storage.

CSP – without storage – was 21 cents per kWh when the Obama administration ramped up support to make wider-scale adoption lower cost – and it has. In under 20 projects later globally, the most recently awarded bid, in 2015, was Atacama-2 at 9.7 cents – and that includes 17.5 hours of storage.

The only other firm developing combined PV and power tower CSP with energy storage is a U.S. developer, California’s Solar Reserve, which built Crescent Dunes. SolarReserve also has a Chilean permit combining PV and CSP in a 260 MW project at Copiapó, and expects to price it at “well under” 10 cents per kWh in the next bidding round. Solar insiders say the U.S. firm is the likeliest buyer to bring Atacama-2 to fruition.

Over the years, Abengoa has contributed up to half the cost of its DOE SunShot Initiative research awards, beginning with advanced mirror engineering, and now with high temperature thermal storage.

“Abengoa have been a major force in the R&D in CSP,” Tex Wilkins, former director of the DOE CSP program, said. “They’ve certainly been a good partner with the DOE; even when I was there.”

He noted that the advanced technologies research that Abengoa helped fund at DOE benefited taxpayers with cheaper solar.

“Not only in the U.S., but worldwide; because the research tends to cascade down to other developers: that certain technologies work better than others,” he said.

“The research and development resulting from awards to Abengoa Solar helped contribute to lowering the cost of state-of-the-art CSP technologies by 7 cents per kWh from 2010 to 2013,” he said.

US R&D Funded by Abengoa Will Go On

As recently as September, Abengoa had received two SunShot awards, with the firm covering half the cost.

One testing molten salt as a heat transfer fluid in the collector field itself, and the other developing a receiver capable of handling higher temperature heat transfer fluids of 1,100 degrees Celsius and above. The first milestone-based payments were not to be due until January 2016, but they will be cancelled.

“In the case of the R&D projects under the SunShot Initiative by the DOE, Abengoa will not be able to continue to perform under these awards,” Flores said. “Abengoa is working with the appropriate authorities to close out the projects properly.”

The firm’s earlier high temperature storage materials research – together with NREL and the Colorado School of Mines – begun in 2014, scheduled to be complete in 2016, could also be affected.

A source close to the research did said that Abengoa’s demise would not be a complete loss, at least on the technical side.

“These researchers won’t just stop existing,” she said. “They will go work for other companies.”

So the U.S. taxpayer is the winner. There are built-in taxpayer protections if Abengoa does go bankrupt. Solana and Mojave will continue repaying taxpayers for the next quarter century. It is a U.S. company that is now best-suited globally to take over Abengoa’s groundbreaking Chilean power tower and PV project. And the R&D co-financed by Abengoa will continue to benefit the world with lower-priced night time solar.