There are many organizations in the energy space, and ILSR’s climate and energy advocacy overlaps substantially with the many other players who care about a cleaner energy system. But our approach isn’t the same.

Rather, our vision is that communities enrich their local economies by being masters of the transition to 100% renewable energy. This approach works best not only because it marries authority and responsibility, leaving communities in charge of their own fate, but because it is a political strategy that builds a movement for more ambitious and rapid change in the energy economy. It’s a vision we’ve been helping implement for over 40 years.

Consider the situation. The forces arrayed against a clean energy economy are large, powerful, well-financed and ultimately have a vested economic interest in resisting change. Our success thus far has been largely on the margins—even now, just 12% of electricity in the U.S is from renewable energy. Truly transformational change will require the incumbents to lose ground on their sunk investments in power plants that burn things and fuels that pollute. That represents $28 trillion in value (or more) that they must be forced to abandon.

Victory comes through countervailing political power, which requires a mighty movement of morally and economically motivated Americans to compel these companies to release their grip on this financial windfall.

But movement building won’t happen by simply transitioning a multinational corporation from one extractive energy generation method to another. Motivating Americans across the political spectrum requires a vision the unites Tea Party opponents of monopoly electric companies with Greenpeace opponents of oligopoly fossil fuel companies. This vision requires three crucial elements, which are our goals for the energy system: human scale, local ownership, and democratic authority. 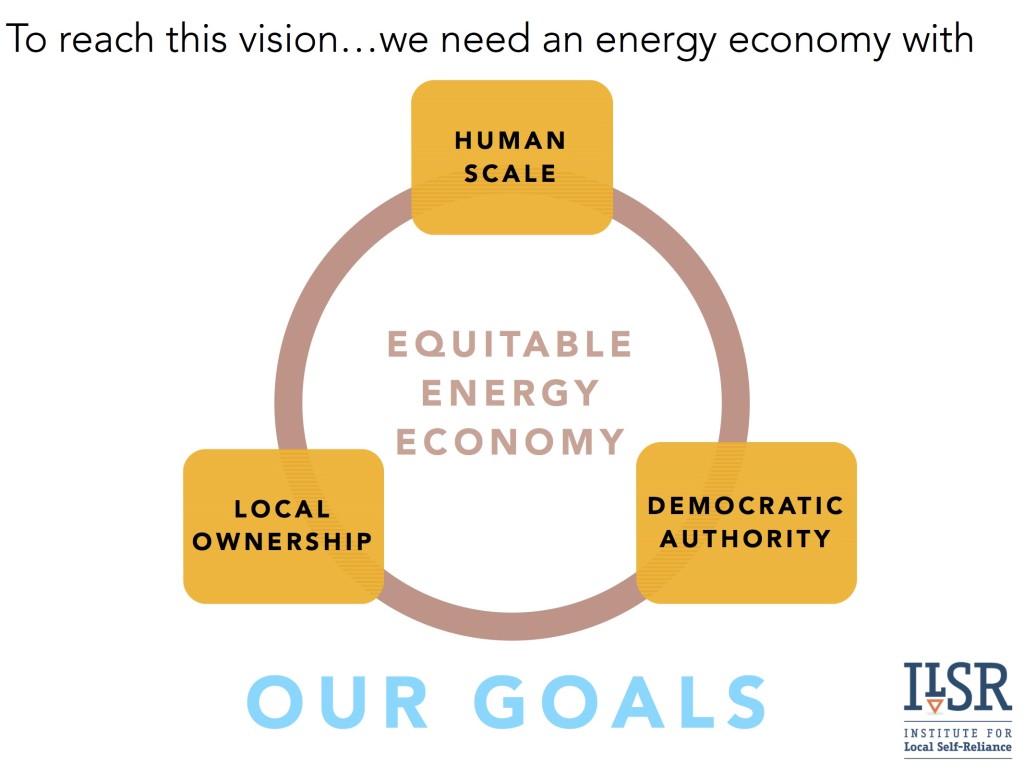 These three elements rely on each other:

Pursuing an equitable energy system that is community-owned and community-driven means a different approach to energy policy than most advocate. We desire energy policies that:

Together, these approaches accelerate our progress toward a 100% renewable, climate-friendly energy system even better than the traditional tools. That’s because rules that create an equitable, local energy economy will give more Americans a vested, economic self-interest in the 100% renewable energy transition and not just a moral or emotional one. And given the 28 trillion reasons the big fossil fuel interests have in resisting this transition, we’re going to need every energy American we can get on our side.