More
Home Solar Where Solar Energy Stands After the Election 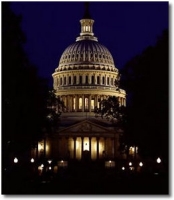 Washington D.C. [RenewableEnergyAccess.com] While there are certainly some renewable energy proponents disappointed that President George W. Bush was elected to another term, his re-election, and particularly the Congressional elections, are likely to bode well for the solar energy industry throughout the next four years.

“The President has consistently supported tax credits and federal procurement funding for solar,” said Rhone Resch, Executive Director of The Solar Energy Industries Association (SEIA). “We look forward to working with the Administration and the new Congress as we look to significantly expand the role that solar plays in our energy portfolio.” In fairness, the solar measures have been small so far, but SEIA said they are looking forward to a renewed commitment from the Bush Administration to include solar energy provisions in any upcoming energy legislation. While Senator John Kerry had some rather bullish plans for renewables, including a national Renewable Portfolio Standard (RPS), industry sources tell RenewableEnergyAccess.com that it is not likely that Kerry would have been able to push many initiatives through a Congress under even stronger Republican control. Furthermore, facing this atmosphere of partisan opposition in the Congress, Kerry would have been unlikely to bring energy issues to the top of a constrained list of policy priorities. Comprehensive energy legislation was a top goal of the first Bush Administration and will be a key part of his second term’s agenda as well. President Bush and Republican leaders in Congress have already indicated that energy security and reliability legislation could be developed early in the 109th Congress – and they’ll now have extra Congressional muscle to try and push it through. The Congressional appointments secured on Tuesday are particularly promising for the solar industry with SEIA pronouncing that “all incumbent solar champions were re-elected.” The industry group extended congratulations to many notable solar energy champions on their re-election to Congress, including Nevada Senator Harry Reid. In the House, Renewable Energy and Energy Efficiency Caucus co-chairs Zach Wamp (R-TN) and Mark Udall (D-CO) will return, as will other solar advocates such as J.D. Hayworth (R-AZ) and Jay Inslee (D-WA). “We did not lose any of our solar champions in the House and Senate, and many of those champions are poised to assume greater leadership roles in the next Congress,” SEIA said in a statement. While Senator Tom Daschle’s election loss was a stinging defeat for Democrats, his likely successor as Minority Leader is Senator Reid, a proven advocate for solar. Minority Leader is a key leadership position for the Democrats. Industry insiders in Washington said Reid has some of the most active and well-informed renewable energy staff on Capitol Hill and that it would be to the solar industry’s advantage to have him in that leadership position. Zach Wamp, co-chair of the House Renewable Energy and Energy Efficiency Caucus, is likely to become Chairman of the House Appropriations Energy and Water Subcommittee. Wamp is also reputed to have a staff that is active and enthusiastic regarding renewable energy issues, and should he secure that chairmanship position, is likely to be a major ally and key figure to push for solar R&D funding. And it’s not just incumbents with the potential to help solar out. Another possible solar champion is popular newcomer to the Senate, Illinios’ Barack Obama, who supports a national RPS of 20 percent by 2020 that includes solar. The next four years may not be what all renewable energy advocates had in mind – particularly the devout environmentalists among them – but solar energy and other renewables may end up coming out alright in the end.