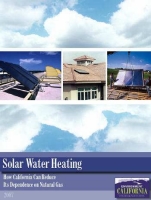 Environment California’s April 2007 report is titled “Solar Water Heating: How California Can Reduce Its Dependence on Natural Gas.” The group, dedicated to protecting California’s air, water and open spaces, has long been a proponent of legislation in California so effective in supporting renewable energy, especially solar PV. Now the focus is on solar thermal.

In the report, written by Bernadette Del Chiaro, of the Environment California Research & Policy Center, and Timothy Telleen-Lawton of the Frontier Group, the authors explain how “solar hot water could save California 1.2 billion therms of natural gas a year, the equivalent of 24 percent of all gas use in homes. To prevent global warming pollution, reduce dependence on imported fuel, and ease the price of natural gas, California should act now by jumpstarting a mainstream market for solar hot water.” Introduction California’s reliance on natural gas is a growing problem. Whenever the price of natural gas has spiked over the last few years, Californians have had to pay more to cook, heat water, and stay warm. And unlike most other states, more electricity consumed in California comes from natural gas than any other source, meaning high natural gas prices create a double whammy in utility bills for households and businesses. California consumes even more natural gas than gasoline; oil is not the state’s only fossil fuel addiction. California has established a reputation as a leader in reducing fossil fuel consumption over the last few decades. The state has used efficiency standards to get more done with less energy, and has championed clean and renewable sources for the energy we do use. Since the nationwide energy crisis of the 1970s, for example, energy consumption per capita in California has remained relatively constant while American energy use overall has skyrocketed. And with rising awareness of global warming and its consequences, California recently became the first state to pass a mandatory cap on global warming pollution. However, more remains to be done. Today, California relies more heavily on natural gas imports than it ever has in the past — more than 85 percent of our natural gas now comes from out of state. But while our overdependence on natural gas poses serious economic and environmental problems, solutions do exist. California can once again take the lead in promoting energy-saving technologies — this time by expanding the use of solar water heating. Solar hot water systems can save more natural gas in California homes than any other technology. These simple systems use solar energy to heat water, work that is usually done by natural gas today. Since natural gas is expensive and sunshine is free, solar hot water saves money as well as fuel. Tragically, the technology is severely underused in California, despite abundant sunshine. Austria, for example, with a climate similar to Minnesota, installed over 40 times as many solar hot water systems as California in 2005, despite having less than a quarter of the state’s population. With appropriate incentives, California can jumpstart a mainstream market for solar hot water, much like we have done for solar electric technologies, to reduce the state’s dependence on natural gas. If history is any indication, the move could lead other states to do the same and even inspire action at the federal level. California should capitalize on this opportunity to build on its record of leadership toward energy independence and global warming solutions.